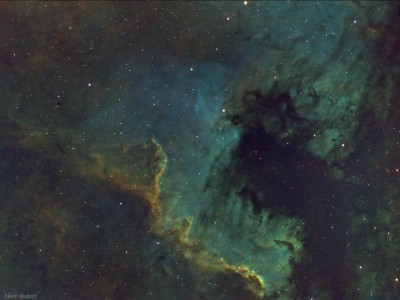 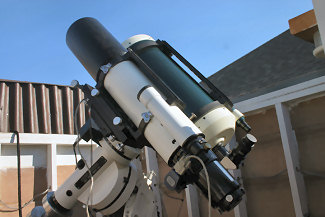 [ARTICLEIMGR="1"]The VMC260L is one of the new instruments recently offered by Vixen through their dealers. The scope is the big brother to the VMC200L and the smaller brother to the new VMC330L. The 260L is primarily intended as an imaging platform to deliver a fairly large flat field that is aberration free useable for larger CCD, CMOS or emulsion based imagers.

This design uses a spherical primary and secondary with a field corrector lens mounted directly in front of the secondary mirror. The primary is 10.25” in diameter and the secondary is a hefty 3.4” diameter or 34% of obstruction. There is no full aperture corrector as with other catadioptric system designs. 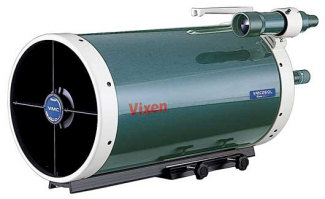 A major difference between the smaller 200L and the 260/330 instruments is the use of a moving primary. The 200L has a fixed primary that limits the end user on back focus consuming (e.g., focal reducers, OAG, Rotators) devices that are used in imaging systems today. The moving primary focuser is similar in concept to the typical SCT layout with a knob protruding from the rear cell of the OTA.

The OTA has the very clean and fit look typical of Vixen instruments. It uses the deep metallic green base color on the tube and the cream white metal end ring for the front and rear cell. The OTA is 26” long and 12” O.D. (the rear cell and front cell are .3” larger in diameter. The tube assembly is open in the front allowing quick cool down and equalization of the optics (but will conversely allow dust onto the primary easier). The dust cap is the color of the front/rear cell and is constructed out of aluminum material. The front/rear cells and dust cap are pebble baked surface giving some texture and minimizing a shiny surface look. The rear cell has a Vixen dovetail insert for the finder scope, and a single screw that locks in the dovetail. The rear cell has a 67mm o.d. flange that accessories mate to.

The OTA comes with a 2” adaptor ring on this flange that is less than 1” long from the back of the rear cell. The provided 2” adaptor uses 2 finger type screws to hold your diagonal or camera. 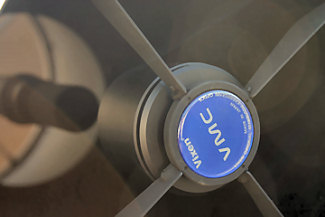 The front of the OTA has a very large spider to hold the rather heavy secondary mirror and lens assembly. The vanes of the secondary are 0.1” (3mm) thick and they produce a fairly obvious diffraction spike set on bright stars.

The inside of the OTA is velvety dark, a really well done paint job that limits reflections well. The secondary is near the front of the OTA where the front surface lies 4” behind the front of the tube. I have not seen any dewing issues on the secondary yet but may get a Kendrick strip to insure dew does not become an issue. The secondary has a baffle that extends 1.1” inches beyond the front surface of the secondary optics. The main mirror has a 2.1” inch diameter baffle that is well machined and has reflection dampening groves on the interior surface. The main mirror rides on the 10.5” inch long primary baffle (as with other SCT designs).

The OTA comes with an 8x50 non-illuminated finder and mounting post that attaches to the dovetail slot on the rear cell as noted earlier. The finder is well made, comes to crisp focus and maintains alignment to the main scope. The scope also comes with the 2” adaptor for the rear cell flange that has 2 screws to hold the accessories into the scope. The adaptor seems ok initially but I do not like it not being compression type. In addition this ring is 0.35” inches long and lies too close to the rear cell to allow my fingers to tighten the screws when a diagonal or camera is attached. There is a 2” extension available and it is really needed to make this more useable. Sadly this is one of those really inexpensive items that could have been easily improved. The OTA also comes with the Vixen flip diagonal that allows two 1¼ eyepiece (or camera/eyepiece) to be ‘focused’. This may be of interest for planetary imaging. 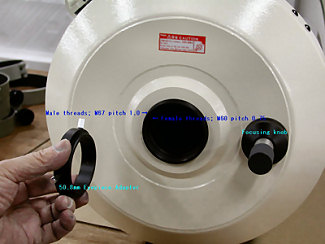 The OTA is shipped with a fitted Vixen dovetail rail. This rail is smaller than the industry standard Losmandy plate but if you have one of the vixen mounts it will slide right on and is well made.

Collimation is done only with the secondary. There are 3 push-pull screws mounted on the spider that use an allen head wrench to move. These screws are behind a plastic Vixen logo plate. The logo plate is held in place by ‘stick-um’ type adhesive. If you were to need to move this plate often, I think the stick-um would fail. With that in mind I added a small piece of Velcro on the back of the logo plate and the secondary to hold it on. There is no collimation using the main mirror (another difference from the smaller 200).

I placed my order for the VMC260L from Anacortes and was given a 3 month lead time for delivery directly from Vixen Japan. I was told that there were no other 260L’s in North America and there were no known users in Europe (aside from a single vendor who had a pre-production unit for evaluation). I did a thorough web search for other users and found nothing out on the net. This made me a bit cautious as the price of the scope is significantly higher than a typical SCT, but then again significantly lower than a true RC. I was told to contact Vixen North America for questions and Mike at VNA was very helpful in asking questions directly back to Vixen Japan. 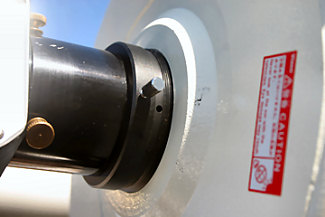 I got an email at almost exactly 2 months into the wait telling me it had left Japan on a boat and would be arriving in the US the following week. The scope arrived but took another 10 days to go from LA to NY (Vixen NA). But I did have the scope 1 week earlier than the 3 month wait time estimated. The scope arrived directly from VNA in a very rugged cardboard box with another rugged box inside. Inside this box was a dense Styrofoam cradle holding the OTA (that was wrapped in plastic). There was no damage to the OTA, surviving a trip from Japan to NY to my home in Texas.

I removed the OTA and removed the Vixen dovetail assembly, replacing it with a set of Parallax 12” ID rings. I mounted a Losmandy 19” dovetail plate on the top and bottom of the rings. The rings ride between the front and rear cells with an inche and a half left for balance adjustment.

I mounted the OTA and ring assembly on an AP1200 in an observatory and allowed the instrument to cool down for an hour. I then began collimation. The scope was significantly out of collimation but it only took me about 30’ to get it collimated. I went to almost 600x for collimation and have not touched it since then.

Focusing is very smooth with the main mirror focuser, I initially racked the focuser all the way in and out to seat the system. The focusing mechanism is well made with only about a 7” movement at 600x when changing directions. 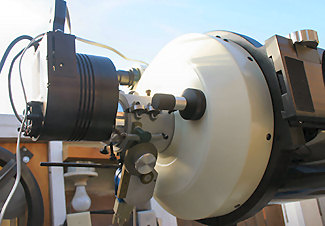 Optical quality for deep sky viewing is superb. With a Panoptic 35mm the edge of field is very sharp focus and flat image. The stellar views are similar to my TEC140 refractor. The background is slightly less black than the TEC. I tested them side by side looking at the first star I could find from the illuminated surface of the moon. The VMC260L did a very good job at blackening out the moon’s glow. Using a 5.4mm Pentax Mars had significant details and the dust storm was easy to spot.

The optical focus ‘snaps’ into place. I have not had this experience with other SCT scopes. But this instrument does it really cleanly.

I had an adaptor made (by VSE) to go from the rear cell flange (67mm od) to my VanSlyke Monster Focuser with Robofocus. I also made an adaptor that uses an old 12mm Kellner eyepiece to find approximate focus for the imaging platform. That way I can put the VSE focuser at the half way point and focus roughly using the main instrument focuser. This allows me to swap from visual to imaging quickly.

I use a SBIG ST2000XM camera with a CFW8 as my imaging platform. In addition I use an AP .67x focal reducer which when added to my imaging train reduces the scope from f/11.6 to f/8.45. The field is very flat and smooth.

From my first image I knew that this scope was going to be a lot of fun for imaging (see some results on my website http://kasism.home.comcast.net ). So far it has not disappointed me at all. I have been also very pleased as I have gone three days using the scope without having any refocus needed (after 1 hr cool down). This indicates very good thermal stability. 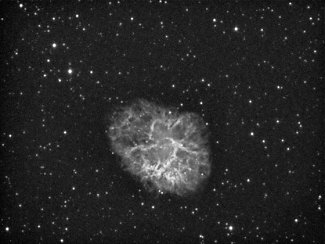 A quick summary of the key points;

Is this 10.25” worth almost $4000? So far I believe the imaging use of the scope is superb. Having owned C11, M10, C14 and numerous other instruments I can heartily say that this scope is a strong performer for imaging. I am not much of a visual user but visually the images are extremely pleasing. If your primary goal is imaging, this OTA is a very good optical step above the SCT/RCT and approaches the more expensive astrographs in quality.