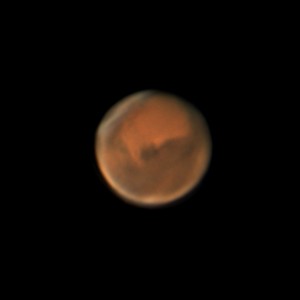 I have two telescopes I've built over the past year that have an interesting commonality - I paid the same for the "new" primary mirror in both.

I've just recently completed the telescope for the Discovery mirror, and it seemed a good opportunity to put these similar yet different mirrors to the test. The biggest question for me was how much better would the quality of the Discovery mirror be? The test was made more interesting in that both mirrors have exactly the same focal length - 59" - so using the same eyepiece I get the same magnification/view.

"Hubble" is in a truss dob following the Obsession design. For the thinnish mirror I built a 6 point flotation cell with a sling. Simple two-vane spider. Finish off with a new matched secondary, RP focuser, a 9x50 finder scope, and a red dot finder that I use way more than the finder scope.

"Discovery" is in a truss dob as well, but instead of a square box for the primary and a cage for the secondary, these parts are both made from a coopered cedar tube. I built the same six point flotation cell, but I glued the mirror to the points using silicon caulk (not ideal, I know). Four vane curved vane spider. New Discovery secondary, same RP focuser, and this time only the red dot finder because I never use the finder scope.

Hypothesis/Theory
Well, the Discovery mirror actually costs ~600 new from Discovery. I think it should be noticeably crisper than the HubbleOptics mirror, especially with the curved-vane spider. However the HubbleOptics mirror has 56% more surface area. I would think that I should see more dim DSO's. I'm very curious to see which shows more detail on brighter DSO's, like the whirlpool.

Both telescopes were placed outside in a gentle breeze at dusk and collimated. The testing was done three hours later at 10:00 pm. The night was pretty good for seeing. I could clearly see the milky way down to about 30 degrees from the horizon. Stars near the horizon were twinkling but pretty steady overhead. No moon but enough light pollution that I can see my shoes as well as the trees, telescopes, chairs and what-not in the yard.

Second Test - high magnification
With the 10mm plossl and barlow I'm at 300 magnification. Focusing on Beta-Cassiopeia, the star is not a crisp point in either scope. The star may be a tiny bit crisper in Discovery, but only a tiny bit if at all.

Third Test - M13 Globular Cluster in Hercules
Using a Meade 26mm super Plossl (58 magnification) I easily locate M13 in both telescopes. M13 is bright, and many many tiny crisp points of light can be seen within the cluster. Moving the eyepiece from scope to scope, I cannot discern any difference between the two views. Discovery seems easier to bring into focus, but once I get that focus "sweet spot" with Hubble the stars in M13 seem just as crisp. I don't think I'm seeing any more stars in either scope, and the apparent size of the cluster seems equal.
I swapped out the 26mm for the 10mm and focused on M13. The cluster was noticeably dimmer and filled the field of view.I think it seemed a little brighter overall in Hubble, but the views were again virtually identical. Stars were not perfectly crisp, but they were equally as not crisp.

Fourth Test - M57 Ring Nebula
Put in the 26mm and move over to the Ring. The ghostly donut is easy to locate in both scopes. With averted vision you can see the ring shape, though looking right at the ring the dark central area is harder to make out. The view is again virtually identical in each telescope - same brightness, same crispness. The background "haze" may be a little brighter in Hubble.
I noticed an asterism of three tiny stars near the ring that I could just barely see in Hubble. I thought "I bet I won't be able to see that in the 10". Moved the eyepiece over to Discovery, and sure enough, they were right there, just as bright.
Put in a Sirius 40mm plossl and focused on the ring. With this low magnification the dark central area of the ring was lost in the Discovery, except in fleeting glances with averted vision. Same eyepiece in Hubble and you could more easily make out the donut shape than in the Discovery.

Fifth Test - Dumbbell Nebula
Back to the 26mm. Once I found the right area of the sky, the dumbbell Nebula popped into view, bright and obvious. I found it first with Discovery. Looked more like a fuzzy basketball than a dumbbell, but you could make out the dumbbell shape if you were looking for it. Switched over to Hubble, and the dumbbell shape was more obvious but only slightly. Overall pretty similar view.

Sixth Test - Whirlpool Galaxy
I pulled up the whirlpool first in the Discovery. A brighter fuzzy blotch next to a dimmer fuzzy blotch. Can't really make out the spiral shape. I know I've seen a better view than this in the Hubble in the past, so I'm optimistic I'll see a difference as I move the eyepiece over to the Hubble. Nope, once again, same exact view. Too much light pollution today to see any detail.

Seventh Test - Triangulum Galaxy
I've never looked at this galaxy before, but checking the star chart it should be placed pretty well in the sky. Its to the east about 45 degrees up (just above a bright town) Took me a while to find it in the Hubble - just a very dim very fuzzy blotch. Once I found it and knew what to look for I found it quickly in the Discovery. I think it was a bit dimmer in the Discovery...I don't know if I would have found it with the Discovery if I hadn't found it in the Hubble first and knew what to look for.

Eighth Test - NGC 752 and Colorful Double Star near NGC 752 in Triangulum
This is described in my old night sky magazine as "Sprawling clan of faint stars next to colorful double star". Yup, sure is. Found it easily in the Hubble. I thought it would be good to compare the color of the stars in the two scopes - thinking the larger mirror would show more color. In the Hubble I see a pair of stars, one white/blue and one orange/yellow. Very nice actually. Switch over to the Discovery and the view is once again identical. Same clarity and color contrast between the two stars.

Conclusions:
Very interesting and surprising for me. The two mirrors might have as well been identical. The Hubble in a couple places showed fainter objects slightly brighter and more clearly, but only by a tiny bit. The Discovery snapped into focus easier and seemed a little crisper on brighter objects, but again only just barely. The Discovery mirror is in my opinion better quality, allowing it to compete perform as well as the larger mirror. Considering the price of the HubbleOptics mirror, its a good quality mirror and a great value.

So would I buy another hubbleoptics mirror? What I am going to do now with two virtually identical telescopes?
Well, the plan is to sell one of the scopes and buy a 16" hubbleoptics mirror...unless I can find a good deal on a used name brand mirror.

Please feel free to email me with comments or questions.