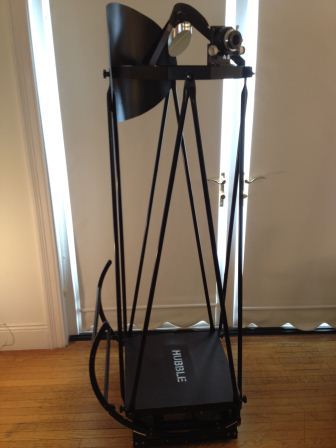 Please note that this review is for the structure only ($1,195), as I supplied my own primary and secondary mirrors as well as the focuser that otherwise comes with the complete telescope. Therefore, I will be commenting on the structure itself, rather than the quality of the optics that the manufacturer provides with the complete unit. I also ordered the nylon shroud for an extra ($85), and paid the extra air freight, because ground shipping was going to take almost three months. As a result, it only took a couple weeks from when the product was shipped until it arrived on my doorstep.

My initial impression opening the box is that this is a well-packaged, professionally-finished piece of equipment. The rocker box and mirror box are pre-assembled with black anodized aluminum. All one has to do is some minor assembly on the upper cage, and mount the mirrors. After using it for a month, I'm still very satisfied with the quality of the materials and the workmanship. I have made a lot of little refinements to improve its functionality for me, but many might consider these tweaks optional.

Working from the bottom up, the design of the rocker box (left side of photo below) is very elegant. The rectangular frame is constructed of black anodized aluminum, and measures approximately 18" x 22" x 4" high. The azimuth ring is 20" in diameter, and very low profile, being only 1/2" in height. I wanted a scope I could use without a ladder, so this is a key feature that attracted me to this structure. To that end, I cut down the threaded posts of the three adjustable Teflon feet so I could use them at minimum 1/2" height without the upper end of the posts interfering with the azimuth motion [Modification # 1]. 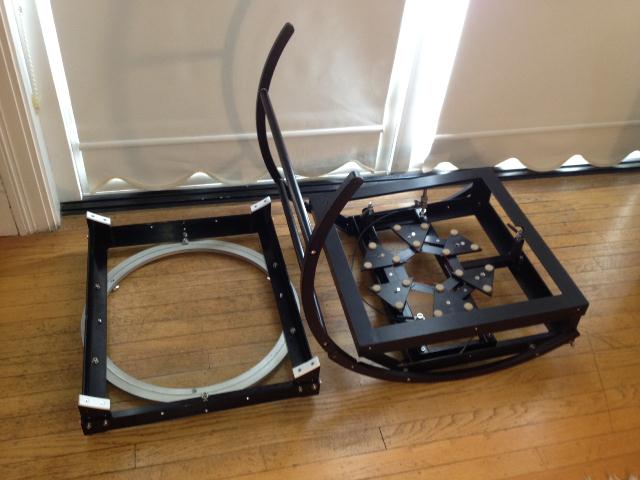 Speaking of the azimuth motion, the ball bearings between the two concentric rings rotate very smoothly; too smoothly in fact, offering little resistance to motion. Just bumping the eyepiece with your eye socket can send the scope spinning off your target. Hence, I added a little braking action with some 5/8" diameter soft plastic pads. It is a little difficult to describe, so I took a photo (see below). I inserted two bumper feet on bolts that thread into holes that were already tapped on the bottom inside of the inner ring. They rub against the inside of the ring and supply the needed resistance [Modification #2].

Incidentally, the plastic (or rubber) bumpers were my third attempted solution, after felt installed between the frame and ring got balled up and prevented the ring from moving at all; and metal washers - installed where I finally put the bumper feet - seized up against the metal azimuth ring when the outdoor temperature dropped and the azimuth ring contracted against them.

The other rocker box refinement I made was to carve out a notch on either end of the rocker box (shown just to the right of the Plastic Pad package in the above photo) to allow a collimation hold-down bolt to pass through the frame when the scope is near vertical [Modification #3]. I only gained about a degree of vertical motion, but I hate getting close to a target that is straight up, and having to rotate the whole tube 180 degrees and re-find the object. After moving that extra degree, there are a couple stop bolts preventing the rocker arms from going too far and sliding off the Teflon bearing pads.

Next up is the mirror box (see right part of photo above). Again, it is constructed of black anodized aluminum, and measures about 20" square x 6" high. The design keeps the height to a minimum by having the frame angle up at the front end, so the arc necessary for the mirror to clear the rocker box is as low as possible. The mirror support system consists of three bars for a 6-point support system, and a 1.5"-wide webbed strap with all the requisite hardware, which should be fine for the sandwich mirror the scope comes with. Because I'm using a less-than-full-thickness solid mirror, I increased it to an 18-point support system and installed a cable sling. [Modifications # 4 & 5]

The altitude bearings fold neatly on top of the mirror box making a compact package. The bearing surfaces are something akin to Ebony Star Formica glued onto the metal bearings. The folding feature means that the alignment of the hinge joint when the altitude arm is extended has to be precise. On one side, I kept getting a bump in the motion at this point. After considering various options, I drilled out the clearance hole slightly to allow a better alignment, which solved the problem [Modification #6].

I encountered another other bump in the altitude motion caused by the mirror box frame hanging up on the Teflon bearing pad. This was easily solved by adding a couple washers between the altitude bearings and the mirror box frame, which eliminated the slop between the sides of the mirror box and those of the rocker box [Modification #7]. It would be helpful if the manufacturer could do this in the pre-assembly stage, and be extra careful about the drilling of the holes used to secure the hinge joint in the bearing arms so the surfaces aligned perfectly with the arms are unfolded, eliminating any bumps in the altitude motion.

The secondary cage is supported by eight poles, shipped separately. They are assembled with hand hardware, and join at the top in a flattened end that has four holes drilled to vary the length for slightly different focal lengths. The manufacturer suggests pairing them up starting with the second to the end hole, which worked perfectly for my f/4.48 mirror. It is easy enough for one person to attach the lower end of each pair of truss poles to the mirror box. One person can also install the secondary cage on top of the truss poles, but a second set of hands is definitely worth asking for if anyone is around to help. One thing I would wish for here is captive hardware. The inside of the hand knob is secured with a wing nut. If the threads on the hand knob were a little longer, a lock nut could be installed to keep the wing nut from being loosened too far and dropping toward the mirror below.

Speaking of mirror protection, one nice feature that can save the mirror during assembly/disassembly is the simple square "Hubble" cardboard cover that fits neatly inside the truss poles and rests securely on the top of the mirror box when you are not observing. It also serves as a dust cover during storage. The shroud is also definitely worth getting, as it installs easily, folds up very compactly, and blocks stray light without getting in the light path. 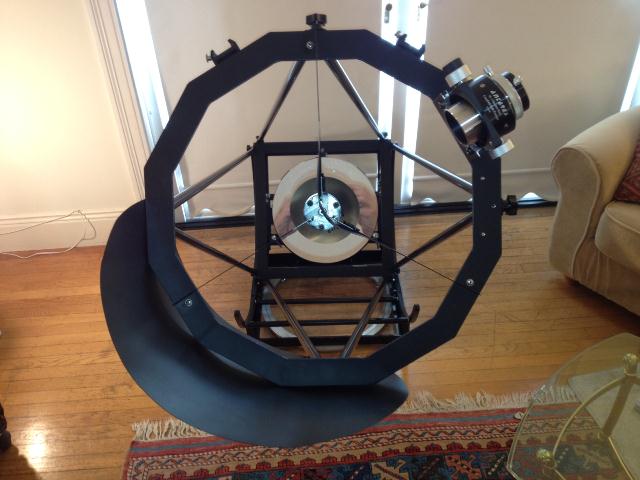 The upper cage, as I call it, is a twelve-sided ring made up of angle iron (actually aluminum), 1.5" in width. The narrowest inside dimension is 17 inches from side to side. The user is responsible for installing the spider vanes, hub, and focuser, as well as gluing the secondary to the hub. (The complete scope comes with a 3" secondary mirror, mounting template and glue.) There are holes drilled for two focuser locations: one even with the side above the altitude bearing, and one at an angle about 30 degrees upward, which is the position I chose. There are also holes drilled for a finder base, which fit the Synta base I use on all my scopes. It was easy for me to drill a couple holes to add a second finder base as well, since I use both a magnified and unit finder [Modification #8].

An obvious problem with the secondary being positioned above the upper cage ring is the need for a light baffle opposite the focuser. While the shroud is very well made and fits perfectly, it leaves the area above the upper cage unshielded from light sources behind the secondary. I solved this with some black plastic I found at the hardware store; something called easy-bagger that is meant to form a garbage can shape when put inside a 30-gallon plastic garbage bag. I cut it into an oval, and secured it using the two truss knobs opposite the focuser [Modification # 9]. In order to have a smaller baffle outside the ring, I cut a small piece that I clipped to the spider vanes with binder clips above the secondary to block light I could see though the focuser coming from above the secondary, which was much more efficient than extending the larger baffle up several inches [Modification #10].

My goal in setting up a scope is to be able to do it without tools. Consequently, I always substitute hand-adjustable collimation screws for the set screws that come in most secondary mirror hubs. This has the added benefit of eliminating use of a hex wrench that could easily slip and scratch the primary mirror. Accordingly, I removed the three set screws from the secondary hub, and replaced them with the longest cap screws I could find (finished in flat black) with a large enough head that I can grab it with my fingers and make the necessary collimation adjustment without the use of small tools [Modification #11]. The primary collimation adjustment knobs have large brass heads, and the "lock" screws are cap screws that can both be adjusted and tightened without tools.

A focuser mounting bracket (included in the price of the structure) has two holes on 2.75" centers on either side of a semi-circular opening for the drawtube. I supplied my own Antares 2-speed focuser, which fit the hole spacing in the bracket, and mounted properly once I rotated the base so the fine-motion knob is on the right side. The manufacturer suggests mounting the focuser supplied with the scope upside-down with the fine-focus knob on the left, apparently because the focuser knobs block the screw holes in the focuser bracket. However, if one simply twists the focuser housing 45 degrees, the mounting holes become accessible, and the supplied focuser can also be mounted right-side up. Incidentally, I had no trouble aligning or squaring the focuser with the secondary holder; as it was spot on.

At this point, I have to say that with all the extra weight I added at the top, including a Paracorr, an 8x50 finder and the light baffle, the scope still balances without the need for any additional ballast. Partly, that is due to my 25-pound primary mirror (same weight as the HO supplied mirror), and partly due to the relatively-large 15" radius of the altitude bearings. This is the first scope I've ever owned that did not have some kind of balance problem.

Now that I have used it a few times under the stars, I'm satisfied with both the motions (as modified) and the sturdiness. The eyepiece image settles down a couple seconds after focusing, and there is very little deflection in the laser collimator spot going from vertical to horizontal. The set-up/break-down goes pretty quickly, and the scope is incredibly compact. The heaviest component is the mirror box, which, with the mirror installed weighs only 43 lbs. That's 12 pounds lighter than the OTA on my 12.5" sonotube Dob! The other components are similarly light. By my unofficial bathroom scale, I weighed the rocker box at 7 lbs., the upper cage assembly at 5 lbs. and the poles at 3 lbs. Despite having a longer focal length than my 12.5" f/4.8 Dob, I can still reach the eyepiece for everything with my feet on the ground (I'm slightly over 6' tall). Best of all, when collapsed, it's attractive (or unobtrusive) enough that my wife will let me store it in the living room under our baby grand piano! 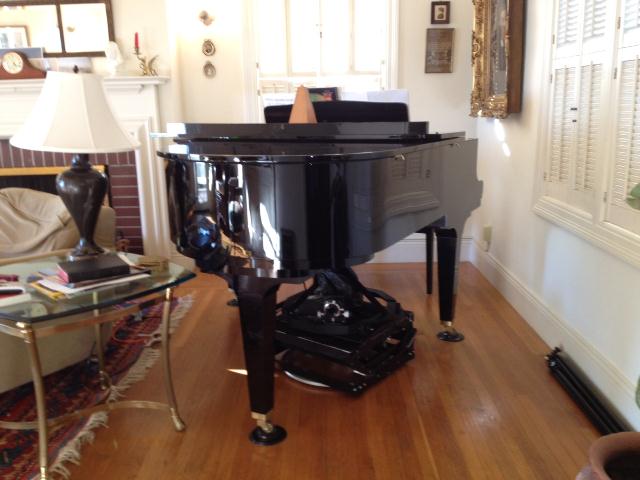