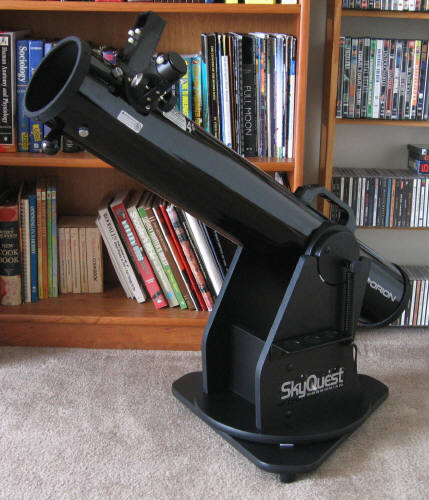 “Show Me the Cosmos!

The XT4.5's Newtonian reflector tube assembly features a big 4.5"(114mm) light-gathering mirror housed in an enameled steel tube. This mirror pulls in 260% more starlight than the lens of a 60mm refractor (the classic beginner telescope), bringing hundreds more objects boldly into view! Think of it: in a given evening you could survey the Moon's myriad craters, then study Jupiter's cloud bands, then star-hop among the Milky Way's diverse star clusters and nebulas. The XT4.5 is one very revealing telescope!”

I’ve been an serious amateur astronomer for the last 6 years, but I’ve had my head in the stars ever since the first time I looked into my mother’s birthday gift over 30 years ago: a Meade Model 285 Refractor that my father paid way too much money for. The telescope came with those cheesy eyepieces that had plastic lenses instead of glass, and as a result, when I’d put the 9mm eyepiece into the focuser for a high power view of the moon, it looked as though the moon had a severe case of chicken-pox. But, that was enough to capture my imagination and my heart, and yet, it took another 30 years before I would finally begin to pursue the sights that amazed me as a teenager.

After my telescope arrived, I began to unpack all the parts and was very pleased to see that Orion packaged everything extremely well, and even thought the exterior boxes had some bruising and scars, all of the contents were completely protected and in perfect condition. Assembly of my “baby dob” took less than 15 minutes and all the parts mated together just as they were supposed to. On my XT8 dob, I used Magic Sliders to increase the smoothness in the azimuth movements, so naturally, I did the same with my XT4.5 and now, the motion is as smooth as glass. The final modification I made to my telescope was to remove the finder scope base from the OTA and replace it with a Rigel Reflex Finder base. Doing this allows me to use my Rigel Finder (no magnification and a blinking bulls-eye) rather than trying to use the supplied finder scope, which I’ve never really been able to get use to. Using the collimation cap supplied by Orion with the telescope, I was able to align the primary mirror in just 3 minutes and now, I was ready to take my new telescope out for a spin around the universe.

I placed the scope out on my back porch, and because the mirror is only 4.5 inches in diameter and quite a bit thinner than the mirror on my XT8, temperature equalization occurred in less than 30 minutes. Even though I have my own eyepieces that I prefer to use when I stargaze, I placed the 25mm and 10mm Sirius eyepieces into the focuser to check out their quality. To me, they don’t seem to give the same depth of contrast as my TV plossls or my Meade 4000s, but for a first-time owner of a telescope, they should provide more than satisfactory views of whatever they decide to point the telescope at. Now this may be a problem associated with having “older” eyes, but the eye relief on the 10mm was pretty uncomfortable, yet again, views were satisfactory for an economy plossl.

My first order of business was to star-collimate the primary mirror, because I noticed the stars were flaring a tiny bit when I was testing the Orion-supplied eyepieces. I placed my Meade 13.8mm SWA into the focuser and with a few little turns of the collimation screws, I was ready to go. My first target was Saturn, and I have to say that I was genuinely impressed with how bright and crisp the view of the planet was. The Cassini Division looked as though it had been drawn using a fine-tipped drafting pencil and striations in Saturn’s cloud tops were clearly visible. Additionally, the mirror on this telescope appears to produce images with greater contrast, and because of the extra contrast, I was able to easily see four of Saturn’s moons. Just for grins, I wanted to see how far I could push this telescope before images began to break down, so I placed my barlowed Meade 8.8 UWA into the focuser, and at a over 200x magnification, the images of Saturn and her moons showed absolutely no degradation. Now, the air was very stable and seeing was excellent, so I’m sure that had a lot to do with it, but even so, this little telescope performed admirably. I also ventured to the Hercules Cluster, Dumbbell Nebula, Alberio, Mizar, and the Ring Nebula, and each time, I was very impressed with this telescope’s clarity and brightness.

If I had to point out a single negative with the XT4.5, I would have to say that it’s the height of the telescope. When pointed at the zenith, the eyepiece is only about 35 inches off the ground, versus the XT6 and XT8, which are approximately 48 inches off the ground. If this is a problem, you could raise the telescope onto a small table or wooden platform, but I chose to go to a local retail store and buy a $4 folding chair, which, when I’m seated, puts me at just about the right height to the eyepiece.

I bought the XT4.5 because for me, it’s not practical to throw my 8-incher into the car and head to a “darker” spot in town for just a couple of hours of viewing, yet I like the ease of use that a dob telescope offers. My new “baby dob” has become my “grab-n-go” telescope for all those last-minute, impromptu observing sessions when I can’t drive the hour and a half to get to the club’s dark site. The XT4.5 only weighs 17 lbs., can be transported as a single unit, and for sheer ease of use and convenience, this telescope would be very hard to beat. At $240, it’s a great bang for the buck, and it absolutely beats the heck out of a thirty year old refractor with cheesy eyepieces. Clear skies!
Comments (0)