Wild Card 006 "They're Big & Ugly - Can You Learn to Love Unobstructed Reflectors?" 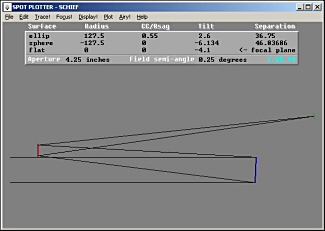 Years ago, I remember seeing an ad in Sky & Telescope for a “Precision Star & Planet Finder”. (It was placed by a company that shall remain nameless, and which produced good products then, and does so to this day. The copywriter just got a little “out of lock” on this one.) This thing was an equatorial mount with huge setting circles made out of stamped sheet steel. There was a piece of very thin-wall steel tubing attached to the declination circle through which the user would peer to see the star or planet he/she had found. The ad claimed that this was a “precision 1-power optical system”, or words to that effect. Of course, the only optics in the whole system was the user’s eye!

In a highly technical sense, it was, of course, an unobstructed optical system, as well. But, we usually expect a little more than 1-power from the ones we use. This column will survey unobstructed optical systems, and it’s follow-up column, “Wild Card 006.1”, will present a design I don’t have time to build, but which I’d like to see built, so I’m giving away the blanks needed to do it! There’ll be a contest, even!

As you might imagine from the name, the Herschellian Telescope was invented by Sir William Herschel. Sir William just tilted the primary mirror of his reflecting telescope just enough so that the focus was outside the beam of light coming into the telescope. It is said that Herschel did that to avoid the loss of light caused by the shading of the diagonal. It’s unlikely that he even considered the loss of contrast caused by the obstruction in a Newtonian. The reason is that the Herschelian Telescope suffers from the off-axis aberrations coma and astigmatism, which really dominate this design. Problems with the diffraction pattern are “down in the noise”

Since I’ve allowed aberrations to get loose into this discussion, I better define how big we can allow aberrations to be in order for an unobstructed telescope to perform well. The standard that most folks set for such telescopes is one originally proposed by the great French astronomer Andre Danjon and the great French optician Andre Couder. The “Danjon-Couder-Condition is satisfied when the aberrations of the star image are as follows:

You might be asking why we’d need to think about off-axis aberrations. The answer is that many unobstructed reflectors are derived from much larger telescopes. They’re what you’d get if you built a huge telescope and then put an off-axis stop in the aperture. A simple example is the 7.5” stop I occasionally use with my 20” Newtonian. When I do that, I’ve created an unobstructed telescope. I could just as easily make a primary mirror 7.5” in aperture and figure the mirror as an off axis section of a paraboloid and have an excellent unobstructed planetary telescope.

There are several firms who sell such telescopes. From what I hear, they’re excellent. Because they require an asymmetrical curve, these telescopes are not trivial to figure, and that leads to their being expensive. And, because such telescopes are off-axis sections of large, fast, Newtonians, they require high-end premium eyepieces to work their best. (So, don’t be fooled by a large f/ratio and try to use a Kellner or cheap Plossl with this type telescope.)

There are also unobstructed reflector telescopes that are derived from Cassegrains. The various Schiefspiegler telescopes designed by the late, great German amateur Anton Kutter are of this type. They’re what you’d get if you made a very large, relatively slow Cassegrain and placed an aperture stop in such a way that the secondary mirror didn’t intrude into it. In the case of all of Kutter’s designs, his secondary element only magnified the focal length of the primary mirror between 1.5- and 2-times. The one I’ve shown also has the advantage that the elements are both of the same radius. See the diagram of Kutter’s most popular Schiefspiegler.

Here’s the CATCH: If you re-read what I wrote above, you’ll note that I said that many unobstructed reflectors are DERIVED from much larger telescopes. That means that they’re not usually identical to a stopped-down version of that larger telescope. In fact, most unobstructed reflectors feature spherical mirrors. The reason for this is that figuring off-axis sections of a large aspheric mirror is, to say the least, a non-trivial exercise.

The trick in using all-spherical optics is to choose combinations of mirrors that, over the small section chosen, are so close to the reference aspheric mirror that the difference is minimal. Such a telescope will present an image that is a mish-mash of spherical, coma and astigmatism. The key thing to remember, though, is the Couder-Danjon Condition. If the “mish-mash” of aberrations results in an aberration spot that is small enough to meet the C-DC, then we won’t see the aberrations. They’ll be smaller than the Airy Disk.

In later years, Dick Buchroeder designed a very successful three-mirror unobstructed reflector called the Tri-Schiefspiegler. I’ve looked through a well-made 8” version of Dick’s design, and it leaves nothing to be desired except being compact, which none of these telescopes is. Any of them might have been a Tyrannosaurus in a previous life! See the a diagram of the typical Buchroeder Tri-Schief: 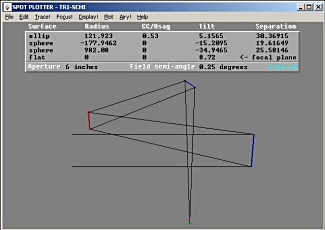 If you take a look at spot diagrams of either the Kutter or the Buchroeder designs, you’ll notice that the spots are a bit bigger than half the diameter of the Airy Disk. Yet these telescopes perform admirably. That suggests to me that satisfying the Couder-Danjon Condition is certainly desireable, but it’s not a hard and fast requirement.

I would be remiss if I didn’t mention that the late Art Leonard of Davis, CA, invented several innovative Schiefspiegler telescopes that featured mirrors that were mechanically warped in order to achieve a sharp image. Also, the well-known designer Jose Sasian, of Naperville, IL, has designed several innovative unobstructed telescopes.

A number of years ago, I designed a folded-Herschelian that was to be featured in a construction article for “Astronomy” magazine. It was going to be a 4.25” (11-cm) f/45, but, since it would be folded in half, it would “only” be 8-feet long! It was to be mounted on a version of Richard Berry’s “DobFractor” altazimuth mount.

What happened to that telescope? I suppose the good line would be that the “Astro-11”, as I called it, got a good offer to star as the Tyrannosaurus in a sequel to “Jurassic Park”. But, the truth is that the editor who was championing the project left the magazine in the middle of the process, and, by the time a new editor was in place, there was no interest in the project, and it was never made. (But I have the primary mirror that my friend Howard Moore made for it, and I intend to resurrect the thing in the near future.)

In case you haven't noticed, there aren't any unobstructed reflectors that provide a wide field. That's always going to be the province of apochromats. In fact, it's not particularly easy to obtain an unobstructed reflector that has anything but a fairly narrow field. But that field will be well corrected and feature very high contrast. And, a long-focal-length eyepiece can achieve high power, which means that even someone wearing eyeglasses will have no trouble. So, maybe an unobstructed telescope is for you.

If this column has piqued your interest, you might want to go a little deeper into the world of the unobstructed telescope. Have I gotta deal for you! There’s a marvelous free program that you can use to lay out and test on- and off-axis reflectors. It’s called “WinSpot”, and it was written by David Stevick of Wheeling, WV. I used it to create the illustrations for this column, and you’ll see its output in future columns. WinSpot has many more examples of unobstructed telescopes than I've presented here.

David Stevick is an aficionado of unusual reflector telescopes. He seems to find them, and they seem to find him. One telescope that he “found” is the Stevick-Paul Telescope. Why it has his name on it is an interesting story, but the telescope’s performance is even more interesting. That’s the subject of next week’s column. And, there’s a CONTEST with real PRIZES rolled into it!

A LITTLE MISCELLANY: I posted a satellite topo-map of the State of Arizona earlier this week on one of the forums. Several folks asked where the map originated. I don’t know, but it had to have been derived from the NOAA map of the entire World that’s available free. Just google on “NGDC get GLOBE”. The first entry is the one you want. From there, just follow the instructions. You’ll probably want to take a look at the 16 panels that are available for download. You’ll also want to have a nice, fast connection!

RICK SHAFFER is an astronomer, writer, teacher, and designer-builder of telescopes and museum exhibits. He lives and works in Sedona, AZ, near the interred bones of the dinosaur he was 293-lives ago….