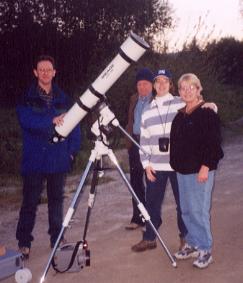 [ARTICLEIMGR="2"]Just a quick review of this scope for the sole reason that I couldn't find one myself when considering buying it!

I spent the last year with the Orion 100mm EQ F/6 and wanted to move to the LXD75 for several reasons:

1. Driven
2. Supersize Me! (A Big Refractor relative to the Orion)
3. GOTO
4. Lunar Planetary Imager (An intro to Astro-Photography)

The Big Dobo craze just doesn't grab me. The main reason is I find it very hard to point these scopes accurately, and as for star hopping - eh? I find it a challenge just to move the target back to the centre. Perhaps if I had some upside down reverse image glasses on :-)

The 6" is a behemoth and I live in a condo with hallways and stairs (arms tired enough yet?), and a parking lot to negotiate ...

When the 5" arrived and opened the box I knew I had the right scope.

It looked very impressive. It weighs 15lbs, which is right on the high side of my comfort level. This also puts it well on the comfort side of the LXD75 mount which is built to ahem, 'withstand' (I think that describes the situation) the 28lb 6" scope!

Everything was delivered in good order, no missing parts, everything worked.

I assembled the scope, tripod and mount in about an hour - taking my time. I initialised the autostar and faked a polar alignment all without any problem. I had previously ordered the Orion Dynamo - 7 amp hour version and this provides ample power without adding to the transport weight burden.

Our first night out with the new scope I slewed over to Jupiter just using the Arrow keys (without a star alignment).

I could immediately see a big difference in the detail presented by Jupiter when compared with the Orion 100mm. The cloud belts didn't look smooth anymore, more like (as Stephen Hawking might have put it had he been a Vet instead of a Theoretical Physicist) 'Cats Fur' ...

I had also pre-purchased an Orion 7.5mm Epic ED eyepiece. I figured I needed at least one 'Good' eyepiece for use on the new scope. I plugged this into the scope and at 155x, the view was impressive. I immediately could see a moon emerging from behind Jupiter. Other club members then had a look at this and about 10 mins later it was gone. We were slightly baffled at this until we referenced the scenario and found Io had emerged from conjunction and then been eclipsed by Jupiter's shadow! Pretty exciting stuff for our first night with the new scope ...

Then I did a 2 star alignment - which is very simple and slewed to M3, then M5. The scope was pointing pretty close to these but they were still just outside the main field of view of my 25mm eyepiece. I then did a 3 star alignment and that made a big difference. Pointing was then dead on! I always use 3 star alignment now.

Our first session was great on the planets, but not too impressive on the Deep Sky. But next time out, I learned what a difference an observing site makes. This time we were not looking over glare. The seeing was poor on the planets so I used the GOTO to point to some globs, galaxies, and nebulae. I was amazed at how good the Ring (M57), M81/M82, The Dumbbell (M27) all looked through the scope ... I had seen the ring through an 8" reflector on the firs night and thought - well don't bother with that, its barely seeable. But at the new site, it looked amazing ....

So much for a quick review ...

Summary: The Scope Hit All The Targets I Had For It.

We imaged Jupiter's moons on the first night out and imaged some actual detail on the second try! So the LPI is as easy to use as they advertise and it’s fueled our desire to learn more. So I have to say we've only had three nights out with the scope so far and that’s a very short time to find its limits. But I also have to say, the capabilities and performance so far are superb!

If you are a stickler for super fine engineering then you will not be happy with for instance the focuser. It could be a lot smoother, but I took it apart and it’s pretty easy to fiddle with to achieve smoother operation.

Overall this is amazing value for $799 U.S. I would rate the scope at 10 out of 10 on value and performance at its price point.