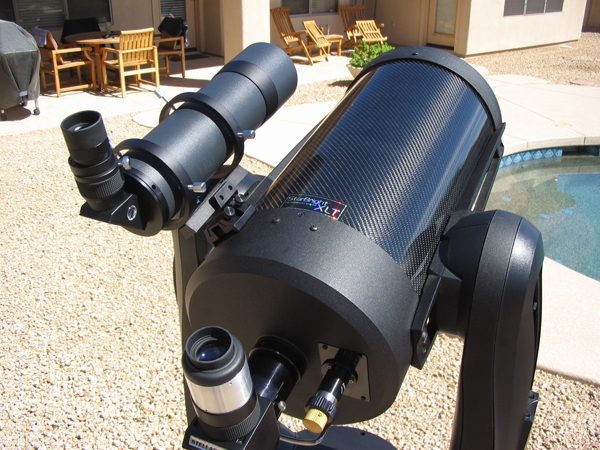 Can a well-engineered and executed 80mm finderscope serve multiple duty as a finder, RFT (Rich Field Telescope), and grab-and-go scope? In short, the answer is: yes, yes, and yes.

Please note: I am not associated with Stellarvue other than as a satisfied customer; 2 finders are now “under the belt” as well as their high quality 2” dielectric diagonal.

The search for a 80mm finderscope was an easy process following my extensive original search for the 50mm finder it replaced. I had purchased the Stellarvue F50 finder, affectionately known as the “Sparrow Hawk,” and had such a good experience using it that staying with Stellarvue was an easy decision for me.

Upgrading to a 80mm finder was initially based on the premise that it could be used as both a finder and RFT. At 2.5 times greater light grasp in contrast to the 50mm finder (140X that of the human eye), the larger aperture should provide a significantly more fulfilling experience when gazing rich star fields and viewing large DSOs. The F80 limiting stellar magnitude is about 11.3.

I ordered the F80M (“M” = matte finish, black) and Stellarvue’s quick-release SCT mounting system (model R80S) from Oceanside Photo and Telescope (OPT) and both were received fine in short order. In contrast to the older F50 packaging that was marginally adequate and underwhelming from my perspective, the F80 packaging is significantly of better design – connoting that a product of high quality was contained within.

Upon opening the box, I immediately focused my attention to the F80’s objective cap. If there is one failing of the Stellarvue 50mm finder, it is the inadequately sized objective cap that stayed in place by will power and not because of sufficient surface contact area. My concern quickly disappeared – the objective cap will stay on the F80! Sometimes it is the small things that make us real happy. My attention then turned to the fit and finish, and the F80 is a very nice finder scope indeed. The glass was pristine, and the quality-of-build was clearly evident.

Understandably, the finder’s quick-release assembly is not supplied with mounting screws and one must be careful to choose the correct length mounting screw. On an SCT, be sure to move the mirror all the way to the back of the scope and insert a non-threatening object, such as a wooden toothpick, very gently into one of the mounting holes to determine the clearance between the inside of the scope tube and the mirror. Diligence to select the correct length screw will be rewarded.

Initially the end of the steel quick-release screws slightly gouged the dovetail assembly holding the finder’s OTA rings. I used a fine file to ease the rough ends slightly and no further gouging was experienced. The repeatability of the QR mount is good and the 6 nylon-tipped steel alignment screws securely press against the matte finish without marring the tube - more about this later.

At about 2.5 lbs., the F80 is heavier than the F50 it replaced and I hoped I would not have to counterbalance my Celestron NexStar 9.25” telescope. This scope model is designed to be rear-heavy, and when the finder was mounted, no balance issues were realized and the go-to accuracy remains spot-on. I suspect the more forward positioning of the longer OTA and larger objective assembly compensates for the increased overall weight – balance-wise.

In contrast to the reticle on the F50 finder, the supplied 23mm eyepiece on the F80 provides a separate reticle adjustment to bring the crosshairs into focus. The eyepiece set screw is metal, and for those of you looking to replace it with a non-marring nylon thumbscrew the size is M4x0.7 pitch.

The supplied eyepiece also supports Stellarvue’s optional Rigel Pulse Guide Illuminator. Should one not opt for the illuminator, there is a flexible plastic/rubber piece that ships with the finder to protect the threads and keep ambient light out of the eyepiece. This plug reminds me of the F50 objective lens cap – it’s there, but not to be trusted. The plug actually fell out of the eyepiece assembly in an Ace Hardware store when I looked for something better to use. Alas, a rubber license plate bumper found in the “parts bins” (part # RBA-XM) fills the bill beautifully at around $1. It is smaller than the stock plug, is less obtrusive, stays put until removed, and it looks “stock.” The plug can be seen in the size comparison photo shown below.

The helical focuser affords exceptionally fine adjustment and all of my 1.25” eyepieces ranging from 5mm to 40mm of various designs come to focus. And, the ability to rotate the back end assembly (diagonal/focuser, & eyepiece) is a nice feature for use during public star parties. Sometimes even a step stool isn’t high enough to allow youngsters to view large asterisms such as the Coathanger when positioned lower in the sky. Simply rotate the back assembly and the eyepiece becomes immediately more accessible.

There is a significant size difference between the F50 and F80 units. I view the F80 as an F50 on HGH (Human Growth Hormone). Installed on the scope it certainly looks more like a RFT than a finderscope and garners a lot of attention (see size comparison photo).

Over time I realized the mounting and alignment screws provided were temperature sensitive and the finder’s alignment could change and attachment to be base plate could loosen. The remedy was easy; simply replace the screws with those made completely of nylon. The replacement alignment screws are 5mm-.8 x 20mm and the base screws are 4MM-.7 x 20mm. I sourced the screws from Jim Henson at Scope Stuff (scopestuff-dot-com), a great organization to do business with.

How functional is the F80? As a finder, the F80 performs beautifully. As an RTF when mounted on the telescope, it delivers views well beyond the capability of the F50. I also purchased a separate base (this unit was supplied with nylon-tipped screws) and have it mounted on a tripod. This allows the F80 to effectively be used as a grab-and-go scope and I even temporarily mount a red dot finder on it to greatly enhance the ability to locate specific targets. For fans of Sky & Telescope’s Pocket Sky Atlas, the F80’s 3.8° FOV nearly matches a 4° Telrad overlay ring – a very handy coincidence.

I also crafted a solar filter using Baader film and use the F80 as a solar finder for my solar filter protected telescope. Finding the Sun is now child’s play.

How does the F80 perform? When grab-and-go mounted, from the back of the La Posada Hotel (near town center) in Winslow, AZ, on Route 66 (Eagles song fame), NGC 253 and 288 resolved beautifully and fit into the same FOV. As a solar scope this past January, I viewed remnants of the believed-to-be decaying, once-giant sunspot 978 – deemed to be visually “not very impressive” on the eastern limb at the time. Cool!

In early November, Jupiter’s Io & Ganymede moons were visually sub-minute apart, and were clearly separated as distinct pinpoints of light viewed through the finder’s supplied eyepiece. When mounted as a finder, the Veil Nebula was a most impressive sight when a 2” UHC filter was held to the eyepiece. I thought the supplied eyepiece was threaded for 1.25” filters, but discovered upon close examination that the “threads” were reflection-eating mini baffles. Not an issue because most 1.25” oculars incorporate filter threads – simply insert an appropriate focal length eyepiece into the finder and filters can be conveniently used.

Bottom line: The F80 delivers as expected and I am very pleased with its performance. The modifications I have made are my choice, and are not necessary. The finder’s specifications can be found on the Stellarvue Website at: stellarvue-dot-com/f80.html. 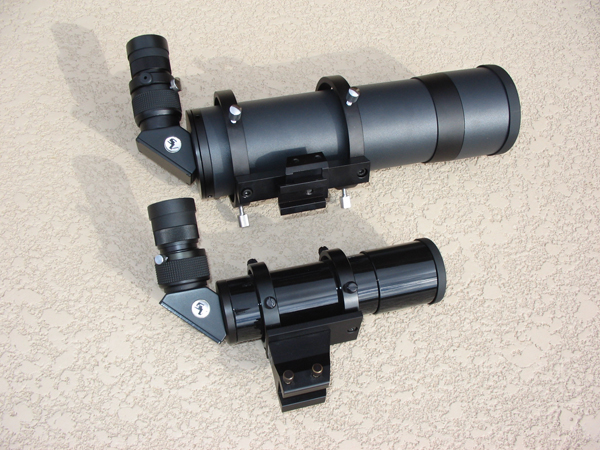