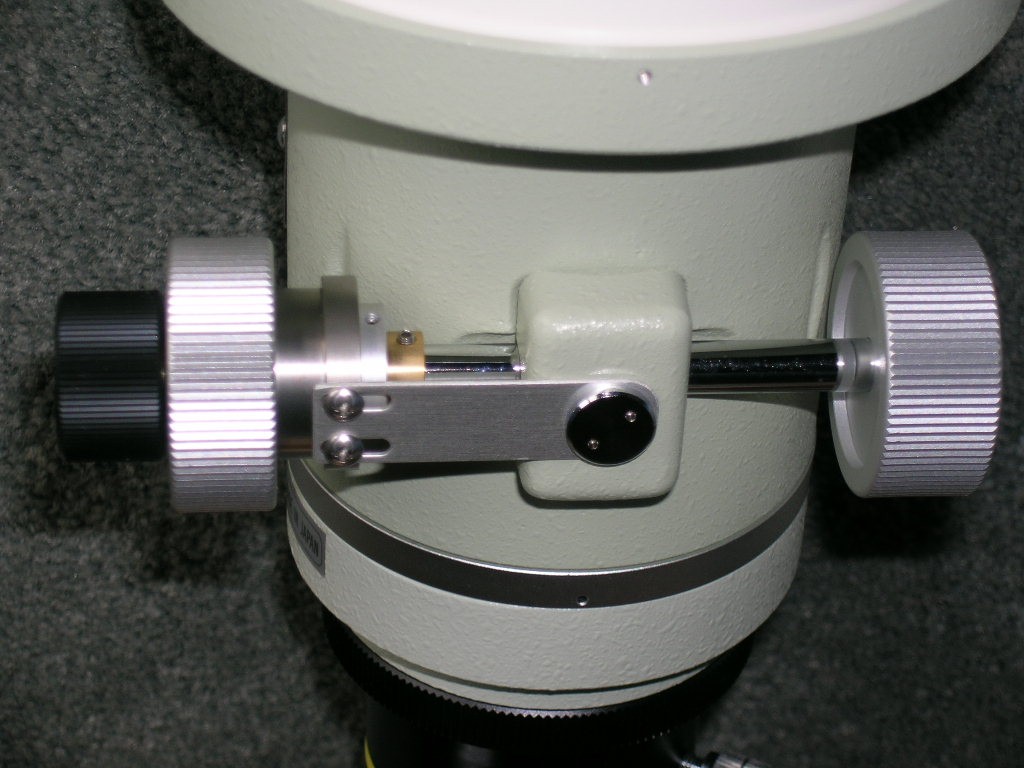 As an owner of a TSA-102, it was exciting news when Takahashi announced the second refractor in the “triplet super apochromatic” series would be a 120mm scope. The TSA-102 has superb optics and produces high resolution images. The question was, will an increase of 18mm in aperture make a significant difference and be worth the cost? The new TSA-120 was introduced in the U.S. at a price of $3,795 compared to the price of the TSA-102 at $2,695. This equates to $1,100 for the additional 0.71 inch of aperture that gives a 38% increase in light grasp. However, Takahashi has included a new accessory with the TSA-120. It is the Micro Edge Focuser 3, or MEF-3 with a 7:1 ratio for fine focusing. This is an essential accessory for Takahashi scopes that have a critical focus that is like the tip of a well sharpened pencil. One can mentally adjust the price of the TSA-120 to take this new accessory into account. Like the TSA-102 package, Takahashi included Brian Feldman’s quick release bracket for a finder scope. This BT Technologies QRB has gained almost universal acceptance among Tak scope owners and is another essential accessory if you store your scope in a case, either hard or soft.

The MEF-3 does have a different feel, one that has been described as “click-stops.” Those who find it annoying have the option of installing Starlight Instrument’s Feather-touch 10:1 focuser, albeit at considerable additional cost.

When you order a new Takahashi through your favorite dealer, they routinely contact Texas Nautical Repair in Houston and make arrangements for delivery. This is noteworthy because Takahashi has a policy of shipping by “second day air” as a condition of their five year warranty. This cost varies depending on how far you live from Houston, TX . The scope is shipped in Takahashi’s traditional triple boxes which provide adequate protection from puncture and short drops. This packaging has become more important because the new lens cell for the triplets is not readily removed nor can the lens be easily collimated since the alignment screws have been deleted from the design. TSA scopes that require collimation need to be returned to TNR.

The TSA triplet lenses are air-spaced and utilize S-FPL53 extra low dispersion (ED) glass in the core lens. The ED glass likely comes from Ohara in Japan. This triplet lens is heavy. When you lift the scope, you immediately notice the front end being heavier than the FS series. When the scope is mounted, it must be moved back further than the fluorite doublets to achieve balance. The air-spaced lens has introduced another consideration for owners when they clean the objective. Fred Garcia of TNR has added to the instruction packet his notes on cleaning these lenses. It is very important that any cleaning solution or water not be allowed to seep under the rim of the lens cell. It is possible for the solution or water to be drawn between the glass lenses by capillary action. As Fred notes, this requires shipment back to Japan for repair. I have not read or heard a similar caution for the air-spaced Christen triplets. Oil-spaced triplets may not be vulnerable to this damage, but the caution is important to note. Another consequence of the mass of the glass in the objective is the increase in time required for thermal equilibration compared to the fluorite doublets. I typically allow 30 to 60 minutes depending on the temperature difference between indoors and outdoors or the rate of change in temperature outdoors. 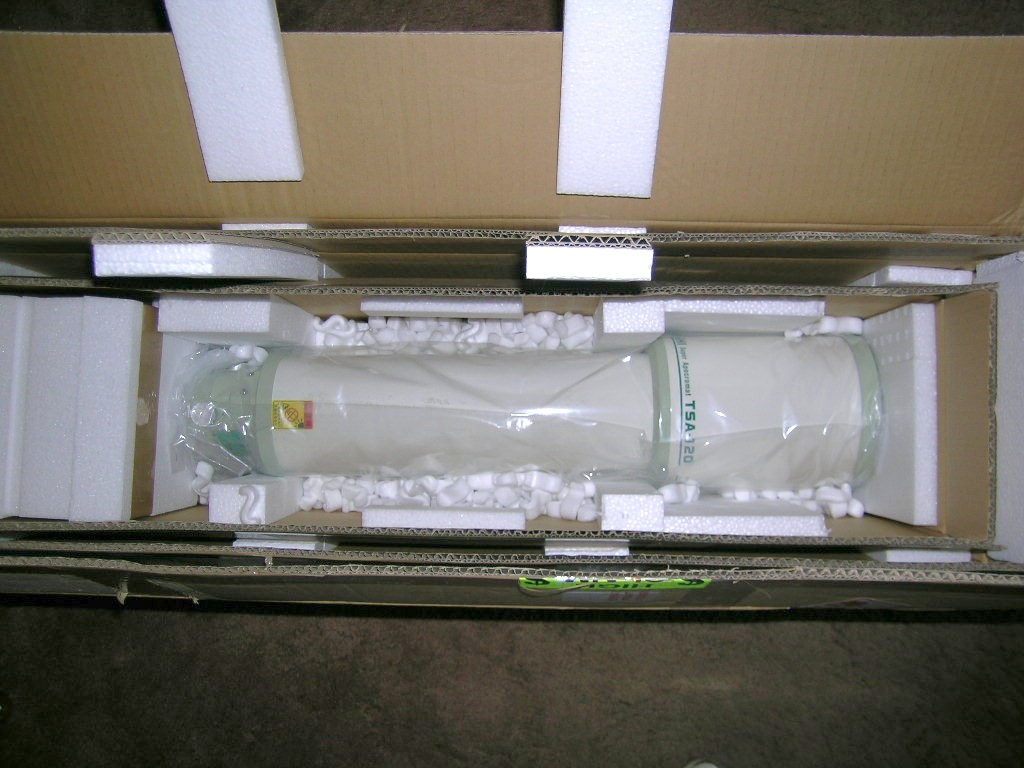 One of the improvements of the new TSA design is better color correction. Even though the Takahashi fluorite doublets provide excellent images, some have complained about residual color on very bright objects such as the limb of a crescent moon, Venus, and Vega. This has been removed with the new lens design. Takahashi advertises this design as also being much improved for CCD photography. I cannot comment on this, but certainly there is no observable color on the aforementioned bright objects. In my research on the TSA design, I found color curves and spot diagrams that compare the triplet lenses with the fluorite doublets (http://www.takahashi-europe.com/en/TSA-102.optics.php). Both measurements indicate improvements in the new design. Note that the TSA lens gives much tighter spots towards the blue end of the spectrum while the FS lens has tighter spots at the red end of the spectrum. This pattern and size of spots would imply that one might want to star test the TSA on a blue star (e.g., Vega) and the FS on a red star (e.g., Arcturus, Betelgeuse) for best results. Some people have commented that Takahashi is moving away from fluorite doublets (the FS series) because of the difficulty of working with fluorite crystals and the cost of their manufacture. This may be true, but the move also comes with improvements in the optical performance of their telescopes. It is interesting that the element fluorine still finds its way into ED optical glass, only 20 to 30% is in the form of calcium fluorite (CaF2), other forms are fluorides of aluminum, strontium, barium and yttrium (http://www.oharacorp.com/pdf/msds-s-fpl53.pdf). This can be seen by reading the material safety data sheet for S-FPL53 glass (the MSD is made available in the workplace where this glass is ground and polished). 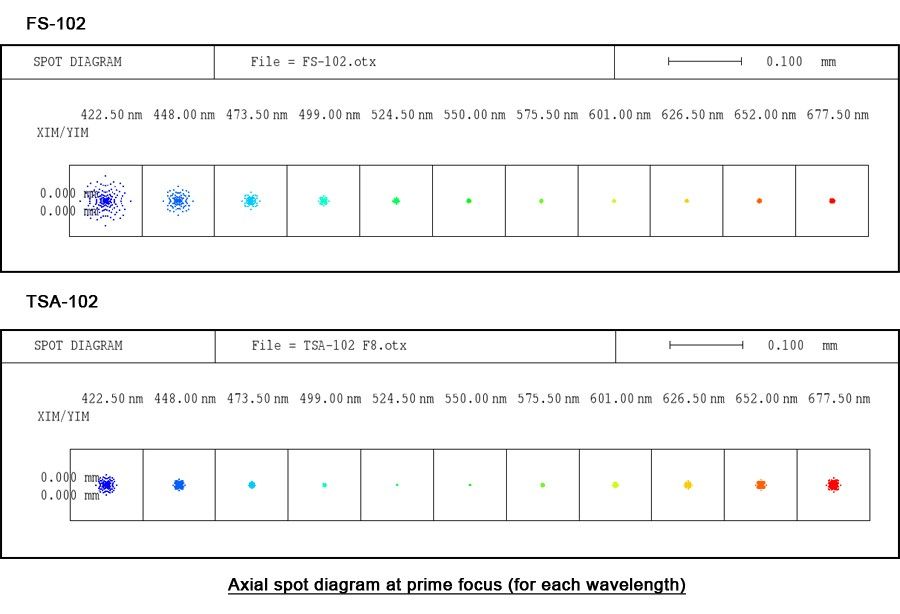 One of the advantages of the TSA-120 is that it is relatively short compared to the FS-128 and not much larger than the TSA-102. In the photo of the three telescopes, the largest is the FS-128 and smallest is the FS-102NSV (almost identical in size to the TSA-102). The TSA-120 will fit in the Tenba case designed for the FS-102 (with the non-retractable, fixed dewshield). Clearly, the sliding dewshield contributes most to the shorter length, but Takahashi also shortened the focal ratio from f/8 to f/7.5 for the TSA-120 compared to the TSA-102. Nonetheless, when the TSA-120 is ready for viewing, that is with the dewshield extended and a 2 inch star diagonal installed, it is a fairly long scope. On smaller mounts, like the Great Polaris (GP) and even the Great Polaris Deluxe (GPD), the increase in length of the 120 over the 102 contributes to increase in torque on the mount head. At 5.7 kg (12.6 lbs), the TSA-120 is within the weight limit for either mount, 15 and 22 lbs, respectively. The GPD is probably the more desirable sized mount and should have very sturdy legs to minimize vibration. 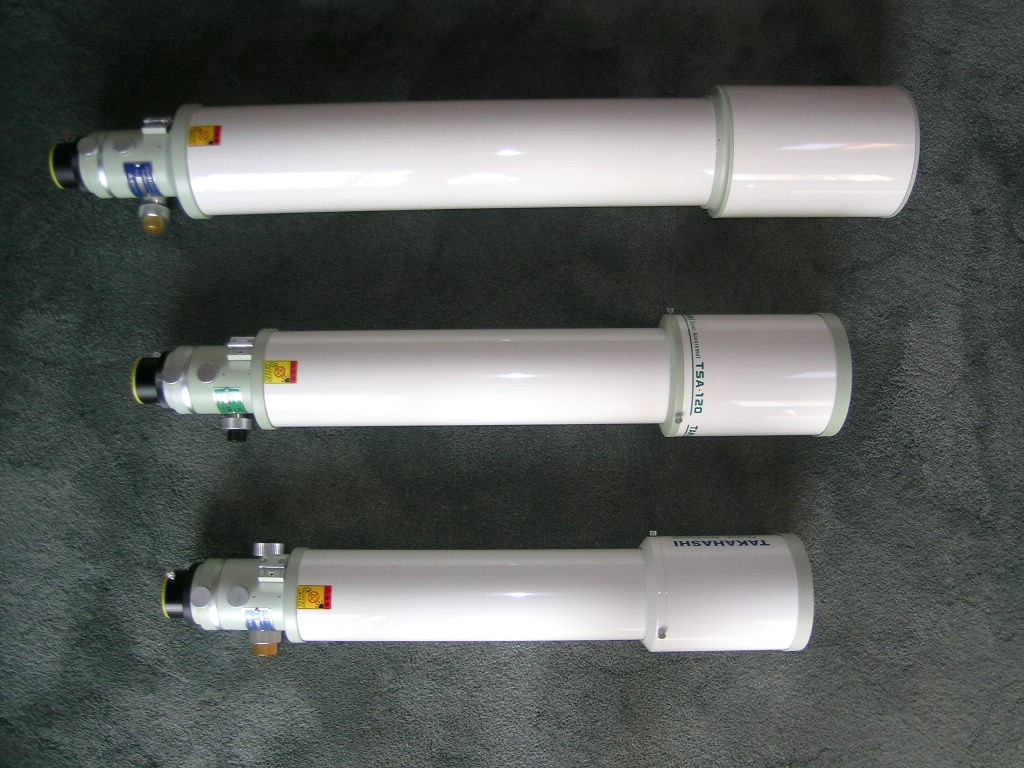 When my new scope arrived, it was one of those marginal nights when moisture in the air prevented a full night of viewing. Valley fog is common during the winter in Davis. Our club’s dark sky location is snowed-in during the winter, so my options for viewing were limited. Nonetheless, a backyard look at Capella with a 5mm Nagler showed a nice compact Airy disk with a very fine ring close to the disk. While not the brightest star, there was no detectable color. The diffraction ring on the inside of focus was “textbook” (i.e., Harold Suiter’s book on “Star Testing Astronomical Telescopes”). The image on the outside of focus was not as sharp, but my “floaters” were interfering with making a good assessment. Jupiter was up, but is low in the sky this time of year; nevertheless, the image was excellent. The belts were distinct and showed some detail on their edges. The great “red” spot was not in view. Jupiter’s moons were small compact spheres. The Double Cluster through a 24mm Panoptic was beautiful, one of my favorite views. I particularly enjoy trying to see the faintest stars possible in this object. Likewise, the Pleiades were beautiful, but because of the high moisture content of the air, I could not see any nebulosity. By the time I wanted to view M-42 in Orion, my scope and mount were wet from dew and I decided to bring my new toy indoors. I will add a more comprehensive observing report to this review when the weather and sky conditions allow. This review was truly written on a cloudy (foggy) night!


For those who especially enjoy planetary viewing, Takahashi has designed an “extender” for the 120. The new extender is the ED1.5X, which increases the focal length to 1,350mm. The Extender Q at 1.6X has been used with fluorite doublets and the Petzval design, e.g., the Sky-90 and FSQ-106 to reduce residual color. While not considered a barlow by Takahashi, it does indeed improve planetary images. I look forward to trying the new ED1.5X.

At this point, I am pleased with the TSA-120. It has met my expectations for quality and I suspect it will do the same for performance. I believe Takahashi has another winner in its stable of fine astronomical instruments.