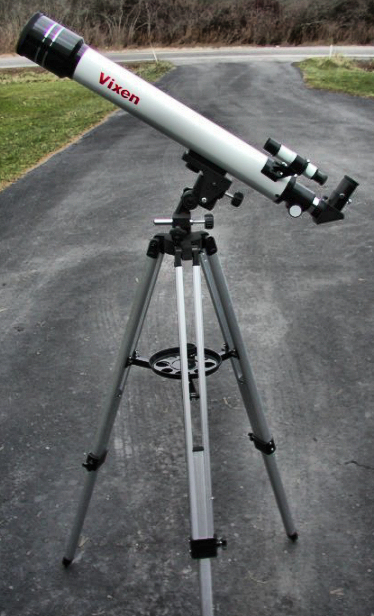 A beginner’s scope that won’t disappoint?


As a confirmed telescope addict, I’m often asked to recommend an inexpensive “starter” telescope for a child or novice on a budget. At some of the public outreach events of the Buffalo Astronomical Association, I’ve groped with the difficulties of pointing the way to something that won’t instantly kill a budding interest in astronomy.
Many decades ago, my own beginnings in amateur astronomy were almost terminated by a long-focus 32mm refractor on a ball-joint mount that oscillated wildly with the slightest touch. Fortunately, a wonderful Unitron 60 mm saved me and sent me down the path of spending huge chunks of my disposable income on bigger and more capable instruments.

Today, there are myriad choices in low-cost telescopes, most of them imported from mainland China. However, the vast majority of them feature decent optics, rendered almost useless by cheap plastic parts and pathetically engineered mounts. Many of these 60mm refractors and 75mm to 114mm reflectors COULD serve as a viable introduction to observational astronomy, but finding and tracking objects with them is an exercise in frustration.

In trying to get some sense of the bottom of acceptability, I purchased a Vixen Space eye 70M alt-azimuth refractor instead of another unnecessary eyepiece. At a street price of about $140, the Vixen is priced above the “bottom-feeder” varieties, and the consistent reports of solid Vixen quality for most of their instruments offered some measure of hope.


The Space Eye 70 arrived in perfect condition, well packaged in an attractive “gift box” featuring the usual spectacular Keck and Hubble photos that promise a great deal more than the telescope can actually deliver. Form-fitting Styrofoam ensures that components are not subject to shifting and potential damage while the package is in transit.

Assembly of the scope was simple and straightforward, a decent set of instructions making the task quick and efficient. The instrument is an amalgam of metal and plastic, actually quite attractive with its gloss white aluminum tube with a black plastic lens cell, dew cap, and 1.25” rack & pinion focuser. A mounting point with two protruding screws allows attachment of the 5 x 20mm finder with a plastic bracket and set of fastening knobs. The 1.25” 90 degree mirror star diagonal is fashioned of black plastic and is secured in the drawtube by a setscrew. Two generic 1.25” Plossl eyepieces and a plastic dust cap complete the ensemble.

The mount for this Vixen is unusual in that it features slow-motion controls for both altitude and azimuth along with locks for tensioning both axes. The mount is metal, finished in a nice looking black crackle. It sits on an adjustable extruded and very light aluminum tripod that has plenty of height adjustment available for seated or standing observation. A small tray at its center has holes to accommodate a number of eyepieces.

The optical tube attaches to the mount with a captive knob and an additional safety lock.
Not at all a bad set-up.
When fully assembled, the Vixen weighs in at a feathery 6.5 lbs., easily movable by a child, but SO light that a gust of wind or a curious family pet could send it tumbling. The narrow angle of the tripod legs puts the center of gravity in a precarious state, so caution is advised.

The Space eye 70M is a 70mm, f/10 achromat of the classic crown and flint configuration. Two eyepieces are included with the scope: a 20mm Plossl for 35x and a 10mm Plossl yielding 70x – good choices as it turns out, though the 20mm displays a healthy dose of field curvature.
The objective lens was clean, perfectly collimated and coated, presumably with MgF2, as there were reflections visible when the lens was viewed head-on.
But are all 70 millimeters of the objective lens in use? Looking through the scope without an eyepiece, I found that the outer perimeter of the objective lens was not visible. A rough estimate indicated that 65 to 66mm of the lens was actually being used, baffles in the main tube and drawtube cutting a bit into the light cone.

The optical quality, nevertheless, is surprisingly good. Even with the cheap 1.25” mirror star diagonal supplied, the Vixen generated a pretty nice star test, which showed no astigmatism and diffraction-limited correction for spherical aberration. As expected, there is a dose of chromatic aberration, but the false color with an achromat of this aperture and long focal length is not obtrusive at low and medium powers.

On a cold January evening (about 12 degrees F.) with the telescope cooling for 30 minutes in an unheated garage, the test on a variety of commonly observed objects was on.
The nearly full moon was very sharp with excellent contrast and almost no false color at 35x. A thin purple rim manifested itself at 70x, but the image remained sharp. These views would undoubtedly be very pleasing to a novice observer, especially with the orb near first quarter.

Jupiter, high in the southern sky and brilliant, easily displayed its four Galilean satellites at 35x, and when the magnification was doubled, revealed the North and South Equatorial Belts with one tiny northern “barge” and some detail in the southern component. There were hints of dusky polar areas and fainter belts. At 140x, with a 5mm Orion Ultrascopic, the image remained quite sharp, and detail in the belts was better resolved, though the brightness of the Jovian disk became compromised.
(Unfortunately, the telescope shook so badly at this power that exact focus almost impossible to achieve, and tracking was a frustrating chore.)

Double stars were also handled well by the Vixen. Albireo was a lovely sight at 35x as its vivid colors were nicely maintained. Sinking low into the northwestern sky, the classic double-double, Epsilon Lyrae, surprised me with resolution at 70x and a satisfying split with the power bumped up to 140x. Resolving this pair is pushing fairly close to Dawes’ limit for a small scope, but the Vixen’s optics were good enough to get the job done.
Observing Castor at 70x, I found the split to be clean and easy, solid airy discs and a delicate first diffraction ring being just visible. With the power doubled, the view was still relatively sharp, but the stars’ colors took on a yellowish cast instead of the authentic white.
Rigel turned out to be a tougher challenge. The faint companion faded in and out of view at 70x as the seeing varied and created a swollen primary star.

I didn’t expect much for deep-sky performance from this small refractor, but it did serve up a pretty decent image of the Orion Nebula, albeit a faint one with the “bat wings” being just visible and any trace of any color lacking. The Trapezium, however, did show four neatly defined points at 35x.
That same 35 power did a solid job of framing the Pleiades, the stars forming tight pinpoints spread on a dark sky background.

Overall, the optics of the Space eye 70 do their job well – enough to inspire a real interest in observational astronomy in spite of its limited aperture.


If only the mechanical features of the telescope matched the quality of the optics!
While conceptually pretty decent, the mount suffers from the same “shake, rattle and roll” syndrome of almost every low-cost telescope. With both axis locks tightened so the slow-mo knobs engaged, damping time was between 3 and 4 seconds after a sharp rap on the tube. This sounds reasonable, but any attempt to touch the focusing knob created the same effect, making accurate focus difficult to obtain.
The slow motion controls did nudge the scope along with less vibration, but their feel was non-linear, and (especially in altitude) they had dead spots where they provided no motion whatsoever. The knob for tension in altitude had to be adjusted carefully, and frequently, in order to allow acquisition and eventual tracking of objects.
As problematic as this seems, it is still better than the frustration generated by cheap “mini-fork” mounts found on the majority of inexpensive refractors.

The R&P focuser is another sore spot. Though its motion was fairly smooth, it drooped a few millimeters with the unit racked out to normal focusing depth. I removed it, tried to shim it with thin plastic, felt, and a variety of other materials – but without success. In actual use, this turned out to be a minor annoyance, but with its wobble, the focuser won’t be mistaken for a decent Crayford.

The 5x20 finder, small by any standard, displayed mediocre optical quality, but it did sport a crosshair reticle and a helical focuser for its eyepiece. The problem occurred in trying to align the finder with the main telescope: the three-screw arrangement with a plastic sleeve to anchor the front end of the finder bracket made for a lengthy period of fiddling. I finally gave up for “close enough” in the upper left quadrant.


If it seems that I’ve been overly critical of the Space eye 70, I may have unwittingly removed the scope from the context of its very reasonable cost. This is obviously an instrument built to a strict price point, and its shortcomings can be forgiven if the prospective buyer can live with a less-than-optimum mount, focuser, and finder.

Yet, the scope has very good optics and offers a lot of desirable standard features not found in the competition. It could serve as a decent starter scope for a child, but might not satisfy a novice teen or adult who would benefit from more aperture and stability.

Overall, this little Vixen is surprisingly competent for its price, and it’s a whole lot better than my first little refractor of years ago. So, with reservations in mind, it’s not a bad choice.