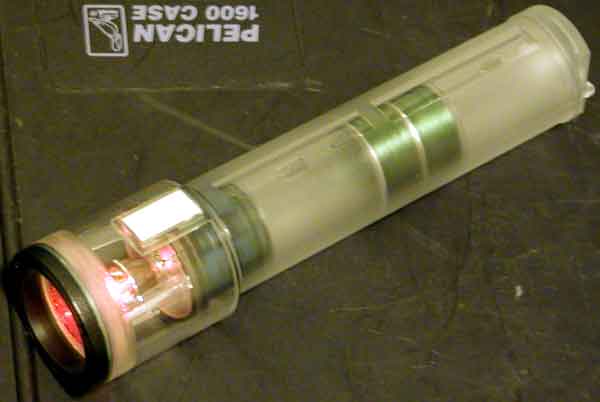 I’m a gadget nut. If something hi-tech comes out, I’m right on it. Like most people in this hobby, I’m always on the lookout for items that can be used to make my astro life easier.


When the Faraday Principle, shake-to-charge flashlights came out, I bought a few immediately. For those who are not familiar with these flashlights, they work like this: Shaking the flashlight causes a magnet to pass through a coil. This produces electricity that charges a large capacitor (a kind of storage cell). The “bulb” is a LED (Light Emitting Diode) that lasts forever without burning out.
I placed a piece of red “brake light repair” tape over and around one of the lights. Now I would never have to buy batteries, those expensive Krypton bulbs, or worry about leaving my flashlight on again. Or so I thought…

Our club has a winter swap meet every year. At one of the vendor’s tables was a dealer selling Great Red Spot Faraday Principle astronomy flashlights. These had an actual red LED inside of them so no red tape was needed. I proudly told the vendor of my homemade astro light. He smiled and asked how much I paid for mine. I told him $10 (his were $25). He replied that mine was likely a counterfeit and surely had batteries behind the reflector. I chalked up his comments to sour grapes, took a flyer and went on down the rows.

When I got home I opened up one of my shake lights and indeed it had 2 small coin cell batteries inside (like the kind on a computer motherboard, or inside the light-up shoes of a stripper). Like an idiot, I had been shaking this thing for months!!! I showed my neighbor and he said he had bought one too, but a different brand. We opened his up and sure enough, batteries, covered in green shrink tubing.

So, I called Great Red Spot and ordered myself two REAL Faraday flashlights, one red light, one white light (for my truck).

The GRS flashlight is heavier than the fakes by about 3 times the weight, but still lighter than a 2 C-cell MagLite. A one inch diameter magnet passes through a pair of coils (thus it charges on both the up and down strokes). 2 smaller magnets lay at the ends of the larger magnet’s path to repel it away from hitting bottom, so you have to really try hard to get it to hit the stops (very cool). The electricity this action produces is stored in a 3 Farad capacitor located behind the reflector. Those of you who are into electronics know how large 3 Farads is, for the rest of you, it’s a lot.

The unit is completely sealed and waterproof. No rubber switch covers or O-rings are used. The switch on the outside of the unit contains a magnet that causes a Reed Switch to engage on the inside the flashlight body (also very cool). Bringing this flashlight near any magnetic source causes it to light up. The switch is made of glow in the dark plastic, for easy location in the dark.

Two or three shakes are all that is needed to get enough light to do most astro related duties. Thirty seconds of shaking generates enough light to do your end of the night tear down. I tried to see how long the light would continue to glow, but after an hour, I gave up waiting. Suffice it to say, you get a lot of light for very little effort.

The GRS flashlight is made of a tuff plastic that does not seem at all brittle in cold weather. This is important for us Northerners. A bathtub dunking shows the GRS floats.

The red flashlight has a tighter beam than the white flashlight. This makes sense for the purpose it was made for, as nobody would be lighting up the backyard with a red flashlight. The white LED actually glows with a slight blue tint, compared to the yellow tint of a Krypton bulb.

In all, I am happy with my purchase. GRS has a clever, well thought out design. It comes with a lifetime warrantee (it better, as you can't open it up to service it). Saving the earth and never having to worry about batteries are both good things!

Check this accessory out at: