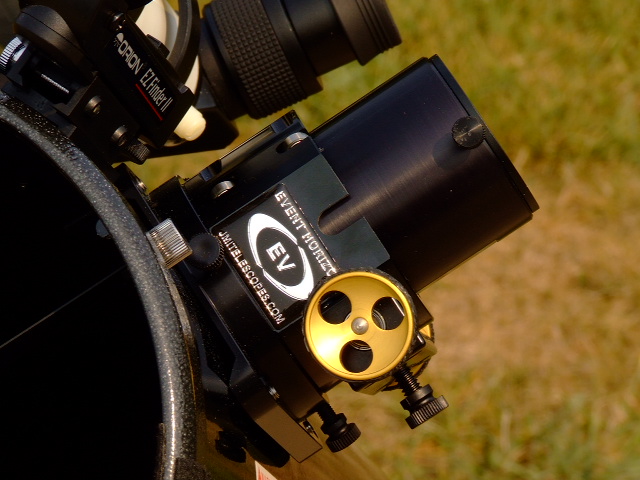 JMI EV2 FOCUSER FOR NEWTONIAN TELESCOPES:
The Good, the Bad, and the Beautiful.

When I purchased my Chinese-made 8” Dobsonian, the one thing that bothered me the most was its stock focuser. It was not an entirely bad one, but the single speed Crayford was not up to par with other focusers I used, even the import ones. Although it got the job done, its performance was crude making it difficult to nail the focus at very high powers. Would the JMI Event Horizon 2 make a significant improvement for the money? I decided to try it out.

THE GOOD
First, I would like to say a word about JMI’s customer service. I would rate this as excellent. Every time I called for help, I got it. They would always give me good advice and point me to areas on their website where I could get more information. A while back, one of my telescopes with a JMI Crayford took a tumble to the driveway. They repaired the damaged focuser quickly and, in my opinion, for a reasonable fee.

The EV2 focuser arrived in excellent condition, with everything I needed to install it to my 8” Dobsonian, including the tools (removal of your old focuser may require additional hand tools). Installation was so easy even a caveman could do it. The first improvement that I noticed is that the EV2 has adjustment screws for proper alignment. My stock focuser did not, and I discovered later that this was causing a problem with my collimation. The focuser also has a lower profile than the original one, that is, it does not stick up as high as the old one. This might make it less vulnerable to getting bumped or snagged on something when transporting the telescope. The EV2 comes with a uniquely designed 2”-1.25” adapter that maintains the low profile, although other after market adapters will fit it as well. This low profile created an issue, which I will discuss later.

With my first light under the stars, I discovered that, by coincidence, the focuser installed with excellent alignment, so I made no further adjustments. This immediately improved the collation of my telescope by 100%. I could easily see a difference in image quality, both in the star images as well as lunar and planetary targets. (The original focuser might could be aligned, but by the difficult and tedious task of shimming it. The four adjustment screws on the EV2 make a much easier system for collimating the focuser with the mirrors.) Adjusting the tension on the drawtube is accomplished by a single knobbed screw. JMI actually supplies two screws to choose from, one each nylon and metal. The metal screw allows a tighter lock on the drawtube. I chose the nylon since I was not using the scope for astrophotography. The action was a bit on the lumpy side, which I will go into detail later. As I used different eyepieces that require different positions to focus, the alignment appeared to be perfectly maintained to me.

Another benefit over the stock focuser was stability. The EV2 is rated for an 8 pound load. I don’t know the rating of the original focuser, but the EV2 seemed to me to hold even my heaviest 2” eyepieces with more firmness and less slippage. I would frequently have to readjust the old focuser to accommodate different sizes of eyepieces, but I did not have to do that with the EV2. It also does a very good job of holding the additional weight of my binoviewers and two eyepieces. Yet another feature of the focuser that I like: it rotates on its own base. I can rotate it to suit my own preference and tighten the lock screws to hold it in place. I no longer have to grasp the focus knob with, what is to me, an unnatural hand position. This may seem like a little thing, but for me it makes focusing a bit easier if I don’t have to hold my hand in an uncomfortable position. 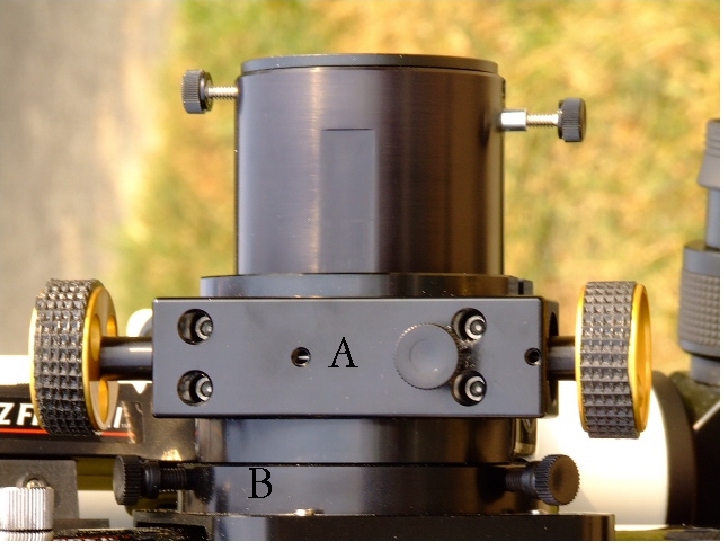 Above photo shows (A) the large tension adjustment knob and (B) lock knobs for rotating the focuser on its base.


THE BAD
I have two issues with this focuser. The first is the low profile. It turns out that some of my eyepieces like my Televue Radian and Naglers will not get to focus, the drawtube tops out before the image is in focus. This is certainly a problem, but the solutions are simple. The first one is just to pull the eyepiece out of the adapter slightly, allowing you to come to focus. The EV2’s adapter has a brass compression ring that grips the eyepiece tightly even in this position. Some people though, may not like the idea of leaving their expensive eyepieces half-way out of the focuser. So the second solution is to use an after market adapter with a higher profile. I have at least one adapter that will allow just enough outward focus travel to get these eyepieces to focus. The flip side to all this is that the EV2’s lower profile will allow me to use my Stellarvue BV1 binoviewers with only the 2x BVA, so no additional extension is needed. Your mileage may certainly vary on this feature. (Note: JMI does offer longer drawtubes as a customized add-on for addition cost.) Below are two photos showing the drawtube racked all the way in, and fully extended. Note the very low profile of the adapter.

The second problem is the smoothness, or rather lack of it. Instead of the drawtube sliding up and down with a smooth motion, there is a bit of “lumpiness” to it. Now, this does not really prevent me from getting an easy, accurate focus (even at very high power). If I tighten up on the tension it tends to smooth out, and it also seems to be getting smoother with time. I don’t know how common this is, but I now have two JMI brand focusers with the same feel to it, and I have corresponded with several others that have raised the same concern. Since I like a “tight” feel to my focusers, this is not a problem to me. But others, especially those who like a looser adjustment to their Crayfords, may take issue with this if it is a common characteristic of JMI focusers.

THE BEAUTIFUL
And now for the aesthetics: The JMI Event Horizon 2 is simply a beautiful piece of craftsmanship. Fit and finish is excellent all the way through. It has a very deep, solid black finish with the glow of gold in the focus knobs. It makes a very attractive addition to the finish of any optical tube, in my opinion. I can tell just by holding it and looking at it that it is a very well made instrument, there is nothing cheaply made anywhere inside or out. It is very appealing to look at, but of course I spend most of my time looking through it.