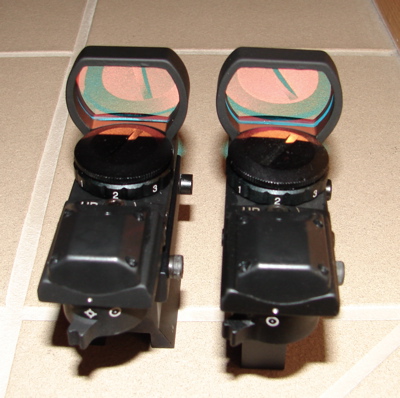 For fast pointing on short focal length telescopes, nothing beats a unit power finder. Many options exist, from the venerable Telrad to the economical Rigel Quick Finder to the daytimer's Sol Searcher. Two of the latest entries into this niche are the William Optics Red Dof finder and the Stellarvue F2 finder. As it turns out, they are the same unit.

As you can see, the upper portions of the finders are identical. The finders (hereafter referred to as the WO, SV or SV/WO) consist of a sturdy metal frame, a glass element on which the red dot, circle or crosshairs project, allen wrench adjustments for altitude and azimuth, a numbered 0-7 dial for on/off and intesity, and a rear toggle for selecting the shape of the finder. There is also a rubber sleeve for covering the finder window when not in use. The build quality is excellent, and the overall feel is solid bordering on indestructible.

Below the main housing, the similarities end, and the differences, though minor are significant. The WO sits on a solid metal stalk which quick releases from a base bracket tailor-made to conform to the curvature of William Optics refractors. I have an 80mm WO 10th Anniversary Apo, and the base fits like a glove. WARNING: If the base bracket does not fit your OTA, you will be off to the machine shop (or to purchase an SV base). William Optics does not sell any other bases or adapters. I consider this a major negative for the WO. 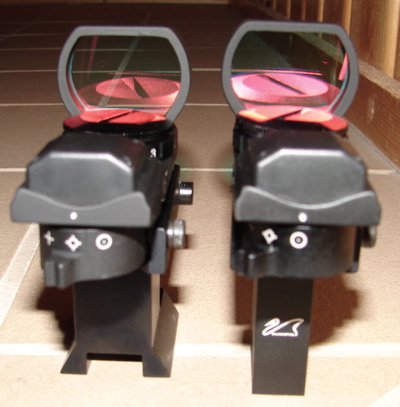 The Stellarvue sells without a base ($69 for the SV, $89 for the WO [base included] at Anacortes), but several base options are available. The most flexible option is the standard Orion-type dovetail, as seen in the photo on the right. The lower dovetail base width is 1 3/16" and works well with Televue and Orion base brackets that I own. Both the WO and the SV are set up for quick release, and both reliably reposition the finder without the need for re-alignment.

Functionally, there is no difference whatsoever between the units. The first the finder is used, it is necessary to align the finder with the OTA. This is easily done with allen wrench adjustments on the upper left side of the unit. The allen wrench is included. Normally, I would advocate for tool-free adjustments, but in this case, I have found that once the unit is aligned, it never really needs to be touched again. For those who intend to use one finder on several bases, this would have to be considered another drawback. I suspect that the addition of adjustment knobs was not done out of concerns for the size and compactness of the finder.

The upper right photo shows the toggle adjustment for finder shape. Unlike the Telrad, there is no explicit calibration/corellation between the size of the pattern and the angular size of the final projection. I tend to use either the crosshairs or the circle, but your milage may vary. Keep in mind that this is a unit power finder--the particular pattern you choose does not much matter. Get the pattern on top of your target and you are close enough.

The upper left photo shows the numbered thumbwheel for turning the unit on/off and for selecting intensity. The disc battery (included) is housed inside this thumbwheel. The numbering is from 0-7, but a more accurate numbering might be 90-97. Simply put, the unit is bright in its lowest setting, and moves up only slightly from there. When using the finder during the day, I tend to set to 7, but 1 is also visible against a reasonably dark background.

Despite the issue with brightness, the SV/WO is very easy to use. Simply sight through the window with both eyes open and you will see the finder pattern projected on the sky. Sighting with one eye also works, but seems to exacerbate the brightness issue. Dew can be a problem, but if you use both eyes, a fully frosted window will not seriously affect performance. 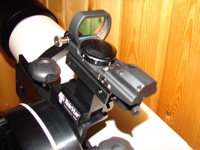 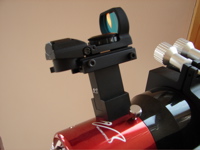 It is worth considering who benefits from a unit power finder. The accuracy of such a device is on the order of 1/4 degree, and thus is perfect for the observer who can see a naked-eye target and wants to align on it. These days, one quickly recognizes that such a device is more than adequate for the user who simply wants to complete a quick two-star alignment on his or her DSC's. You will not be happy with such a finder if your goal is to hop from 7th magnitude star to 7th magnitude star across 20 degrees of sky to an NGC object to be named later. Such activity is best left to users of a magnified finder (which allows for sighting of fainter stars), or to the Telrad, with its 1/2, 2 and 4 degree circles and a cult following of aftermarket, Telrad-specific finder charts and software. For the obvious reasons, this sort of finder is inappropriate and unsafe for solar use. Unit power finders do not have the pointing accuracy for locating an object at high powers. It is necessary to acquire the object at a lower power, then move up. I have had consistent success with locating an object at up to 125X.


Why You Don't Need One, and Why I Own Two

There are many other options on the market that are just as accurate as the SV/WO, and for substantially less money. The SV costs $59 plus up to $38 for base, and the WO is $89, base included. The Telrad and the Rigel Quick Finder are each $40, aftermarket dew straps and/or covers are available, and a host of finder charts are available for their known-diameter circles. Why should anyone pay extra for the SV/WO?

The only real advantage of these finders is aesthetic. Personally, I can't imagine taping a Rigel Quick Finder onto my NP-127 or DM-6. I have known others who did so, and with good results. I use a QP on my son's small dob, and I have used a Telrad on a larger dob. I have been happy with their performance. The SV/WO is not a small finder, but neither does it stick out like a sore plastic thumb on my refractors. It looks like it belongs with the equipment. This may be vanity, but my WO lives in the living room, and the NP127 lives in the family room, in both cases with the consent of my wife. I find the pointing accuracy of the SV/WO more than adequate for my two observing patterns--DSC driven with the NP127/DM-6 and quick, generally rich-field look with the WO 80mm. If the appearance of a plastic finder on your scope does not bother you, save your money.

Unless you own a WO refractor, buy the Stellarvue. William Optics would be well-advised to consider the issue with the base bracket in a hurry. If you already happen to own the WO finder, you can order Stellarvue bases with confidence--they will work. Whichever you choose, remember to turn it off when you go inside and enjoy the views.
Comments (0)