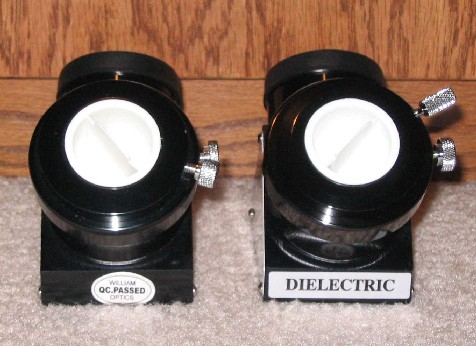 For almost three years now, I have been the proud owner of the same Astronomical Accessory. For me, that is quite an accomplishment. Since I have bought and sold every other telescope, mount/tripod and accessory that I have owned in the last three and half years. When I bought my first APO refractor on Astromart, (A beautiful Takahashi FS102), the seller suggested that I look into the Williams Optics 2 inch diagonal. At that time it was about $98.00 and was not going to break my piggybank after shelling out some serious bucks for the Tak. When it arrived, I was more than impressed. Heavy, solidly built, brass compression rings, complete satisfaction. All the phrases came to mind: This thing “runs circles around my old 1.25” diagonal”, “puts it to shame”, etc. Then again, as we all know, WO is famous for bringing us top-notch quality at a fair price, with build-quality to boot. It was a very easy decision to make at the time since two of the most famous high-end diagonals were almost three times the cost of the Williams Optics Diagonal. I was so satisfied with my new Williams Optics that I gave little thought to buying any other diagonal. Oh, the thought crossed my mind, but I was more interested in aquiring the best APO or MCT that I could get my hands on. During that time I have used this same diagonal in every scope that I have owned from an SCT, a couple of MCT’s, and several APO’s in the 102mm to 128mm range, along with a wonderful Stellarvue Nighthawk II, and have been completely satisfied.

Enter . . . The Williams Optics Dielectric 99% Reflectivity Diagonal. OH, sure, it costs a bit more. One must be willing to shell out another $41.00 extra for this puppy. But, in the world of “Backyard Astronomy”, ( as the phrase goes), most, if not all, are looking for every little extra bit possible to improve this passion that we possess, or should I say, that possesses us.

Enough rambling on. So the question: What’s 2% worth anyway?. Well, as the gentleman on the other end of the line said when I ordered the WO Dielectric: “Its 2% extra coming right out of the Diagonal.” Nothing is lost inbetween. A 2% increase in light through-put is exactly what I would be getting. I was sufficiently convinced to give this new diagonal a try. So I ordered the new WO Diagonal on the spot.

When it arrived, I already knew what to expect. The same build quality, the same brass compression rings, just as attractive and even more so than the original because, the swan symbol is on the side and . . . the word DIELECTRIC is displayed right on the front of the Diagonal. A very nice touch. I’ve had it now for a couple of months and have used it extensively in my SV102 APO and my NHII. I have done extensive comparisons between the original WO 2” 97% Reflectivity and the new WO 99% reflectivity DIELECTRIC Diagonal and have come to the bittersweet conclusion that my original WO Standard will have to be given up for adoption to a new home. WHY?

Every object that I have observed intensely since receiving the WO Dielectric really is 2% better. In reality, everything looks just a little more crisp and 3D. Maybe my mind and eyes want to see it that way. But I am thoroughly convinced that everything that I have observed since then is better. From Jupiter to Saturn, the Moon to M42, M45 to Sirius to doubles takes on just a little bit better contrast. A little more brightness. And that is what we are after anyway. Every little improvement in the equipment we observe with. The new WO Dialectric is every bit worth the few extra dollars to be able to squeeze out just a little bit better performance from the rest of our equipment and therefore, enjoy our passion just a little bit more.

By the way, I was impelled to try an off-brand quartz dielectric since I live in Northern, KY and temperatures here swing from 100 degrees F to 0 degrees F, and can do a 40 – 50 degree temperature change in a day. I thought it would be nice that this diagonal would not be affected by thermal breakdown or such vast temperature changes. Although this is a very nice diagonal with great reflectivity, it does not possess the attention to build quality and astetics that the WO Dieletric does. Besides, I have never noticed a problem with temperature change so long as I set my scope and all glass accessories outside 30 minutes early so that they can reach ambient temperature. Any variation in temperature change has never distorted the view coming from any of my equipment once it reaches ambient temperature, including either of my WO diagonals.

At the current price, the WO Dielectric is still a little less than half of a couple of other big name Dielectrics. Although, I must admit that I have not done a direct comparison between the WO and other high end diagonals, I am completely satisfied with the new Dielectric. Reputation alone says that such other diagonals are fantastic accessories to own and use. I merely wish to point out that the WO is a very fine piece of equipment that will brings years of enjoyment.