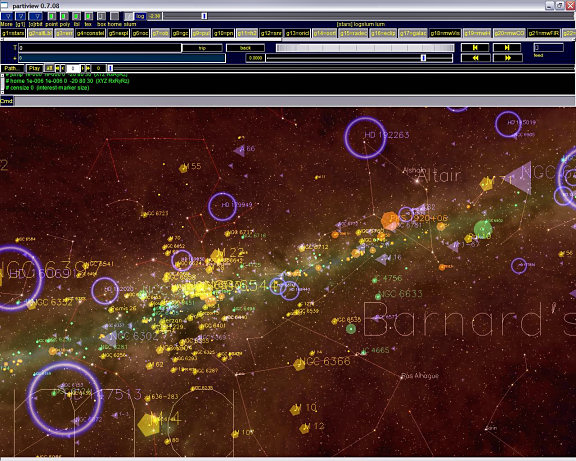 Partiview doesn’t seem to be widely known by amateur astronomers. That is really too bad because although this software is a bit quirky (what do you want from “Freeware”), it has some surprisingly unique functionality and nerd appeal.

This software might at first blush appear to be a competitor to today’s popular desktop planetarium programs, but it is much LESS than that, and at the same time, much MORE than that. As I said, it is really kind of unique, and as such, not so easy to classify.

What I THINK it is, is a TEACHING tool. And a LEARNING tool… Using Partiview will teach you an absolutely incredible amount about our galaxy. The basic premise of the tool is that it lets you create and store “Flights” around the galaxy. Because of this, it allows you to see a perspective that many freeware programs can’t begin to match. Using your mouse, you can actually start near the solar system and FLY to the Pleiades!!! HOW freaking COOL is THAT! You can record the trip for playback in the future, or you can simply jump into your starship “Laptop” and cruise any quadrant of the galaxy you choose, at WARP 10! MAGNFICIENT!

There are a great number of controls that allow you to control what you will see in your journey. There are tabs across the top of the window that allow you to toggle on and off thinks like galactic clusters (gc), planetary nebula’s (pn) and even the VISABLE MILKY WAY (WOW this is utterly fantastic to see). In addition, you can use a slider to adjust the relative size and transparency of the shaded area that designates each object. There are over 20 different classes of objects or features that can be turned on. The list is pretty extensive, but includes common telescopic objects like clusters and IC objects, but also adds color-coded shading for features such as the IRAS Composite all sky survey, the 2MASS all sky survey, and even the Gamma-ray all sky survey (and OTHERS!). This is SUCH a VERY unique feature. “Seeing” the galaxy at all of these various wavelengths one at a time, or turning them on and off in combinations reveals many interesting patters and relationships that you simply can’t visualize any other way. This function ALONE makes the software extremely interesting.

The “Learning to Fly” chapter of the book makes it seem like you just bought a flight simulator program, but in some ways, this program is FAR more entertaining than relatively “Dull” flight simulators… Here, the focus is not on things like manipulating flight controls or following Victor Airways to line up for final approach on R27L at Hartsfield International Airport. Here you move in 3D ACROSS THE FREAKING MILKY WAY! The feeling is VERY exhilarating. Fly out to the Pleiades and see the true 3 dimensional relationship of the member stars… Hang a big looping left and swoop down and scream through Orion at Warp 7!... Turn and fly back to the Solar System. Flight controls allow you to move in several different ways, and offers different velocity controls. It looks BETTER than the opening credits of Star Trek when you watch stars stream past you to pass on either side of your forward view screen! There is even a mode that allows you to explore our own Solar System.

And there is MORE. You can BOLDLY go where NO man, not even Captian Kirk and his crew ventured. The latest version of this software has an “Extragalatic” mode. When you start in this mode, you are placed OUTSIDE of the Galaxy! You can actually FLY across a BIG part of the Universe! You can fly at WARP FREAKIN 1000! Now the graphic here aren’t quite as impressive, but being able to navigate around the UNIVERSE in 3D make sit VERY hard to complain. Flying around the local cluster and looking at the distribution of nearby galaxies is quite fascinating. A little “X” on the Milky Way even marks the big blue marble so you can orient yourself accordingly (Upside down for people up and right side up for my Aussie pals)

Now the only negative (as if anything this good, and distributed freely COULD have any REAL negatives) is that the interface will feel odd. This isn’t a video game. In addition to some less than intuitive functions, there is also some command line usage that might be required to get the most from the program. I am not going to go into detail here, but unless you need to do more advanced functions, MOST of the functionality CAN be accessed by the various buttons and sliders on the control panel. And I will say this… Once you USE the program for any length of time, you might come to realize that considering the very unique qualities of this software (it DOES things that typical planetarium programs can’t do), the controls are actually fairly logical, and the functions requiring command line usage are not so much to ask considering the nature of the functions in question.

The manual is a mixed bag. It does not contain any graphics, so you have to pay attention to the screen when you read. Some of the sections aren’t all that clear, but if you work through the tutorials, it will come together.

And this is not a true planetarium program. In those programs, you can zoom IN on a piece of sky. With Partiview you zoom THROUGH a piece of sky! I can’t TELL you how COOL that difference is. And the rich layering of the various survey data makes the voyage all the more fascinating.

I used to open this on Airplanes on long trips. I had fellow travelers that caught a glimpse of my laptop screen as me if I was an astrophysicist, or an astronomer, or even an ASTROLOGER! How impressive is THAT! But rendering the universe is such exquisite detail, and flying through it at Warp 10 to explore more than the Starship Enterprise did in 4 incarnations and a half dozen movies can make a 15 hour flight across the pacific a few hours shorter.

If you REALLY want to explore our galaxy and our universe, I guess you will have to reach deep to build your own starship, but Partiview MIGHT be the the best way of seeing it until real starships roll into your local dealer showrooms.

Hayden Planetarium’s Partiview gets My HIGHEST recommendation. Whatever flaws it might have, the unique nature of the software and the FREE PRICE make it a “Must Download” for ANYONE that wants to cruise the light-fantastic. I give it 8 thumbs up (I am really just an Altarian Arachnopod in a skin suit you know... Just passing through on my way to the Sirius B system.. Be seeing you).

THANKS Hayden Planetarium. What a WONDERFUL piece of Software!


And Thanks, Astromart. You are my favorite Web Site.