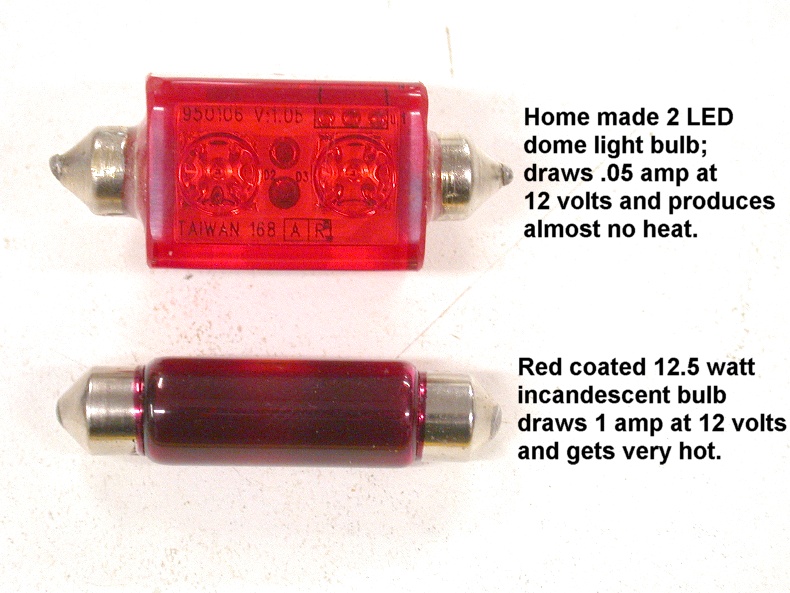 I've been using my pickup truck for a number of years to haul all my astro stuff to star parties. I found it annoying that every time I opened the truck door to retrieve something, the bright white dome light would go on, messing up my night vision and eliciting grumbles from others. With no dome light control, the only way to turn the light off was to remove the bulb. I figured switching to a red bulb would help but the dome light used a really oddball bulb and I could not find a red version anywhere.

Then one day, while shopping at Walmart, I ran across a small red 12-volt LED truck clearance lamp in the automotive department and realized that I could modify it for use as a replacement for the bright white bulb in my truck's dome light fixture. It took about an hour, using a Dremel Moto Tool and a soldering pencil to create the replacement. I installed it, with no modification to the dome light fixture and it works great. It's not too bright and provides just enough red light to see in the darkened truck cab.

Last year I started leaving my gas gulping pickup at home and taking my more economical small station wagon to star parties. At least with the car I could turn the interior lights off but since I worked out of the open tailgate of the station wagon, I figured it would be handy to replace the rear dome light bulb with one like I made for my pickup.

Another trip to Walmart and I had the required red LED truck clearance lamp (about $6). This time I did a little cleaner job of modifying the lamp and documented it with some photos. I again cut away the excess plastic of the clearance lamp with a hacksaw blade, then cleaned it up with a Dremel Moto Tool. The stock bulb uses two conical metal end caps as electrical contacts, so I found a similar burned out bulb and broke the metal end caps off the glass tube. I carefully soldered the wires from the LED lamp to the end caps, then used 5-minute epoxy to glue the end caps to the LED lamp.

The end result was a red two-LED light bulb which fit right into my car's rear dome light fixture with no modification. I can turn the light on and off with the rocker switch built into the light fixture.

NOTE: Since LED circuits are polarity sensitive, it's important to determine the polarity of the wires or contacts in the dome light to ensure proper operation. 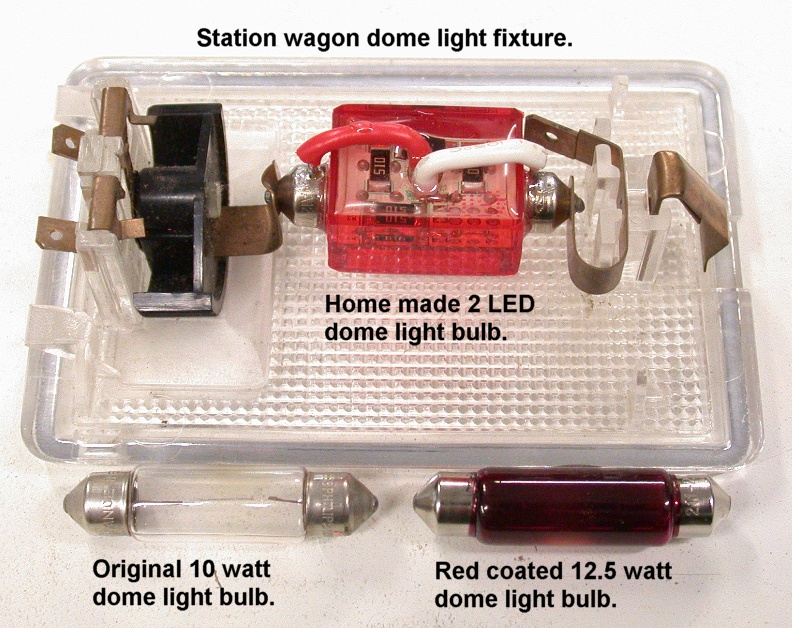 The advantages to the red LED dome light conversion are: