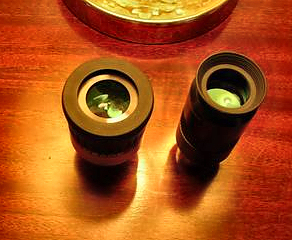 I got my first “real” telescope, an 8” f/4 Schmidt-Newtonian, two years ago after seeing Mars. I took advantage of a special on Meade Series 4000 Plossls at the time, but soon became frustrated with the short eye relief as I am an eyeglass wearer. So I got the 26mm Series 5000 because of its long eye relief and wide apparent field of view. The fact that this focal length eyepiece produces an optimal 6.5mm exit pupil with my scope factored heavily into the decision also.

The 26mm has an advertised 19mm of eye relief, but it feels more like the 17mm of my 40mm Plossl than the 20mm eye relief of my Vixens. Still, there is little reason for concern about glasses touching the rubber eyeguard if you retract it all the way down. However, retracting the eyeguard all the way down could result in scratching your glasses against the eyepiece. There is a metal ring around the eye lens to help protect the eyepiece, but don’t count on this to protect your glasses! So I would suggest leaving the eyeguard up just slightly to be safe, which still provides comfortable eye relief for use with glasses. Certainly better than the roughly 13mm of eye relief of the 32mm Series 4000, which required me to put my eye up against the rubber eyecup. This usually resulted in having to clean my glasses after an observing session.

One thing I was nervous about with having an f/4 scope was field flatness and edge of field correction. I was pleased that there were no obvious distortions with the 26mm. Scanning the starfields at high speed gave flat, pin-cushion free images that reminded me of sitting in front of a microfiche machine. Upon close inspection, I could see some stretching and distortion of bright stars as they slipped out of the field of view, but I had to look for it. With a tracking telescope, there isn’t much concern about objects slipping out of the field of view, but this may be a concern with a telescope that doesn’t track objects as they move across the sky.

Optically, the 26mm is a strong performer. It split Mizar in two at 31x slightly better than the 32mm Series 4000, which may be the result of higher magnification. Off-axis, the 26mm could still split Mizar, but not as cleanly as the 32mm. Also, I noticed the Dumbell Nebula was noticeably brighter through the 26mm than the 32mm. While this is probably due in part to better coatings, I suspect the difference is also a result of an optimized exit pupil (the 8mm exit pupil of the 32mm resulted in some lost light) and the higher magnification darkening the suburban sky. Of course, the smaller exit pupil would dim the view through a higher f-ratio telescope, and higher magnification would not darken the background sky if it were not for light pollution. So you have to take your own circumstances into consideration.

In summary, the Series 5000 26mm outperformed my 32mm Series 4000 by providing more magnification and eye relief while increasing the field of view that I could take in with glasses. On-axis it is very sharp, and only suffers slightly off-axis (in an f/4). Considering I will primarily use this eyepiece for locating and centering objects and then switch to higher magnification eyepieces for closer inspection, I am very pleased with my acquisition!


Click here for more about the full line of Meade eyepieces. -Ed.
Comments (0)