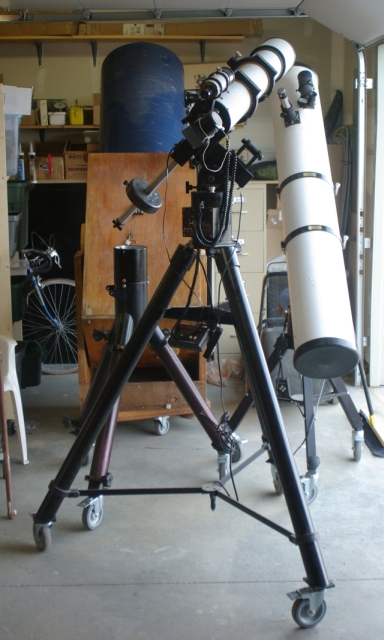 I’ve been using a Losmandy GM8 mount for almost two years now, and it has served me well for my 8” f/7 homebuilt reflector, and a Photon Instruments 5” f/9 refractor with Aries Chromacor. I am now putting a 17.5” Dobsonian (the big wooden box with the blue tube in the background) on a diet—and I’m hoping to get this beast light enough (under 55 pounds) to mount it equatorially.

(You noticed the casters under every telescope? That’s what I make.)

But on what mount should that rebuilt Dobsonian go? Losmandy advertises the GM8 for payloads up to 30 pounds. While it does fine with the 8” f/7 reflector (which weighs about 25 pounds with the dovetail plate and rings), it clearly isn’t going to handle more than twice that weight in a very composed manner. The Losmandy G-11, the GM8’s bigger brother, is advertised to handle payloads up to 60 pounds—-but the G-11 isn’t cheap, even on the used market.

The Celestron CI-700, while no longer sold, was a private label equivalent to the G-11, and it was apparently made by Losmandy. CI-700s, for a variety of reasons, sell for hundreds of dollars less than the equivalent G-11. I recently bought an extremely well kept CI-700 equatorial head with Celestron Advanced AstroMaster for $1200. (I already had tripods for a G-11 and a CI-700, for reasons explained here.)

A criticism that I have heard is that the CI-700 was more cheaply manufactured than the G-11. I can only compare the finish of this CI-700 to my GM8, and I can’t see any areas where there is a clear difference—-both seem to be nicely machined, anodized, and polished. The counterweight that came with the CI-700, however, I found unpleasant to handle compared to the Losmandy labeled weights, for one simple reason: right angles, instead of radiused edges. You really feel the difference with these heavier weights, as the right angles cut into your hand.

As my previous comparison review of the G-11 and CI-700 tripods points out, the CI-700’s non-adjustable, supermodel length legs are a nice feature if you have a refractor or catadioptric telescope. If you plan to use the CI-700 head with a reflector, however, the CI-700 tripod is probably not the best choice—-unless you like spending much of your time on a stepladder.

If you are intent are attaching the G-11 with the CI-700’s cylinder and head, perhaps because you need something intermediate in height between the G-11 and CI-700 tripods, there is a way to do it. I machined some ¼” thick aluminum tabs to allow you to mate these two parts. It is far more solid than it looks!

Here you can see the latitude adjuster—-and even when fully loaded, it works very smoothly and cleanly for making fine adjustments. You can also see the bubble level and one of the adjustment screws for making very fine adjustments in where the polar axis points.

The CI-700 saddle is a bit different from the GM8 and G-11 saddles. Note that there are two knobs for clamping the dovetail into position—which makes me feel a lot more comfortable when putting a 40 or 50 pound payload in place. On the downside, where the G-11 saddle is a tight fit—and you might have some trouble getting the dovetail started into the saddle because of it—the CI-700’s saddle has actually too much space, and it is surprisingly easy to tighten down the clamps—and discover that you have not locked the dovetail into the saddle on both sides. I didn’t drop the scope, but be careful!

You can also see one of the clutch adjustment knobs for the declination axis in this pictures. There are two of these for each axis, and they let you achieve a silky smooth motion (assuming that you have the mount at least roughly balanced).

It took a few minutes to figure out how this could possibly work. I didn’t see how you could ever see Polaris (or any other star) through this—and then I noticed that I had to move the mount in Right Ascension until the entire upper part of the mount was out of the way.

I must confess that I am not terribly impressed with the polar alignment scope. Optically it isn’t much. I suspect that you would do almost as well removing the scope, and just putting Polaris through the polarscope rings with your naked eye—and with a lot less aggravation.

One of the advantages that some of the newer equatorial mount designs enjoy is that all the cables are hidden on the inside, instead of draped all over the mount. You have the power cords going to the battery, the Right Ascension motor, and the Declination motor—and then you have the cords running to the digital setting circles. Sometimes, a clean sheet of paper is the way to go.

The hand controller is unremarkable. It is light enough that it doesn’t really need to be attached to anything, but the previous owner had the good sense to attach a plastic hook to the back of it, so that he could hang it on the shelf where the AstroMaster rests.

The Celestron Advanced AstroMaster is a digital setting circle system much like those sold by a number of other manufacturers. If you have used any of these systems, you won’t have much to learn about using this one. The tray on which the AstroMaster sits is an aftermarket product—and it works just fine, although it is held in only by gravity. I guess I would have preferred something designed to grip the AstroMaster a bit more securely.

I have two criticisms of AstroMaster on the CI-700. First of all, the cables for the sensors are disturbingly exposed—just screaming for someone to bang into them.

The operating instructions that came with the Advanced AstroMaster also leave a bit to be desired. At the beginning of the manual (what might be considered the quick start section), it tells you to hit the ENTER button when you see the “SET DEC=0” prompt. Later, in a more detailed section, it tells you that you need to move the declination axis to the zero degree setting. It also appears that you need to start out with the declination axis at 90 degrees, then move it to 0.

I was not pleased with the declination encoder housing. It uses two very small set screws from the side to prevent the encoder from moving—but these set screws share the same space as two of the bolts that secure the housing to the declination shaft, coming up from the bottom. The instructions are clear that you need to secure these set screws before inserting these two bolts, but I can see someone who doesn’t like reading manuals putting all four of the bolts in place, then trying to install the set screws. (And no, it doesn’t work.)

Some people prefer not to buy Chinese goods, for a variety of reasons (artificial and predatory currency exchange rates, labor and environmental practices, and until recently, extremely poor quality control). The CI-700 was “Made in USA”—and at current used prices for the CI-700, this seems enough reason to consider it instead of one of the Chinese made equatorial mounts of similar capacity.