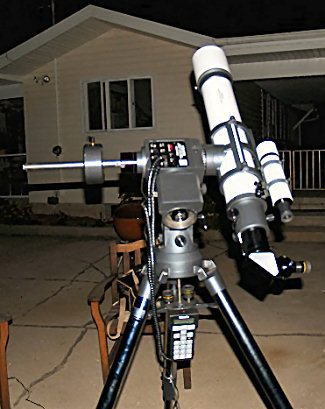 I purchased the Meade 102ed / LXD650 package from Meade outlet for $1,700. It arrived 12 days after purchase. I put the mount together during one of the NBA playoff games so attention to instructions was minimized. It was a very simple assembly. The manual does warn against plugging the ac to 18v converter into an outdoor outlet. I have a screened porch with indoor style outlet so that isn’t an issue from my house. Unfortunately it renders my rechargeable 12 volt field battery useless until I purchase a 12v to 18v converter ($70).

My impression of the mount is it is pretty beefy for the 102, almost overkill. Dampening time is less than .5 second with the leg locker tightened and tripod legs extended about half way. In fact, I was astonished the first night out with it at how solid the mount is. It is a more substantial mount than the LXD55 that is for sure. It’s also more solid than a GM8. That’s good because my intentions are for astrophotography. Also important to me is the mount’s ability to carry a larger optical tube assembly like a 9.25” SCT, in which it should have no trouble. The mount finish, machinery and aesthetic appeal are not to the levels of the GM8 and other usual suspects (AP 600, Tak gems, Parallex, etc.) but it is good. My past German equatorial mounts include a CG5, Televue Equatorial with single drive, two Losmandy GM8’s, two LXD55’s and a Tal 120.

The setup of the mount and tripod is simple and takes 5 to 10 minutes. First I pull out the extension cord and hook up the AC converter. Next I carry out the mount, tripod and counterweight (usually altogether), attach the power cord, attach the keypad, extend the legs, tighten leg locker and I’m nearly ready to go. Be careful while carrying the mount. The mount will tip back because there is no counter bolt to the latitude adjustment knob. It is crucial for steady tracking that the mount is perfectly level. The mount hub is equipped with a bubble level but it still takes a few minutes to get it perfect. The counterweight shaft is different on this mount than others I’ve used in that it can be retracted inside of the mount and locked in that position. It helps for storing and can be an additional balancing tool. I’m not a big fan of the cradle/rings all in one thing Meade uses. It’s a dedicated tube ring for just this mount. You can’t just remove the OTA and slide in a different one without the same cradle system. Fortunately there are companies that sell adapters so you can use Vixen style dovetails and rings. I’m used to those but so far have not purchased the adapter or new rings. I’ll do that once I get another telescope and the mount needs to be shared.

The LXD650’s computer is interesting. It’s very old school and by old school I mean it’s large versus the smaller hand controllers/computers used with the LXD55/75 or controller for the GM8. It’s always a good idea to input your site info prior to getting outside. You only need to set it once per location and with the help of the internet, finding your latitude and longitude as well as Greenwich Mean Time is a cinch. You can store up to four viewing sites.

During your initial mount set up, you should be aligned with Polaris as best you can. A polar alignment scope is not included in the telescope/mount package but available by Meade dealers for around $55. After turning on the drive, the computer takes a few seconds to initialize. You select Telescope then Align from the computer and it asks you to move the telescope into the alignment position - 90 DEC 00 HA (Hour Angle). This is unique to the LXD650 versus the LXD55/75. The manual says to rotate the telescope so that the RA pointer and HA pointer are in line with each other so the telescope is parallel with the ground. I really don’t know what the HA pointer is or where it’s located. I find it difficult to explain the rotating hour clock ring that is on the mount. It has a small set screw that allows you to rotate the clock ring and tighten it in any position. The clock ring consists of two sets of numbers from 0 to 24 in opposite directions (Northern/Southern). I do my best to set the ring at 00 in the exact center and tighten. I didn’t set the HA position to 00 for the first few attempts with it and became frustrated because it was telling me to center various winter stars – in June. I was also doing something else wrong. Once you have the 90 DEC 00 HA position, the Right Ascension drive slews the telescope to normal telescope position. From there it asks you to center Polaris in your eyepiece by using the azimuth and altitude adjustment knobs. I’m guessing you will be really off track if you decide to center Polaris using the controller. Actually that was original error number two for me (as I previously stated I watched basketball and didn’t pay attention to the directions). After that it’s pretty simple. The computer selects one of 33 bright stars as the alignment star, currently using Altair. It slews to the star and if the steps I mentioned are done correctly, the alignment star will be in the eyepiece field of view using a Meade 20mm SWA. Then you center the star, press Enter and you are ready to go. Unlike most goto systems, there is only one alignment star. There is an option for Refined Polar Alignment that will increase the precision of the mount using polar alignment in two or three 15 minute intervals.

The computer keypad is pretty user friendly and full of functions. If you want to find a Messier object, you press M (#7 on the keypad) and the number, enter and then goto. The computer gives you information of the object. It tells you what type of object (galaxy, planetary nebulae, diffuse nebula, globular star clusters, or open star clusters), quality of object from very poor to super (7 levels), magnitude and size in arc minutes. I really like the fact that if you are observing something in your eyepiece and your are unsure of the object, you can find out what it is by going into the Object Library, to Field and the press the Enter key. It will tell you how many objects are in your field of view and what is in the center based on parameters you set. It is set up for an LX200, f/10 scope. I’ve looked at more NGC objects in the last two months than I have in the previous 5 years of astronomy. The 102ed does a great job on globular clusters like 6811 but that is a different story. You can also use goto with CNGC and Star databases. Planets fall in the star category. If something you want to see is not in their database of 747 objects you can enter the RA and Dec. of the object. The computer also allows for a High Precision goto in which you first center a nearby star before it reaches the desired object.

I’ve owned the mount for about 10 weeks now and am just realizing its capabilities. The LXD650 has some terrific options. You can change the tracking rate depending on if you are viewing a star, planet, comet or whatever. Periodic error correction is trained on the system. I’ve just started training mine on a regular basis. It takes 8 minutes each training period but worth it. The just of it is that you find a star near zenith and really just move the RA to keep the target centered. It will record your movements and learn from it.

Of course I had to get a digital SLR camera so I can take semi-long exposure photos (up to 8 minutes with Olympus E-300). This is a work in progress. I’ve had a hard time keeping the mount steadily tracking unguided for 30 seconds. I didn’t have a problem tracking unguided with the GM8 for up to a minute or two but to be fair that did have a nice polar scope. I’m sure this will be improved upon over time. As stated previously there is an option for Refined Polar Alignment. I haven’t used this option yet, why I’m not sure. I guess there is another area of the manual I glossed over. I will use this option next time out with the mount.

There is one issue that has repeatedly occurred. After about three or four hours of steady tracking, the declination motor will stop working and I have to push the telescope to get the declination moving again. I’m guessing the balance is off a bit but I do make sure I balance the telescope with the camera attached prior to alignment. It also might be the lubricant used gets sticky from the humid Wisconsin nights and the gears get stuck. I won’t have to worry about humidity this fall and winter. When not in use the mount has been left outside in a screened in porch about half of the time I’ve had it. Hopefully it is something I can address and correct myself. I really don’t want to send it away to Meade and not be able to stargaze for a month or more. Usually when it occurs it’s time to quit anyway.

The mount was and is a bargain on the used market. I’ve only touched on a few of the things the computer is capable of doing. The goto is a performer. It almost always sets the object in the center of the eyepiece. The newer LXD55 was never this effective. Tracking has been good but so far limited for astrophotography – unguided that is and alignment done without Refined Polar Alignment or the drift method. The computer functions are advanced for a system originally built in the early ‘90’s. This is a good mount. Like the OTA it carries it is not to the level of the high end US, German and Japanese astro manufacturers. Then again neither is the price and in reality, it’s not meant to compete with them. Sadly the LXD650/750 mounts and 102/127/152ED scopes by Meade are discontinued. I hope Meade will introduce a new line of US built ED or fluorite scopes and updated GEMS. One thing about Meade, it may not be the best but you do get a good bang for the buck and that’s the truth.