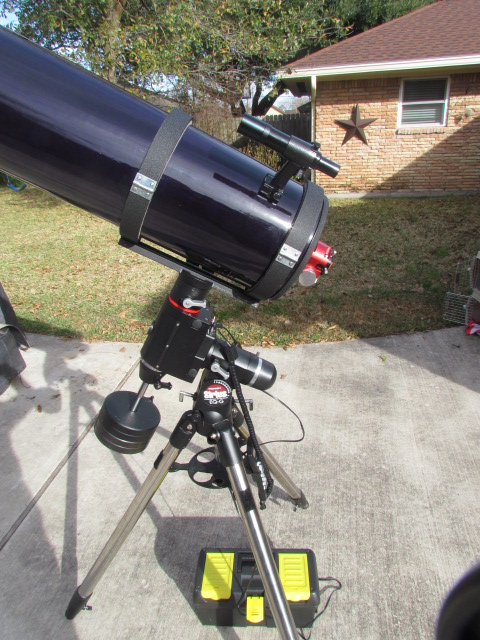 I have created a monster. I started on a project to build a 200mm classical Cassegrain telescope. It turned
out too heavy for the Orion SkyView Pro mount I had been using for the past four years, so I had to upgrade.

I had several options. The GM-8 with Gemini was a known quantity as I also use a G-11/ Gemini. I did not want to spend what a GM-8 would cost, and since this mount would be used as my quick look mount, I did not want to have to connect all those cables during set-up. I-Optron and Meade products are unknown territory to me. The Celestron AS-GT mount would have made a reasonable choice, but several friends have had bad experiences with Celestron support when they had trouble. That left the Orion Sirius mount. My ad on Astromart was answered shortly, and the Sirius was delivered by FedEx in almost less time than it took to place the ad.

With everything internal and contained, the Sirius is bigger than the SVP. Bigger than I thought it would be. It looks almost as big as the G-11. Even with as big as it looks, it is not so much heavier than the SVP (which is really light) that it will not do for my quick look mount. It is a pretty compact load, too, so it is pretty easy to carry. Of course, the counter weights make the mount heavier, but not any more bulky.

I like the look of the mount. Both motors and all of the wiring are enclosed within covers that look designed, rather than merely assembled. While the go-to kit for the SVP functions well, it does not look as good as the Sirius. The power, hand controller and auto-guider cables plug into the top of the mount. That makes it hard for the cords to get pulled out accidentally, but I do worry about one or the other getting caught on one of the clutch levers as the mount moves. It is great to have only two cords to plug in to be ready to observe.

The power cable connection has become dodgy lately. I am considering modifying the power connection so that there is a short pigtail attached to the mount head that ends in some kind of locking connector.

I have also noticed that the hand controller does not perform well in the cold. Since the brains are in the hand controller, if it does not work properly, then the mount is out of commission. I do not see that as being a big problem here on the Third Coast, but up north it could be. I have seen recommendations to use chemical hand/foot warmers, keeping the hand paddle in a pocket, etc. I may build a warmer from a dew heater.

I have always liked the slide-out counter weight bar of the Sirius and Atlas. One less thing to assemble during set-up.

I like that Orion includes a polar scope with the mount. Having a polar scope makes polar alignment so much easier than doing it without one. In my experience, the SynScan programming is not forgiving of poor polar alignment. I also like that the cover on the rear of the mount for the polar scope is threaded. I lost the push on cover for the SVP long ago. The front cover fits better than the front cover for the SVP, too. In his review of the Sirius mount for Astronomy magazine, Phil Harrington lamented the brightness of the LED illuminator for the polar scope. Orion have substantially fixed this by adding a dimmer function to the hand controller. I wish it would go even dimmer than it does, though. The user manual does not tell you where to look, but I believe dimming the polar scope illuminator can be accomplished in the Utility menu.

Instructions for dialing-in (centering) the polar finder are in the user manual. Once dialed-in, the polar finder makes polar alignment simple and fairly accurate using the Polaris clock position provided when you initialize the hand controller at the beginning of an observing session. Since you must rotate the mount head about the RA axis during polar alignment, either polar align before mounting the scope, or after balancing. The polar scope has a cross-hair for the north celestial pole and a small circle target for Polaris. When initializing the hand controller after turning on the power, one of the bits of information given is the Polaris clock position. If you rotate the mount in RA so that the Polaris target is in the clock position indicated on the hand controller, then adjust the mount using the altitude and azimuth adjustment screws so that Polaris is inside the target, you will be pointing at the NCP. If you set up your mount such that it is level (I use a spirit level on the spreader plate), you will also be pretty well polar aligned. The system works pretty well and tracking (obviously) as well as go-to pointing accuracy are much improved for your efforts. Also, with decent polar alignment, the 1-star alignment becomes serviceable.

The Sirius is capable of finding objects at 200x. Remember, you will have to use the backlash function in the Setup menu to get good pointing accuracy. The backlash adjustment function is how the SynScan controller keeps track of where the mount actually is as you move back-and-forth in RA and/or Dec trying to get your alignment star(s) centered. If you do not have the backlash function set properly, the error caused by slop in the gear trains will add up as you center alignment stars and your pointing model will be poor.

This being a Synta mount, I was concerned that the grease inside would be more like uncured glue. I was pleasantly surprised. Not only was the grease inside slick stuff that looked silicone based, but there are real bearings inside. I found three sealed roller bearings on both the RA and Dec axes as well as a taper-roller bearing for thrust. It is a big step up from the plastic washers used for thrust in the SVP. The method for adjusting the mesh between the worm and worm wheel is much better and less random than that used in the SVP. There is a push-pull pair of set screws that move the worm block closer or farther from the worm wheel. The three screws that secure the worm block do not, unlike the SVP change the position of the worm block when they are tightened. I only wish Synta had milled a keyway into the casting to ensure the worm carriers moved perpendicular to the worms. I think it would have made adjusting the worm mesh easier. During reassembly, I tweaked the mesh between various gears and the mount is smoother and quieter. There is still an annoying grinding sound when the mount starts slewing at the fastest speeds, but I mitigated that somewhat during cleaning/ reassembly.

Thanks to Astro-baby and her website www.astro-baby.com for documenting the ground work to disassemble and reassemble the mount. Her article saved me, and will save you, a ton of time.

The hand controller is superficially similar to the SVP hand controller. There are a couple of functions aimed at imagers that I will not address here since I am not an imager. Hopefully, that will outrage an imager that uses the Sirius and these functions will get written about. The initial set-up is the same: location, date, time, daylight savings time (or not), then begin alignment. The alignment procedures are the same as for the SVP.

I have the same gripes about this controller as I have with the SVP controller, they are both Synta after all. I really wish the controller had an internal clock, I hate it that I have to reset the date and time every time I turn the mount on. I wish that every alignment star was available at each step during the alignment process. After I make my first alignment, only some of the stars in the alignment star list are available for the second alignment star. I am sure the controller software is trying to limit my choices to ensure a successful alignment, but I want to be able to pick the star I want to pick. The various object lists are still not subdivided. However, by happenstance I found out that after you have completed an observation, you can push the Esc button on the controller twice to return to the position in the object list your were in previously. From there you can continue to scroll forward or backward through the list using the scroll keys at the bottom of the controller. I still wish the lists were subdivided. By trial and error I also found out that once the mount has slewed to an object you select, you can use the scroll buttons at the bottom of the hand controller to see information about the object. The information is not really very good, in my opinion, but Orion could improve upon it easily. I wish I could go-to a specific RA/ Dec coordinate rather than displaying the current coordinates and then slewing where I would rather be. That is the point of go-to, right? One other gripe I had recently. One night the mount quit working. The previous week it operated well, but on this night it would not execute a go-to, nor would it move manually when I used the individual direction buttons. Orion tech-support suggested that I update the hand controller firmware. I was skeptical, but it worked like a charm. My gripe? Why would old firmware suddenly prevent the mount from operating?

So, with all this, does the Sirius do what I had hoped? Yes, it does. Once balanced, the mount carries my homemade Cassegrain quite well, no clicking when tracking like I experienced with the SkyView Pro. Using the go-to function, the mount can find objects at 200x magnification. For visual observations, it tracks well. It runs well off a small 7 Ah battery I keep for quick looks. I can carry it outside assembled and it only takes connection of two cables (power and hand controller) to be ready to go.