Give Your Losmandy a Lift

[ARTICLEIMGR="1"]I love my Losmandy GM-8--but with a 5" f/9 refractor on it, objects high in the sky require a bit too much bending, twisting, and lying on the ground to use--even with the GM-8's tripod legs fully extended. The obvious solution is the Losmandy Tripod Extension 12" Lift.

The exterior finish is what you would expect from Losmandy--finely finished, flat black. (As my wife has noticed, the last thing you want a telescope to be is black--too easy to trip over in the dark.) The interior, while reasonably well-finished, reminds you that this is welded together from other parts, but everything is still reasonably finished inside.

If you are used to getting down almost on the ground, a 12" lift doesn't sound like much, but in fact, it was sufficient to get my 5" f/9 refractor to a position that I can stand for most objects, and even looking at objects at the zenith, I can sit comfortably in a chair, instead of getting grass stains (or worse) on the seat of my pants. While purely an esthetic matter, the telescope just looks so much more like a telescope sitting another foot in the air--very cool. 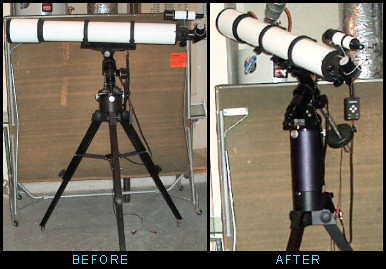 Here you can see the before and after:

The extension adds a few pounds of weight to the mount, but more importantly, it raises the center of gravity of the telescope and mount combination several inches. If you have a very heavy telescope, you need to be aware that your mount may be a little more prone to tip over if you get it much off of the vertical. I have not had any problem with my telescope, and I suspect that if you do have such a problem, you are probably putting too much weight on the GM-8 mount, but think about it the first few times you decide to put this combination anywhere but on the level. Especially if you have some need to use two extensions end to end, this might be a real problem.

The screws that come with the extension are hex head, and are I believe identical to the standard screws that hold the GM-8 head to the standard tripod. My mount came with the optional thumb screws, and I would encourage anyone who ordering the extension to consider ordering the optional thumb screws. They are much easier to manipulate in the dark.

This extension apparently works with the G-11 and HGM tripods, but I have not tested those other tripods.
Comments (0)