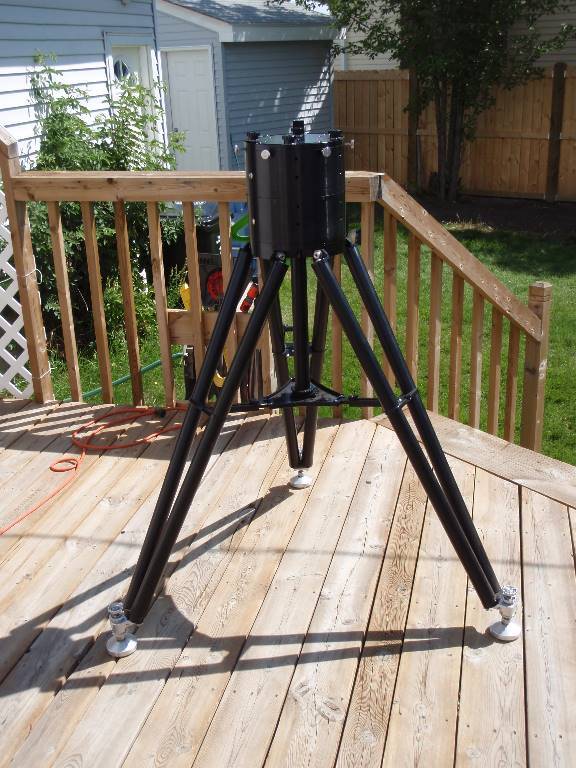 I'm back with part 2 of my review / description of Rob Miller's wonderful tripods and accessories. Part 1 concentrated on the TRI36L, the lightest version of this tripod family and how it operates. This commentary will concentrate a bit more on the accessories available for these superb tripods and will showcase a little bit about the medium duty version, the TRI36M.


First off, if you haven’t read part 1 of the review, I suggest you do so. Why? Well, because I am not going into any sort of detail of the operation of the tripod itself. All three versions, the L)ight, M)edium and H)eavy are basically identical with the exception of the size of the hardware they are built from and with. In other words, if you know how the TRI36L sets up, you know exactly how the TRI36H sets up. The operation is identical. The differences are in the physical size and weight of each mount, the options for mounting, and thereby the carrying capacities.

Here are a couple of pics of the TRI36M. One is just the tripod sitting alone and ready for use with an AP900 mount. The second shows it loaded up with the mount, extensions, plates, rings, scope, guidescope, cameras, and just enough wiring to give one a bit of a headache when tracing back something not quite connecting properly. Once it is set up and operating, it is a dream to use and the TRI36M tripod is the base which holds it all with aplomb.

As mentioned in the previous review, the TRI36L weighs under 10 pounds, a total lightweight, and yet is rigid and more than sufficient for a few hundred pounds of equipment. I wanted to have two rigs to use since there really isn’t a lot to do once the imaging scope is up and running. I decided on getting a TRI36M very quickly after receiving the TRI36L and seeing for myself how excellent it really was. I felt the heavier tripod would be better suited to my larger telescopes yet would still be very lightweight and most importantly, Rob wasn’t offering a mounting surface for the TRI36L which would accommodate my AP900! The TRI36M currently has several options available for mounting an AP900, AP1200, Bisque MX, or a Mach1GTO via an AP adapter. More options may be available by request. So the next question is how much more does the TRI36M weigh? Not much! It comes in at well under 14 pounds in the base state. Adding optional leveling feet or pier extensions will raise this by a pound or two, but it is still incredibly light yet incredibly strong and stable.

One option I knew I would require is a "pillar" or "pier" portion to get the long refractor assembly and camera up away from the tripod legs, otherwise I was going to severely limit the amount of sky I could "see". I ordered two of the four inch extensions with the thought of adding another one if these two did not give me the required leg clearance. They are shown in the next series of photos being added to the tripod.

The process is relatively simple in that the six stainless steel grub screws holding the rotating top plate are removed. The central pivot is removed via three small hex bolts, under which is a shoulder bolt holding the top plate down. Once this bolt is removed, the top plate lifts off. I threaded the shoulder bolt back in place and tightened it just enough so that it would not fall out inadvertently, and I would not lose it were I to remove the extensions for any reason. The AP pivot must be replaced in the top plate for the AP900 mount, and is re-attached using the original three small hex bolts. I suggest doing this as soon as possible in order to minimize the inadvertent misplacement of these small bolts. Once this is complete, set the extension in place and replace the original stainless grub screws with standard steel grub screws provided for this purpose, loosely threaded in to position.

Note the small curved cut-outs on the extension which are marked with a small index mark just above each. These grooves are where the grub screws are going to sit to hold and lock the extension, and the index marks make it easy to rotate the extension to the proper position to ensure the proper placement. Once the extension is in place you can drop the top plate into position or add up to two more extensions first. I have two so the next extension is attached in exactly the same manner to the top of the previous extension. Once the two extensions were in place, I placed the top plate back on the 'pier' so formed and re-inserted the stainless steel grub screws to hold it in place.

One modification readers will note is that I have replaced all six of the stainless grub screws attaching the rotating top plate with stainless thumbscrews. This allows me to easily release the top plate and rotate it to the position I want. This feature is designed into the tripod and would ordinarily be done via releasing of the grub screws with a proper sized Allen wrench. Since the top plate is not held in place by the central shoulder bolt any longer, the user should ensure that his telescope mount is very well balanced on top of the pier. While it is highly unlikely that it could pop loose due to the method the top plate fits down into and is held by the stainless setscrews, or, in my case, the thumbscrews, it could conceivably tilt and jam were the thumb or grub screws released sufficiently to allow it to do so.

One of the very best accessories, in my opinion, are the three leveling feet. A set of three of the regular version will set you back around $200 at this time. A set of three of the heavy duty version are around $270 if I recall properly. Initially I had two sets of the regular version, one on each of the tripods. I found them to be perfect on the light TRI36L tripod but they were a little more difficult to handle on the medium tripod once it was loaded down with well over 120 pounds of gear. Rob soon made a set of heavy duty leveling feet and I swapped them out without hesitation for use on the TRI36M. Here is a picture of both the TRI36L with the regular feet and the TRI36M with the heavy duty version. Although they look very similar, the heavy duty version features a thicker shaft with finer threading reducing the torque required to turn it, and larger knob size for easier gripping and increased torque. While they are not absolutely necessary, I cannot emphasize how much a set of leveling feet will improve the ease of use of the tripod and the resulting pleasure of ownership.

One of the other items Rob has designed for the tripod is a set of extension plates which clip on to the central tray forming the locking portion of the leg spreader assembly. There are three plates in a set and one piece of each just clips on the corresponding concave portion of the main tray. There is a curved slot on the extension which matches a curved ridge on the exterior boundary of the tray. The extension plate literally drops into position and is surprisingly difficult to dislodge accidentally, yet will lift straight out very easily.

A few of the pictures here show stainless shoulder bolts sticking out the side of the extensions at random places. Yes the positions appear to be random but I put the bolts there on purpose as places to hang or tie off cables, hand controllers, and what have you. They are simply 5/16 – 18 bolts threaded in to pre-threaded holes into the sides of the extensions up to the non-threaded portion of the bolt shaft and lightly tightened so that they do not loosen accidentally or vibrate out in transport.

Overall, I am extremely pleased with my two Rob Miller tripods. They are relatively inexpensive when one considers the quality of construction. They are extremely lightweight, yet superbly made, and incredible performers. Rob has mentioned several times that he will have some web pages up 'real soon now', and I expect this will happen "soon". For now, he has been placing sponsor ads on Astromart and is listed in the sponsor section. You can contact him at robmiller1950@comcast.net at the present time (Feb 2012).


There have been rumblings of a few other accessory pieces available or soon to be available as well. I will be sure to keep an eye out for anything interesting and useful to the way I use the tripods.