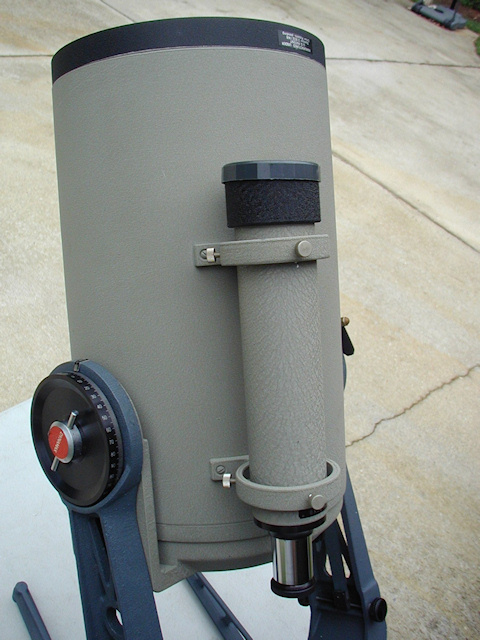 Let me say from the outset that all 4 of these scopes have had good mechanics. I am a visual oberver and every Dynamax 8 and the B&L 4" have had excellent tracking. No noise, no jumping images from tracking errors, smooth movement in dec and RA.Only one of them had some image shift. I have seen comments on the internet that these scopes were "poorly engineered". The Criterion Golden Pyramid tripod has served me well on all scopes and I like the built in bubble level.

The fork mounts are not wobbly. The bakelite covered cardboard tubes are very durable. I have found it very easy to use the setting circles with these scopes. 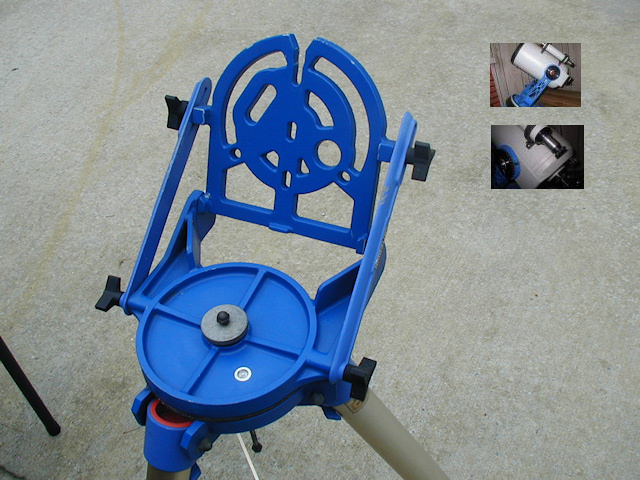 The most important thing I have to say about the optics concern the 1979 model. I will first tell you about the 1981 model. I had this one first and was new to the world of Cats and collimation. I used the scope for a few years after screwing up the collimation myself and not realizing how important it was. I sent it back to Criterion and a guy named

Gilbert Violet said he would find out why it was not performing and make it work for me. It came back and I could not believe my eyes.This was back in 81 when Criterion was still in business. The double double in Lyra was incredible and my views of Jupiter and deep sky stuff the same. I used this scope to do my Messier list and the Hershel 400 list. Then like all people in this hobbly I got Dob fever and sold this scope. It had wonderful optics.

About a year ago I picked up a 1976 model Dynamax 8 on A-mart. This scope has optics that can only be described as astonishing. Jupiters red spot looks like the atmospheric storm it is . Not just a spot. I have seen shades of white, orange, red, and brown in it. I have seen fantastic views of the belts.Stars are the tiniest of pinpricks with great contrast. Textbook star images.

Now the 1979 model. When I bought this on a-Mart a few years ago I was disappointed in the optics. I did google searches to seek help in fixing it. I could not seem to get it collimated no matter how hard I tried. I read something from Michael Hart on Mapug astronomy that really helped.
He said that the consistency in the manufacturing process was pretty good and that the difference between a great scope and a lesser scope have to do with final assembly. Things like corrector orientation, centering of the secondary, etc. Before I took off the retaining ring that secures the corrector plate I determined from caliphers that the secondary was off by .5mm in an east and south direction. I took off the ring and before I centered the secondary I rotated the correcting plate with secondary from the factory tick mark position at 7 o'clock to 2 o'clock. I then recentered the corrector to a rough centering. I put the retaining ring on to line up with the holes for the screws and kept measuring and moving until I had the secondary perfectly centered. As it turns out the perfect center position was 70 millimeters from any direction of the retaining ring edge to the edge of the secondary holder. I had used new cork pieces to secure the corrector in the new position at center and put the retaining ring back on with the screws.

I then roughly recollimated by looking through the back of the scope toward the secondary and observed the "doughnut". I adjusted the collimation screws to get it close to a perfect looking doughnut. That night I went out and set up. I was blessed with a good seeing night. Even before collimating when I looked into the eyepiece I knew I had done well. I carefully recollimated and got it perfect down to a 6mm eyepiece. I looked at Saturn and my mouth fell open in disbelief. Incredible details and whereas before I could go no lower than an 18mm eyepiece without the image blowing up I could get great views at 10 and 6mm. I observed bright stars and put the power to it and had fantastic diffraction patterns. The scope maintained perfect collimation on both sides of focus.

Be wary of bandwagon trashing of certain scopes. Take everything with a grain of salt. 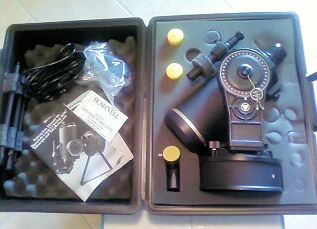 My 1983 B&L 4" has fine optics and outperformed a Meade 2045 in a side by side comparison. Both 4 " scopes. The difference was in the coatings. The B&L had better coatings.More extension on M42. Syrtis Major showed better in the B&L as well as a polar cap. Star clusters were brighter and sharper in the B&L than the Meade 4".