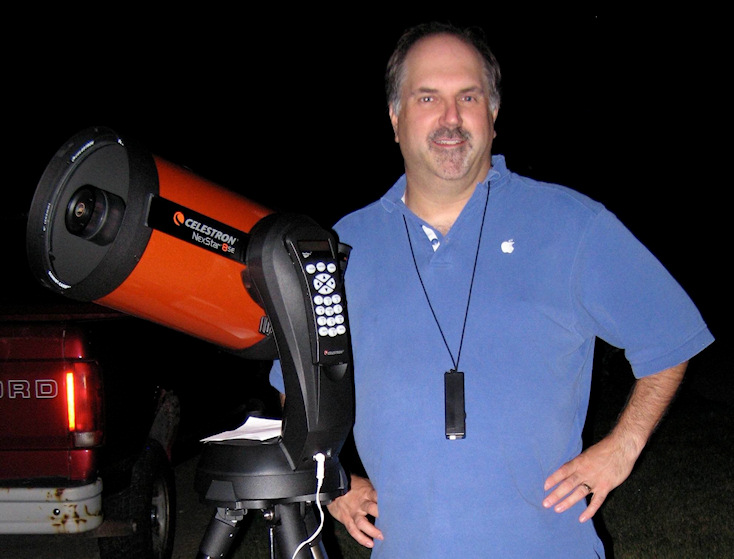 I'm watching ancient John Wayne movies on cable with my father-in-law, flipping through the pages of the latest Sky & Telescope magazine during commercials. I'm grumbling about the positively awful night of frustration I had trying to get my big 12" Meade LX200GPS setup and running. I couldn't even get the *focuser* to operate. Just then, I noticed a caption on a picture in the magazine: "Sunspots are back in Season!". I literally jumped up out of my chair, and within 10 minutes I had my original generation NexStar 4 setup with an Eq-wedge, solar tracking and was viewing sunspots. My father-in-law stood in the garage door opening shaking his head and, pointing at the 12" Meade: "You gotta sell that..." and then, pointing at my NexStar 4, "...and get a bigger version of that". He's the outdoorsman type of guy, and didn't know alot about telescopes, but even to him, it was painfully obvious what my course of action should be. I don't know the AutoStarII software as well as the NexStar stuff, and the Meade was heavy and bulky enough to keep me from getting it out much (contributing to my incompetence on AutoStarII).

I've sold the Meade, and taken the money to buy a new Celestron NexStar 8SE, a Celestron hard case, solar filter and dew shield. The night was warm, super-clear, and even in light-polluted southeastern Michigan, it was clear that it was a great night to try out my new scope right there in my driveway.

Setup was exactly like my smaller NexStar 4...simply level the tripod and use the 3 thumbscrews to fasten the mount to the tripod. I might note that the bubble level that Celestron provides is a thoughtful inclusion, but they might have spent more than 10 cents in a bubble level. I used a simple $2 level I found at Lowe's.

The NexStar 8SE has a longer optical tube than the 4", so you have to loosen the slide-mount (with another grab-type screw) and slide the optical tube forward, so that the diagonal will clear the mount when you view overhead objects. This is the major setup difference between the 8 and the 4--the 4" doesn't require you to move the tube at all.

Celestron now has a vastly superior "twist-lock" lens cover, as opposed to the friction-based felt tabs that my 4" used. The StarPointer laser finder is identical to the laser finder on my 4", and as before, I needed to adjust it to center the dot once the scope was online.

The NexStar 8SE uses either 8 AA batteries, or an AC adapter...I was setup on the end of my driveway, so an extension cord was all I really needed. The battery compartment is easily accessible and below the optical tube assembly in the mount. I recommend loading your batteries after getting the telescope mounted, for its pretty tippy and unstable sitting on its own.

Magic time arrives...I switch on the 8SE for the first time, and it asks me for the normal stuff like date, time and location. This new generation of NexStar software has more locations in it...including my city! This is more fun than loading the lat/long coordinates.

The NexStar SE series now has three different ways to align your scope to the sky: 1-star, 2-star and 3-object. 2-star is what the old NexStar 4 used, so I skipped that option. 1-star alignment will give you a single bright star to locate on and it would figure out the rest. I skipped 1-star too, as I wanted to try out the new 3-object alignment. In this mode, YOU get to pick which objects in the sky you will align to--any 3 bright objects will do, including planets and the moon! Celestron recommends that at least one of the objects be in an opposite direction from one or more of the others, so that it gets a more accurate location. In my location, this is also a good mode to use, since I live in a heavily wooded area, and trees often obstruct objects in the northern sky.

Alignment went quick and easy and I was off and running!

Celestron's NexStar software was designed to be intuitive to use, which is important for more casual users such as myself. For example, the arrow keys ALWAYS slew the scope; the Undo key ALWAYS backs up one step, whether that might be a number, or a whole menu. All of the keys have multiple labels on them so that you can just look at the controller and figure it out. I've barely read the instruction manual for this handset, its that easy to use. This was one of my biggest irritations with the Meade AutoStarII software: each menu seems to have been designed by a different team, and operates inconsistently.

My first view was of the Moon, since it was a prominent, bright object to make all of the initial first-light adjustments and get used to everything. I was stunned at how crisp the images were. Celestron now ships with E-Lux Plossl 25mm eyepieces, which are superior to their old SMA standby. With rubber eyecups, they help block out some of the neighbors' yard lights.

I spent the night looking at Messier objects, bright and faint, and I was not disappointed. Even in heavily light-polluted southeast Michigan, I was able to see my first glimpses of Uranus and Neptune--with the help of NexStar's Goto feature. Formerly invisible nebulas like M8 (Lagoon Nebula) were obvious to pick out. I'm sure part of it was the extraordinarily calm and clear night, but the 8" size was what I was hoping it would be, having stepped down from the 12" monster. Equally important, was the ability to zoom in on Jupiter whereas the 4" would reach its limits quickly, the 8SE gave me the ability to zoom in and satisfy my curiosity before the image degraded.

After packing up for the night at a drowsy 1am, I came away completely pleased with my purchase. Celestron delivers an amazing value in a fully computerized Go-To telescope. Its combination of generous aperture and easy, intuitive handset software melded into a highly portable 25 pound package for only $1199. 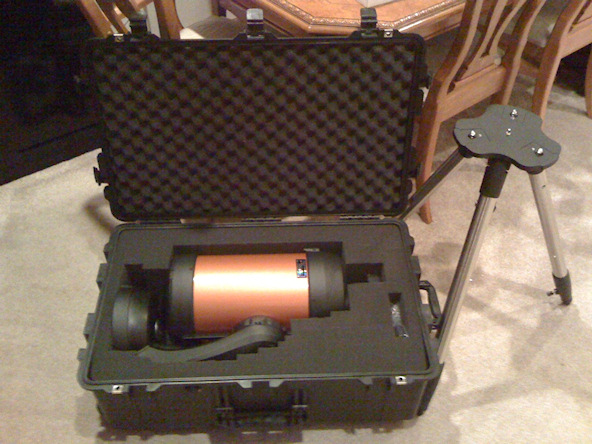 I purchased the Celestron heavy-duty hard case for my NexStar 8SE (#302070) for only $350. Its basically a Celestron-badged Pelican hard case, but that’s a “good” thing. It’s billed as “unbreakable, watertight, dustproof, chemical resistant and corrosion proof” and I don’t think they’re exaggerating. This thing has a rubber o-ring built into the lid, handles on 3 sides, ABS latches, wheels and even a slide-out pull-handle. The only downside is that its one of those “universal” cases, with the die-cut foam that you have to pull out. I pulled out foam to get a secure fit, but when pulling my telescope out, it pulls out both halves of the foam, so it seems you have to reach a compromise between snug, secure fit and convenience. I’m reaching for a little duct tape for those halves...

I also purchased the Celestron solar filter and an AstroZap dew sheild. One note with dew shields and the NexStar 8SE: because the sliding mount bar goes the length of the tube, your dew shield will need a cutout for the bar. The AstroZap AZ-118 is the only flexible dew shield I’ve found for the Celestron NexStar 8SE with a notch. It costs the same as the AZ-107 (without a notch), so there’s no penalty. I like AstroZap’s flexible shields because they’re really top-quality shields: ABS plastic, stitched velcro, felt lined and with a grippy rubber strip to grip your scope tube. For $36, its an absolute bargain.

Finally, I highly recommend working with your local resellers. Mine, Rider’s Hobby Shops, were able to be very competitive in pricing and worked with me to find the equipment I needed at the best price I could find through them or the internet. I’ve worked through them for years and they’ve always backed what they’ve sold me.

So, my father-in-law was right on target and proved the old adage: the best telescope is the telescope you can use.