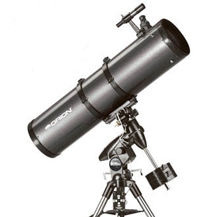 [ARTICLEIMGL="1"]Not having previously owned a serious telescope, I was excited to be purchasing my first, however, not wanting to waste my money, I was concerned about buying a piece of equipment that met the criteria I felt were most important. After a great deal of searching, it became clear that an Orion Skyview Pro 8 EQ most closely met my criteria of size, range of capabilities, and cost. With all of these in mind, I purchased it and eagerly awaited its arrival; a week later, the scope arrived on my doorstep, and I began to explore this astronomical tool.

With the help of the assembly instructions, I began to piece together the mount. Some portions of the instructions were unclear, and the descriptions relied heavily on a single picture of the completely assembled telescope and mount, rather than on specific areas of the subassemblies. Luckily, the pieces only really seemed to fit together one way, so it was difficult to make any serious mistakes. The counterweight shaft had a slightly oily film on it at first that caused the counterweights to slip if they were placed within fifteen degrees of vertical, but that was easily removed and has not been a problem since. Along with the telescope I ordered dual axis drives and installing them was relatively easy. The right ascension axis motor is housed in a small box on the side of the mount, but the declination axis motor mounts near the telescope tube and is completely exposed. I will have to take particular care to keep these gears clean and dry.

After assembling the mount I added the optical tube and installed the finder scope and its mount. The right ascension and declination axes move smoothly and freely, but have sufficient friction to keep the telescope steady even without the locks engaged. Included as standard equipment with the telescope are a 2” rack and pinion focuser with a 2” to 1.25” eyepiece converter rather than the cheaper 1.25” focuser that comes on many less expensive models. Unfortunately, the finder is quite small, at only 6x30. As with many new telescopes, the Orion Skyview Pro 8 EQ includes 25mm and 10mm Plossl eyepieces. After completing a rough collimation of the scope using the included collimation cap, I waited for a clear night to observe.

After a week of twiddling my thumbs, I was finally able to take my new telescope out for its maiden voyage. Setting up the mount and telescope and getting a proper polar alignment were not difficult, taking only about thirty minutes the first time with the help of the optional polar alignment scope. I then aligned the finder on a distant radio tower and finished collimating the optics using a bright star. Including the initial setup and polar alignment, getting the scope ready that first night took about an hour, with no prior experience and nobody to assist me. This process was much easier and faster than I had expected, honestly.

After the initial setup was complete, Jupiter presented itself as the obvious choice for my first observational target. The image of the planet was dazzlingly bright and unexpectedly clear, in spite of my relatively poor viewing conditions. The mount was quite steady, and the image stayed centered with the help of the drives. Using a Barlow lens along with the 10mm eyepiece allowed me to see the moons of Jupiter as small, featureless disks rather than as points of light, and I was able to see some detail of the cloud bands on the planet. I was very pleased at the performance of the telescope in this regard, and I look forward to observing the rings of Saturn later in the summer and fall.

As it approached the horizon, I used Jupiter to calibrate the setting circles that come on the scope and went in search of my next target. At this point, some small but annoying problems with this piece of equipment began presenting themselves. Using the setting circles to get a rough position for it, I found that the object was difficult to locate because the finder was too small to use for any but the brightest stars and planets in my light polluted area. It simply does not have the light gathering capacity to be used to find targets that cannot easily be visually observed. Upgrading this to an 8x50 finder is going to be one of my first improvements to this telescope.

Having given up on the finder for a specific location, I decided to attempt to find the galaxy using the main scope at low magnification. Using the manual slow motion controls to move about the target area led to the discovery of three other problems. First, the setting circles on this mount are small and do not move when the slow motion controls are used. Because of their lack of movement, they must be recalibrated every time you wish to view a new target or they could be off by several degrees. They are also only about four and a half inches in diameter, too small to give much more than a general direction to point the scope. Larger and more easily used setting circles will definitely be another early improvement to this scope. I also discovered that there are spots on the mount particularly in the areas of the declination axis drive, the axis locks, and the slow motion controls, that present serious crowding. There are positions in which it is impossible to lock the telescope’s axes completely, or to unlock them if they are already locked. It is something of an annoyance, but it does not create any great hardships for the observer.

The other issue that I found is more significant and unfortunately is entirely unexpected. The telescope’s knobs, particularly the slow motion controls, are plastic and are extremely poorly made. After only three hours of use, one of my slow motion control knobs separated from the small metal collet that it contains. It frequently comes loose or stops gripping the shaft as a result and as a result is nearly worthless at times and is extraordinarily frustrating. The focuser knobs appear to be somewhat sturdier and are held on by screws instead of only by friction; however, although they are reasonably large and allow good control of the focus, they are made of plastic that is viciously sharp and hurts your fingers after a short time. The third simple improvement that I will be making to this mount will definitely be securely attached metal knobs with beveled edges for the slow motion controls and focuser.

While there may be some minor issues with the integrity of the mount, Orion does appear to have high quality customer support. A call to their 1-800 customer support number ended in a new knob sent to me immediately, and questions about the setting circles were answered with a thorough email that included suggestions for improving their performance. Both the customer support and technical support staff were courteous and seemed to genuinely care whether they had answered my questions properly.

It may sound as though I am unhappy with the quality of this telescope, particularly the mount, which is unfortunate. Plainly put, I am not disappointed at all, nor am I overjoyed. This telescope is exactly what I expected, and I am reasonably pleased with its performance. Orion makes this, and all of its telescopes, available to amateurs at low prices and allows us to own a piece of equipment that we otherwise could not afford if we were forced to purchase an equivalent model from a manufacturer like Meade or Celestron. Orion puts their money into the places that matter, like decent optics and a reasonably steady mount. They save money on everything else, including things like annoyingly cheap plastic knobs and small finders.

Anyone buying this particular telescope or another in its price range should keep that thought in mind when dealing with these minor difficulties. You are not purchasing a high-end piece of astronomical viewing equipment; you are purchasing an affordable telescope that has had some corners cut in areas that are not absolutely essential to performance. This telescope could easily be used right out of the box as it is shipped, but with a few small and inexpensive improvements, its ease of use could be increased significantly. As long as your expectations are kept reasonable, you should be more than happy to own an Orion Skyview Pro 8 EQ.