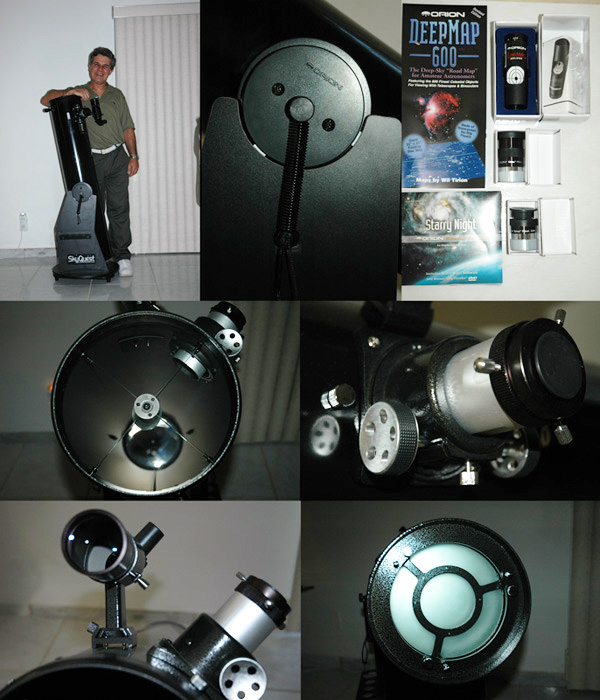 Here is a brief review of a scope that I consider a bargain, and great starter for anyone interested in Astronomy. It has enough aperture to satisfy even the “experts”, and you can set it up in “literally” 2 minutes.

I received this scope as a gift from Orion, for getting 2nd place on their Starshoot Imaging contest. And, after testing it last night, I decided that it is definitely a keeper. Its ease of setup & use makes it a perfect scope for those times in which you don’t have much free time, but still, you want to have a quick glimpse of what is “up there”…

For $299 you get a lot of accessories included with the telescope…
In the package you get Orion’s Deluxe laser collimator, which makes this tedious process a breeze (great news!), 2 eyepieces (very decent ones indeed), a 25mm Orion Plossl and a 10mm Orion Plossl, an Orion celestial folding map (DeepMap 600), and Orion’s limited version of Starry Night.

The scope’s focuser has been upgraded by Orion, and now they deliver it with a Crayford style focuser, instead of the rack & pinion that they used to ship it with, making it a much better set up. It is smooth & rock steady…
No more flimsy feeling at the focuser when you load you heavy eyepieces.

The primary mirror assembly is pretty nice & wide open, allowing plenty of air flow to cool down the mirror, for faster temperature adjustment.

The Finderscope included with this scope is a nice 9x50, right angle, correct view, which helps a lot in finding objects & centering them in your main scope. (once aligned, of course)

As far as size goes, well, I’m a 5’ 7” guy, so you can see in the picture that this scope is not a small one (or is it maybe that I’m the small one?). I have been able to put this scope in the backseat of my compact car (Toyota Yaris), so I can’t see anybody having any issues as far as traveling goes. This scope (tube & base separated) can be carried by one person and can fit inside ANY car.

I took it for a spin last night, and observed some Open Clusters, Globular Clusters, Jupiter, The Moon, and all of them were breathtaking (as it should be). On Jupiter I pushed the magnification to 266x (with a 2x barlow and a 9mm Nagler) and there was NO image breakdown. Jupiter showed beautiful detail, with lots of cloud bands, and a GRS (Great Red Spot) creeping on the limb. (in theory, you should be able to push to up 400x magnification, on a very steady night)

All in all, a great scope, and one that should definitely be considered by anyone thinking about jumping on the Astronomy Bandwagon… you will not be disappointed by it!

Clear skies to all!