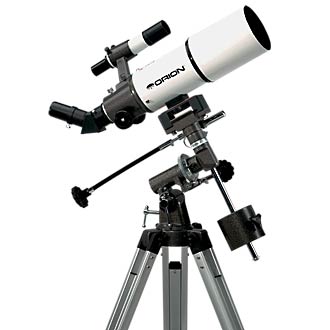 You hear it all the time from novices at the local astronomy club and online in the Forums: “I want a telescope. What can I get for less than 400 dollars?”

In the past, my inclination has been to reply, “Get yourself a nice pair of binoculars. You simply CAN’T get a good scope for 400 dollars.” But is that still true? It turns out, surprisingly, that it’s not. Not anymore. Things have changed a lot since the 1960s when I was a novice amateur. The dollar has shrunk wildly, but the astronomy market has simply exploded. There are more sellers, more buyers and a far larger selection of equipment is on offer. But what’s really helped Jane and Joe Novice Amateur is the entry of Mainland China into the astronomy biz.

The Chinese equipment story started with Orion’s (a.k.a. “Telescope and Binocular Center”) initial importation of the famed Short Tube 80 80mm f/5 refractor in the 1990s. This was such a huge success that the maker, Mainland China’s Synta, and other firms in China and Taiwan began exporting an ever-wider variety of inexpensive astronomy equipment of good quality.

Are there any reasons we shouldn’t welcome this influx of scopes? Well, to some extent, the proliferation of inexpensive equipment tends to drive out better quality mid-priced gear (cheap imported scopes have little effect on the high-end market). Also, some folks question whether we should be supporting an undeniably repressive regime with our dollars, something that can be argued either way for hours. Finally, while the quality of far-eastern gear can be surprisingly good, it is not, as yet, equal to that of Japanese, U.S. or European equipment. Quality varies at times. If you’re purchasing Chinese, you want a good dealer, so you can return/exchange easily if necessary.

Even with the above caveats, it is overwhelmingly obvious that these imported scopes are a boon for the newbie; especially the young person with a lot of enthusiasm, but without a lot of money to invest. Chinese equipment allows new amateurs to actually get out and see a lot from the beginning. If you’re of my generation, you probably spent years wishing and pining for an out-of-reach expensive 6 inch Newtonian.

I knew all this, of course, that there are some amazing telescope bargains out there. But exactly what does your 400 dollars (or less) buy you right now? Let’s take a walk through the online showroom of my dealer of choice, Anacortes Telescope and Wild Bird http://www.buytelescopes.com. What can we come up with in about 15 minutes of looking? Let’s start with Anacortes’ Orion pages, since Orion is one of the two concerns currently importing Synta gear into the U.S., and Synta scopes are known for their good quality, relatively speaking, and their low prices.

Let’s see…a click-click here, a click-click there and we come to the Orion SkyQuest XT6 IntelliScope 6 inch dobsonian for $359.00. This dob, which been around in a couple of slightly different forms for the last several years, has a good record of pleasing novices, and has enough aperture to keep many amateurs satisfied for a lifetime. Accessory wise, the scope comes with a couple of very useable plossl eyepieces, a decent star atlas program on CD, and more. You can even add a digital setting circle computer for an additional $149.00. Not only is this scope all many amateurs will ever need, it is an almost unbelievable value compared to what your 40 dollars would have bought you in 1965 (the equivalent value of 359 bucks in 1965 money). Take it from somebody who was there, 40 dollars would NOT get you a good 6 inch reflector in ’65.

By “400” do we actually mean “way less than 400 dollars”? If so, take a look at the Orion StarBlast. This is a 4.5 inch dobsonian-mounted reflector on a single arm mount that sells for a grand total of $169.00 with two eyepieces. How much can you expect a scope that goes for a hundred and sixty-nine 2004 George Washingtons to show you? In this case, a lot. I’ve got a StarBlast myself, and it is easily capable of presenting detailed images of the Moon and planets, details in the brighter Messiers, and at least revealing countless other deep sky objects. The only criticism of this fine little scope is that it’s only a couple of feet tall on its small base. You’ll need something to perch it on. But since you’re only digging 169 greenbacks out of wallet or purse, you can afford to buy a 5 gallon paint bucket from Home Depot to elevate this small wonder to a height suitable for practical observing for adults. Orion pushes this as a “kids’ scope,” but it is really a scope for anyone wanting a powerful and portable performer.

What if you ain’t a dob fan, though? There is something to be said for an equatorial mount, after all. Another option found on the Anacortes Orion pages is the is the Starmax 102 EQ, a 4 inch Maksutov Cassegrain Telescope (MCT) that goes for $369.00 on Orion’s equivalent of the Synta EQ2 mount. Every one of these little maks I’ve seen has had outstanding optics. In addition to the mount and scope, Orion throws in good plossl eyepiece from its Sirius line, a carrying case for the tube, and a 90-degree star diagonal. A drive to motorize the mount is available for a reasonable extra charge.

Of course there still is--and I hope always will be--the Short Tube 80, a classic wide field scope that WORKS on a the same small equatorial mount used by the Starmax MCT for a total of $279.00. What more can you say? The Short Tube 80 achromatic refractor is a modern classic. It provides stunning wide-field views from dark sites (I’ve never had a better look at the North America Nebula than the one the ST 80 recently gave me), makes a decent imaging scope piggybacked on a larger instrument, and provides reasonable views of the Moon and planets (though planetary viewing is certainly not the forte’ of any f/5 achromat).

As mentioned earlier, Orion is one of the two U.S. companies importing Synta gear at this time. Point and click over to “Celestron” and you’ll find the C4R 4 inch refractor on an EQ3 mount for $398.95. This is a medium focal length f/10 achromatic refractor that can do a good job on the Moon and planets (albeit with some false color) and provide a decently wide field for deep sky viewing, too. No, the mount ain’t the Rock of Gibraltar when you put a semi-long refractor on it, but it’s definitely good enough to provide much pleasant viewing. Again, a positive steal. If somebody had told me that I could buy a 4 inch refractor for this price 40 years ago, one with optics of proven quality, I simply wouldn’t have believed them. Not only is the price good, a 4 inch achromat can take any observer a long way. Remember, most, if not all, of John Mallas’ observations for his and Evereid Kreimer’s famous The Messier Album book were done with a 4 inch refractor.

Synta and China aren’t the only games in town, either. The U.S. manufacturer, Meade, doesn’t just sell big SCTs, they’ve got a line of lower priced telescopes of various designs that hit that magic “under 400” price point too. My choice of these is their 70mm ETX 70 refractor. It’s a short focal length achromat, and is best at wide field views of the deep sky, but it can also do for casual lunar viewing. The ETX 70 is a real cutie that can please even an experienced amateur as a second (or third) grab ‘n go instrument. Its $279.00 price, believe it or not, includes an Autostar computer and goto pointing—which works superbly well. This little goto refractor has become my instrument of choice for those long summer nights at the beach down here on the Redneck Riviera!

And on and on and on. I’ve just scratched the surface of the quality scopes available in the 400 and less range. I'm amazed! I could hardly believe, once I really started checking, what 400 simoleons will buy a novice! Dang! One of these telescopes, a pair of Simmons’ wide field 10x50 binoculars (less than $40.00 at Wal-Mart and other discount houses), a copy of the Cartes du Ciel star charting program to print sky maps (free), and maybe a planisphere or a copy of Orion's Deepmap 600 (less than 15 bucks) and Joe and Jane Newamateur will be ready to ROCK--I mean it!

None of these scopes are anything advanced amateurs will salivate over, BUT...any of these scopes will please a novice in spades, and will be far, far better than what I started out with in 1965, a Tasco 3" reflector on a shaky alt-azimuth mount. And that silly little bitty thing opened up the whole, beautiful universe to my wondering eyes.

Click here for more about the Orion StarMax 102 EQ
. -Ed.

Click here for more about the Celestron C4 R. -Ed.

Click here for more about the Meade ETX-70AT
. -Ed.