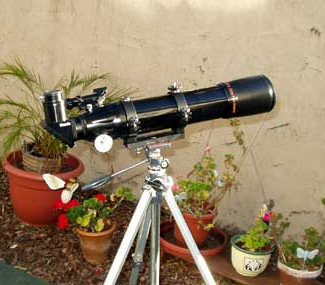 I started my amateur astronomy "career" and love of telescopes in the 5th grade. My teacher, Mrs. Cameron had an interest in astronomy, so it was only natural that she spent more time on the subject than most teachers. That was a mere 56 years ago, although it seems just like yesterday. Since then, I've built or owned a whole variety of telescopes, and my first scope was a 3" reflector from Harry Ross Company. No one's ever heard of the company, but I remember the telescope well. Now I find myself, years later, still enjoying this hobby that we all share. I own 6 telescopes, including a C8, C9.25, C11 and Takahashi FS-128.

The Orion ED80 has received a good number of well deserved reviews from a variety of sources. These were good enough to prompt me to buy one of these scopes, and I've found it lives up to its reputation for relatively color free images. I had some fun one evening when a friend of mine who owns a TeleVue 85 and I had a shootout of the Orion scope and his. He was pretty angry with himself in that he spent much more money than needed for a good 80mm aperature telescope.

I became curious about the Celestron C80ED after I saw a description of the scope on the Celestron website. This was just before Celestron was sold to Synta, the company that manufacturers the ED80, the C80ED and more. I also realized that the lens for the Orion ED80 and C80ED would be the same, so obviously both scopes would perform about the same. Without much thought, I ordered one of the Celestron C80ED's from telescopes.com and received it four days later.

As I opened the shipping carton, I found that the scope was inside an inner container as well. The scope was well packed and the finder, a 25mm Plossl eyepiece and 45-degree diagonal were all in their own separate little boxes in front of the objective. A note about the 45-degree diagonal. For some reason, probably so as to compete in a slightly different market than Orion, Celestron sells this telescope as a "spotting scope". At first I wondered why I couldn't find the C80ED on many of the vendors' websites I usually visit. I found it by chance when looking at the spotting scope section.

Upon first inspection, I found the scope very well made. I really didn't know what to expect, as I had never seen one of these before. The scope is all metal, and differs from the Orion in a couple of ways. First, the OTA is 90mm in diameter as opposed to the 100mm diameter of the Orion ED80. One interesting aspect of the telescope is the "tube ring". It fits very tightly and when I removed the ring, it left some dull areas in the paint. The tube ring is unique in a couple of ways. It uses "latches" to close the ring around the OTA -- the kind of latches you normally see on a foot-lock trunk. There is also a "built-in" dovetail that is part of the casting which is CG5 compatible. I found that a nice feature, as I was using a Stellarvue M1 alt-azmuth mount to hold the scope. There is a also a 1/4-20 hole if one is inclined to put the scope on a photo tripod.

The focuser is a rack and pinion whereas the Orion has a crayford focuser. The action on the focuser is "OK" and tended to stick slightly. After a bit of cleaning and running the extension tube in and out a couple of times, it was more acceptable. Still, I like the crayford focuser much better. The C80ED supports 1.25" and 2" eyepieces and an 1.25" eyepiece adapter is included. The only plastic on the scope is the dust cover for the objective, and while it serves its purpose, it doesn't fit very well, and has a tendency to fall off readily. The shape of the dew shield is curved a bit, so it is unlikely that there will be a nice aftermarket dust cover very soon. Finally, the C80ED is an attractive shiney black color and looks stylish, if a telescope can be described as such.

The finder is a 6x30 straight-thru instrument with cross hairs. The finder bracket is nicely done with a spring-loaded adjuster and 2 screws. This way, adjusting the finder is quite easy. The dovetail that holds the finder also accomodates the kind of red-dot finder that is sold just about everywhere, including the Orion EZ Finder. I actually prefer the red-dot finder for this scope. The 25mm Plossl eyepiece and 45-degree diagonal are useable, but I've put them aside for higher quality accessories.

One of the first things I did was check the collimation of the scope. I used a cheshire and found the collimation appeared to be "right on". It was perfectly collimated. The Orion, on-the-otherhand, required an adjustment of the focuser assembly to bring it into perfect collimation. The only thing remaining was to get the scope out under the stars for first-light.

I chose to use a Williams Optics standard 90-degree diagonal and a TeleVue 17mm Nagler on the scopes' maiden voyage. As I waited for the sun to set I noticed that Venus and Jupiter were clearly visible. Venus was a bit low on the horizon for any meaningful views, but Jupiter was high enough. As I brought the scope into focus I was absolutely thrilled with the performance. The image was just beautiful. Jupiter was in sharp focus around its entire limb, there was considerable detail on the planet and not a hint of false color. I increased power to a 12mm Nagler and then a Meade 8.8mm UWA for some really nice higher power views.

It was finally dark enough to perform a star test. I'm the kind of guy who routinely checks the collimation of his telescopes, particularly the SCTs. I used the 8.8mm UWA for this purpose and chose Polaris as the star. At 2nd magnitude, it an ideal object for startests. The defraction rings were perfectly formed both inside and outside of focus. The star test confirmed that the collimation was right on. Since, the lens cell and focuser affix to the OTA with threads, there is no means by which collimation can be corrected if needed. Fortunately, this wasn't a problem. When in focus, the stars are beautiful pinpoints against a nicely contrasted background. The scope "snaps" into focus as one would expect. I'm sure someone who knows more than I would find some issues with the figure of the lens, but since it can't be corrected I only care about the performance of the scope "in focus".

To finish out the evening, I chose to look at the common Messier objects we all love at this time of year. The globular clusters such as M13 and M22 were just spectacular. The dumbell, the ring and Lagoon nebulas were really nice viewing. The double cluster was outstanding. I did power up to a 12mm Nagler and found that this is the eyepiece I prefer for deep sky observing with this telescope. Since the telescope is an f7.2 with a 600mm focal length, I found it very easy to locate objects with the red-dot finder.

I had a chance to compare the C80ED with an Orion 80ED the other night. My friend and I used the same eyepieces and looked at the same objects. The scopes, as one would expect, are equivalent. I did notice my friends ED80 was packed into a smaller space, as he removed the dew shield and found a 4" plastic cover for the objective. The dew shield of the C80ED doesn't come off quite easy enough so as to accomplish the same space-saving storage.

All in all, the scope is a real winner. The 90mm OTA looks less "stubby" than the ED80, and the all black color scheme is very nice. It would have been nice had the focuser been the crayford style and the dust cap was of higher quality. I really liked the fact that the scope cost about $100 less than the Orion. So, if any of you are thinking of an 80mm ED glass refractor that is affordable, I highly recommend the Celestron C80ED.

ADDENDUM: Last September 2005 I reviewed the Celestron C80 and the Orion 80ED. I mentioned in the second to last paragraph that the dew shield on the C80 doesn't come off very easily, thereby making storage a little more difficult (note that many Orion owners use the smaller Stellarvue storage case for their telescopes).

Upon further examination, I found that the C80's dew shield in threaded into place (the Orion is slip-fitted). Holding the telescopy firmly, I was able to remove the dew shield with about 10 or 11 turns counterclockwise. While one would have to improvise a lens cover for the objective, it is possible to use the Stellarvue case quite easily.

Click here for more about the Celestron scope. -Ed.

Click here for more about the Orion offering. -Ed.