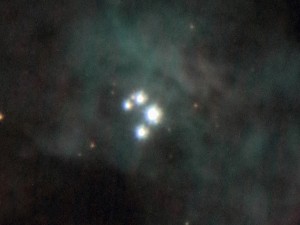 I was “awakened” recently, in the middle of the day, by an emailing from my good Oregonian friend, Joseph Wong, whose message served the same purpose as that of a highly effective, decibel-unlimited, alarm clock in making me aware of a brand-new 80mm ED apochromatic refractor scope from Orion for the remarkable price of only $429! After exploring the Orion Website, I excitedly noted the following, paraphrased, information: The “ED 80” f/7.5 apochromatic refractor is wonderfully suited to provide visual applications on both solar system and deep-sky objects as well as for prime focus astrophotography and CCD imaging. It contains a fully multicoated 80mm objective lens doublet, one element being made from Extra-Low Disperson, or “ED” optical glass.

I honestly must confess I was seriously thinking of plunking down over $1300 for a Televue 76 mm apochromatic scope, when this new Orion 80mm ED presented me a low-cost-alternative opportunity. Hmmmm, could this scope be anywhere as nice in performance as the highly touted Televue 76?! After hearing that a few of the Orion ED 80’s would, that very day, be driven down from the Headquarters warehouse in Watsonville, CA, I decided that now was the time to take a drive down to Orion’s retail store in Cupertino, a bit south and west of San Jose, CA, to get a look-see at these new optical wonders….well at least as claimed by Orion.

By the way, I have no financial interest or gain in any products from Orion Telescopes and Binoculars.

Now back to the story. Orion’s Cupertino retail store has plenty of scopes, binoculars and accessories to both look at and to try out with several Orion-blue-smocked personnel ready to be of assistance to any interested customer. I asked if the new ED 80’s had arrived and was told, just wait a moment….and almost immediately one of these still-boxed-up apochromatic tube assemblies was brought out to me, from the rear store room, to examine. I spied a nearby Orion Standard Paragon tripod and asked one of the long-time Orion employees, Ken, if he could secure the new apochromatic scope, with its built-in ¼”-20 mounting plate onto it. “Well sure!” was the reply and in no time at all I got a chance to have a “first light” day-experience with the Orion ED 80 tube assembly, of 600 mm focal length, which was painted in gunmetal gray and came equipped with a 2 inch to 1.25” adapter. I took a careful look at the coatings on the primary 80mm ED objective lens and saw only greenish colored images of the store’s fluorescent lamps reflecting off the lens and absolutely no white colored reflections from the same lamp images; a testimony to the fact that the primary is fully multicoated. No other accessories or diagonal is supplied with this scope, so I “borrowed” one of the retail store’s right angle star diagonals, a 6X30 finder scope, and several eyepieces of various focal lengths.

In particular, I tried out an Orion Expanse 6mm eyepiece which yielded 100X and found the sun’s point-image as reflected by telephone pole insulators several hundred yards away to be really sharp as well as the sharp image of the wood making up the telephone pole, itself. I was quite impressed by the backlash-free 2” Crayford-style focuser, which operated very smoothly and which reminded me of the same looking focuser on the Televue 102, although I realize the focuser on the Televue is better built and even a bit smoother. The nice part of this focuser is that it has NO GREASE to get on your fingers/hands when operating the scope. More than intrigued by the nice “day time testing,” I paid for the Orion ED 80 scope, plus a 6X26 mm correct-image finder scope which easily fit into the molded-in dovetail base of the ED 80 Optical Tube Assembly(OTA), and eagerly headed about 43 miles north east to my home in San Ramon, CA.

The first session was made while comparing my brand new Orion 80mm ED Apochromatic scope with my “Accidental - see previous Cloudynights article” scope, a Televue 102mm, costing over $2000, masked down to 80mm aperture. The Orion 80mm ED was outfitted with a 6mm Orion Expanse eyepiece(yielding 100X), while the masked Televue 102 was equipped with a 9mm Orion Expanse eyepiece(yielding 98X): The ED scope was secured to a Televue Upswing mount, while the Televue 102 was positioned on a Gibraltar mount. I used enhanced Lumicon right angle mirror diagonals labeled as 96% reflectivity for all three viewing sessions.

1.) 90% Illuminated moon. The Televue 102 performed better, although just barely, because the Orion ED 80 had just a minor, and very thin, amount of yellowing at the very edge of the bright limb, which I had to look for in order to see it. The Televue 102 had no perceptible bright limb color. Contrast wise, both scopes performed very admirably on the lunar surface, with no perceivable chromatic “violet haze” which allowed small lunar landmarks to be viewable through both scopes in an equally nice way. Advantage: Slight edge to the Televue 102

2.) Mars. Sporting a diameter of 24.4 arc seconds and glowing brilliantly with a magnitude of -2.4. Quite close to its historic August 27th, 2003, closest approach in over 1000 years when it will present a diameter of 25.1 arc seconds/at magnitude -2.9. Both scopes showed the Martian dark-green surface markings and both scopes also showed the polar ice cap clearly defined. There was absolutely no chromatic/violet glow surrounding the disk of Mars. Advantage: Call it a tie.

3.) Double Cluster in Perseus. On this lovely double-open cluster duo, I observed a tad better performance with the Orion ED scope, although the view in both scopes was very nice with crisp stellar images and with both scopes clearly displaying the red giant stars in the grouping. Advantage: Slight edge to the Orion ED 80.

4.) Epsilon Lyrae(Double-Double). Both scopes easily “split” this object. Advantage: Call it a tie.

5.) Vega(Alpha Lyrae). Both scopes showed a wonderfully classic apochromatic set of diffraction rings around this bright blue-white 1st magnitude star with no discernible chromatic violet aberration around the star. Advantage: Call it a tie.

Eagerly impressed by this new Orion 80mm ED scope, I decided to try it out during my second viewing session, but only “solo-style,” using my Orion Expanse Series Eyepieces and an Orion Shorty 2X barlow as follows:

1.) 73% Illuminated moon. The Orion ED 80 clearly and crisply displayed the largest craterlet within Plato, approximately 3km/2mi in diameter, at both 133X and 200X using the Expanse 9mm and Expanse 6mm eyepiece with 2X Orion Shorty barlow, respectively.
Again, no chromatic violet aberration was viewed outside the moon’s bright limb.

Note(for both observations 1.) and 2.), immediately above): Orion states the highest theoretical magnification is 165X for the Orion ED 80mm apochromatic scope, but I believe that under steady atmospheric conditions, 200X or 64X per inch aperture is and was attainable.

3.) Orion Nebula. The Trapezium was viewed with its very lovely blue-gray nebulosity at 30X using a 20mm Expanse eyepiece.

The third and final viewing session was conducted using a set of Orion Highlight Series Plossls as follows:

2.) Galaxies in Andromeda. M31’s oval-shaped outline was clearly seen though the Orion ED 80, while both of the 8th magnitude companion galaxies, M32 and M110, were visible with direct vision at 30X when using the Highlight 20mm plossl eyepiece. Note: Very nice light gathering ability for this ED 80; especially on the low surface brightness companion galaxy, M110, considering the overhead limiting magnitude was about 3.5.

3.) Double Star Gamma Andromedae. This one was very easy to split at 30X, when using the Highlight 20mm plossl eyepiece, as the Orion ED 80 showed a “clean” separation between the yellow primary and the blue companion of this picturesque double star.

Conclusions: The Orion 80mm ED Apochmatic Refractor is a true “bargain” in the world of apochromatic telescopes and, in my opinion, may not be easily equaled, both optically and mechanically, when considering the open-market of quality refractors. Sure, for many hundreds of dollars more, one can get a better apochromatic scope, but is it really worth the additional cost? At 5.7 pounds, it is a lightweight performing like a true heavyweight in the realm of highly recommended OTAs.

P.S. All 30 or so original-stock Orion 80mm ED Apos have been purchased and there is about a 25 day minimum wait until a new shipment arrives into Watsonville, CA, Headquarters.