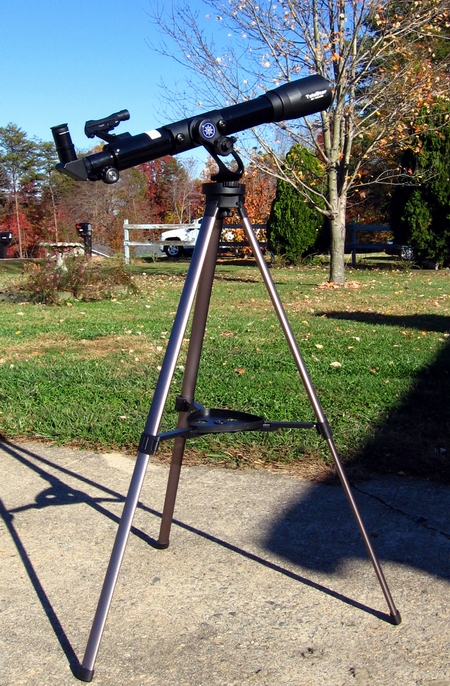 Every time I attend a star party where the public is invited, it happens sooner or later. A parent comes up to my telescope with his child and says “Don’t touch that telescope now. Don’t touch that!” Well, with tens of thousands of dollars of telescope equipment scattered across the parking lot I guess that’s good advice. But it bothered me nonetheless. Children really need to take a hands-on approach for a proper learning experience. It just didn’t seem right to tell children that telescopes were for looking at, but not for using and enjoying. Well, my Stellarvue Nighthawk might be ¼ the cost of many of those telescopes out there, but I am no less apprehensive about leaving my telescope unattended with a bunch of crumb-crunchers around it. So I set out to find a solution.

One day, my wife and I went through the Wal-Mart checkout and were on our way out when suddenly… there it was! A Meade TeleStar! A 60mm f/10 telescope with finder scope, two eyepieces, Barlow, and alt-az mount with slow-mo controls. And the price: fifty nine ninety five! I grabbed one off the shelf, told my wife to guard the groceries, and went back through the check-out line. Here is a telescope I could sit out at the star party and let the children play with. But on the way home, it suddenly dawned on me: what if this telescope is nothing but a piece of trash? Would anyone actually be able to see something through it? Tension mounted as I pulled the telescope out of the box. Would this really be something good enough for children to use? Well, read on, for here is my story of “The Wal-Mart Wonderscope.”

I have to hand it to Meade this time. Usually, you get a toy that promises 600x power and enough light grasp to take you back to the Big Bang. But the eyepieces in this set take the telescope only up to 133x, certainly a useable power for a 60mm telescope. Except for one minor detail: as I found out later, the cheap optics in this scope will not support 133x at all. In fact, the 9mm eyepiece alone will give you 67x and that is about as far as I would recommend pushing it. Still, there ought to be a LOT to see at 67x or below! How much to see, I’ll go into later…

This telescope system, for $60, actually has a number of features found on much more expensive telescopes: a decent 1-1/4” focuser, a removable dew shield for easy cleaning of the optics, a snap-on lens cap that actually fits right, a red dot finder that really works and is easy to align, two 1-1/4” eyepieces (25mm and 9mm), a 2x Barlow, an alt-az mount with slow-motion controls, and a tripod with an eyepiece tray. It was when I put this system together that I found the bad news. The system actually gets together easily enough. In fact, I would say that any child could learn to set up or take down the telescope in a matter of minutes. But the mount immediately showed some issues. First, the “slow-mo” controls are really “no-mo” controls. They are just too coarse and stiff to use at all. The good news is, if you unscrew the tension knobs on the no-mo, the mount actually has a smooth up-down, left-right action to it for a scope of this weight. Just grab the diagonal and it’s rather easy to aim. Secondly, the scope is very unsteady on its mount. If you tap the telescope it rings like a church bell at the Sistine Chapel. The good news is, if you stick to under 67x (like I recommend) the mount is not all that bad overall, and the wobble does not make the scope unusable.

Okay, what about the optics? Well, you’re not expecting 600x out of a $60 telescope, are you? Good! I put the 25mm something-or other eyepiece in and aimed it at the Moon. The Moon was nearly full, with the terminator just past Grimaldi. The view was lacking in contrast and not really tack sharp, as I expected. But what I did not expect was the false color: I didn’t see any. The eyepiece itself has a horrible case of lateral color, giving the Moon a cyan toupee, but I couldn’t see any color fringing from the objective. Although contrast was so-so, I could still see variations in the light-dark areas across the sunlit lunar surface. I could make out Mare Crisium, and the “lakes” to the southeast. And Mare Australe was poking its head around the limb that night. With the Barlow in, at 32x, I could still see no color fringe and the extra magnification did not degrade the image very much at all. I could immediately identify at least a dozen more targets easy enough for a beginner, Tycho, Copernicus, Plato, Aristarchus, Reiner Gamma, and Grimaldi, for example. And the crater Schickard showed its light and dark zones. The 9mm eyepiece, giving 67x, was definitely beginning to tax the limits of this objective, showing a lunar limb lacking in detail, but overall I feel that what I saw would be more than enough to tip the excitement scale into the “WOW” zone for any child. I decided on a whim to try some of my better eyepieces. I grabbed a few brand-name plossls made by the Taiwanese company GSO. These eyepieces did indeed give an improved image both in sharpness and in contrast. The improvement was not significant, but it proved that the eyepieces that come with the telescope do not match the quality of the telescope itself.

I know that many will disagree with me, but I feel that a child’s first scope should be a refractor, rather than a reflector. That is because a refractor can double as a day-time terrestrial telescope, giving your child more opportunities to use it. I was actually rather impressed with the TeleStar’s daytime accomplishments. With the 25mm eyepiece, I could count the veins in the leaves of a poplar tree at 100 yards. I could see pine cones in a pine tree over 200 yards away. Just be sure to tell your child to NEVER point the telescope at two things: the sun, and your neighbor’s bedroom windows.

Now, for the road test! I set it up at a public observing party with the 25mm eyepiece so that the kids could play with it while the adults handled my $1000 gear. I instructed a few kids how to use it and it turned out to be quite popular. It was rather helpful in keeping the 8 year-olds occupied. I found Jupiter for them, not much more than a tiny, distorted blur at 24x. But some of the better targets, M13, M22, Lagoon nebula, could actually be seen rather well through this scope. I told every child to have at it and play with it all they want. After I gave instructions to one or two children, they started to show one another how to use the scope. One young man played with it a lot. I guess he was about 7 or 8. He asked me about the scope and I told him I got it at Wal-Mart for $60. "Wow!" He said. "I'm going to get one of those with my allowance. It will take me 20 weeks. I only get three dollars a week." Well, at least he already has the rudimentary math skills to compute eyepiece power, focal ratio, and field of view.

I know a lot of people think, myself included, that these cheapo scopes do more harm than good, with their lousy distorted views and shaky mounts. But the enthusiasm I saw that night might seem to contradict this. Children grow up with a burning desire for two things: learning and companionship. If you buy a telescope like this one for your child, the scope will provide the learning. It is up to you to provide the companionship. Children have too many opportunities to get into trouble these days. The telescope is $60. A beginner’s astronomy book about $20. A quality plossl eyepiece about $45. Spending some time under a starry night with your child is, well, priceless.