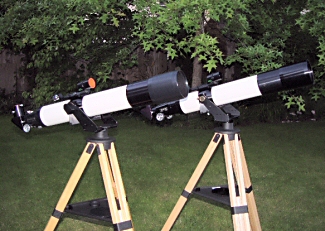 [ARTICLEIMGR="1"]I have owned almost two dozen telescope in the past 18 years. Lot's of Achromats, Schmidt Cassagrains and, Newtonians. But I have always wanted to own a 4 inch Televue refractor. However I could not justify spending thousands of dollars on a 4 inch telescope, when a simple 6 inch F-8 Dobsonian could outperform the 4 inch for a fraction of the price.

Still, the desire for a Televue Apo ate away at me for years. Then about 6 months ago I came upon a used TV Genesis SDF on Astromart (to your right in the picture). Compared to the cost of a new Televue NP101, it was a bargin. I did a little research on the Genesis SDF and found out that it was the same basic design as the newer NP101. An F-12 doublet objective with a 2 element reducer correcter near the focuser.

When I received the Genesis SDF I was very suprised at how long it was for a telescope with only 540 mm focal length. It is almost 30 inches from the end of the focuser [racked in] to the end of the dew cap [not extended]. The focuser is extremely smooth, and not all gunged up with grease as many import refractors are.

Under the stars is where the Genesis SDF really showed it's stuff. Deepsky objects are supprisingly bright for a small telescope due to the high contrast unobstructed optics.

Stars show textbook diffraction patterns on both sides of focus, and at high power [ 200X plus] the stars look like little bullet holes with a nice even first diffraction ring all of the way arround.

Jupiter is wonderous. The north and south equatorial belts come alive with festoons and spots. The polar hoods reveal themselves as many individual bands. Shadow transits have an errie blackness to them. The moons themselves seem easy to pick out as they transit the face of the great Jovian globe.

The SDF is indeed an impressive telescope. So impressive in fact that my long time observing partner Mike, was found many nights glued to the eyepiece of my scope. Mike has always been a Newtonian fan. [with good reason]
He has owned a couple of achromats by primarily he sticks with his dobsonians.

One day Mike called me to say that he had just picked up a Televue TV 102 (to your left in the photo), and I should come over to have a look at it. The TV 102 is another piece of telescope craftmanship
from opical wizzard Al Nagler. This time it is a 2 element F8.8 Apochramat. The size is very similar to my SDF, with the TV 102 being about 3 inches longer.

Naturally we had to try it side by side with the Genesis SDF. The test subject was Jupiter. I was concerned that the 10 year old SDF would not live up to the modern glass of TV 102. The seeing was about 7 on a scale of 10. We tried our best to match magnification on both scopes. Of course when you have one telescope with a focal length of 540 mm and the other 880 mm there are going to be some variables.

The TV 102 reached 195X with a 2X barlow and 9 mm plossl. My SDF required a 2.5X barlow and my 6.7 ultrawide to reach 201X. The Genesis SDF was more critical to focus. Being a fast F-5.4, the Genesis had a smaller [shallower] depth of field. It is either in focus or not.
There is no in between, or close focus in this scope.

The TV 102 seemed to have more depth of field and was easier to find a suitable focus. To my surprise the color correction between the two scopes was very close.
The color correction in the SDF was a little more sensitive to seeing than the TV 102. Both scopes showed color when racked in and out of focus. However at sharpest focus under moments of very good seeing neither scope showed color that I could attribute to the telescope's optics. Although I have seen color using cheap eyepieces or due to atmospheric refraction. I must admit, though, that the TV 102 was a tad sharper, but you would have to have them side by side to notice. This may be due to the fewer elements in the optical train of the TV102. I tell Mike that it is because my SDF is only 101 mm and that his scope has 102mm.

These are both great telescopes, and would satisfy most planetary observers for years to come.