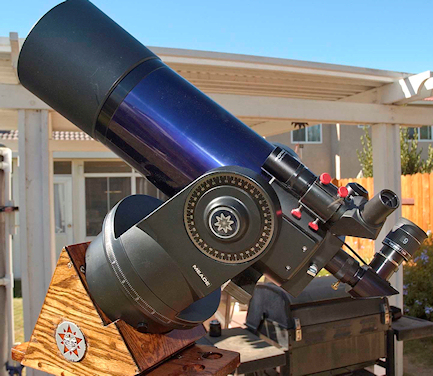 Let me start out by saying I really love my ETX-125 telescope. I have larger scopes but this is really a special one. The optics are first rate and when I want to do some serious lunar observing, it’s easy to put up and tear down and observing the moon is especially nice, With good seeing and a decent cool-down time, the views are hard to beat. As serious lunar observers know, you want to be able to see small details and be able to study geological formations. I recently used 275X and a red filter on the moon with this scope and I found the view very, very good. Just a ton of small details to be seen. The best views I've seen are in the early morning when the seeing is better and the scope has come to thermal equilibrium. Just amazing views. I’ve been using the scope on the moon a lot lately because right now, the moon is low in the sky while it waxes and high in the sky during morning hours while it wanes. The seeing is not great when it’s low in the sky and viewing in the early morning is a bit of a chore so the ease of set-up and tear-down means a lot.

Here's my entire setup, mounted on a homemade wedge consisting of thick Red Oak planks. Most of my improvements can be seen in this photo.

Also, Jupiter and Saturn are quite nice through this scope. I’ve done a lot of viewing lately of the cloud bands and the satellite formations of Jupiter. At a dark site, you can see a lot although the diameter of five-inch does limit you regarding deep sky objects.

Having said all this, owning this scope is a bit of a love-hate relationship because of some of the shortcomings. But I’ve been able to remedy most of them to make this scope even more valuable. They are all on the outside of the scope and the cost has been minimal and this tome is about doing some of these improvements; improvements which I think a lot of ETX owners would appreciate. Eventually I’m looking at a goal of doing what’s called a “supercharging” service by Dr. Clay Sherrod. He works on both the optics and inside of the mount to maximize the performance; a complete overhaul which I’ve read does wonders for the scope. Unfortunately, it’s a goal that’s distinctly long-term goal for me after I was laid off late last year. I’ll just have to wait.

All the things I’ve done for my ETX are easily accomplished, a lot of them were found at Mike Weasner’s Mighty ETX site. It has literally hundreds of ideas posted by Weasner and other ETX owners concerning improvements to the scope. It can be found at www.weasner.com/etx/menu/html. Right now I will concentrate on the five improvements I’ve done. I’ve included photos of everything I’ve done.

(1) The first is balancing the scope. It’s front-heavy and the explanation I’ve heard for that is that when you put equipment on the back end like a camera it balances but I think that is sort of self serving by Meade. I think it’s a fact of life that a Maksutov has a heavy front element and there’s just no way around it. To remedy this what I did was put a weight on the tripod mount under the telescope. I happened to have a flat piece of steel 1-½” wide by 3/8” thick. I cut them into two 5” and one 4-½”-long pieces, epoxied them together, drilled a ¼” hole through the plates, and then painted them. That weight, combined with the finder and eyepiece remedies I did, helped to bring scope into much better balance.

(2) The finder, the finder, the finder! God bless Meade but that right-angle finder is just awful. It’s a well-made, snazzy looking finder but the optics are just bad, with mine having a permanent double image. It’s 8x25mm and I think it’s probably just too much magnification for the lens and I think a lot of the problem has to do with that right-angle mirror. I did two things about this finder. First, I replaced my ETX finder with a 6x30mm right angle, correct view finder from Orion. It’s well made and optically great. And by unscrewing the diagonal, it fits right into the ETX holder. Unfortunately, I had just sold a used one before I found this solution on Weasner’s website so I had to buy a new one. Live and learn I guess. I then replaced the nylon set screws with black steel socket screws and I found plastic socket head covers at a local ACE Hardware store. The socket screws and covers give the finder adjustment a solid, grippable feel. And the finder helps out with the balance problem. 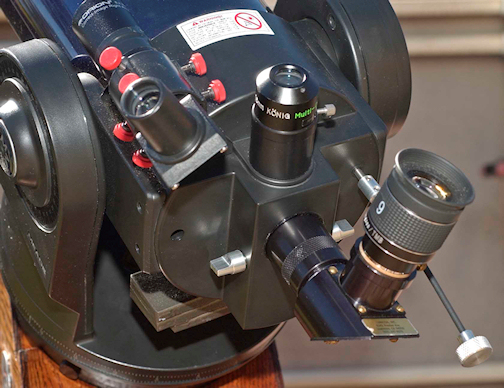 In this photo, you can see my set-up at the back end of the ETX-125, using both eyepiece ports, counterweights on the tripod mount and flex-focus cable. Also visible is the new finder. Optically, I've found that the finder is a vast improvement over the original.

3) The dewshield. This is something that Meade should have made part of the package. Any catadioptric system needs a dewshield for control of glare and dewing. Fortunately, Meade’s hood only costs $24 and it works great.

(4) The eyepiece ports. Meade’s system, like the Questar, has one permanent right-angle eyepiece port and another straight-through port for accessories like webcams and cameras. The built-in diagonal looks good enough but I was a little leery about using it for high-power work, not knowing the quality of the diagonal. I solved that problem by buying 1-¼” adapter for the straight-through port and using my Lumicon diagonal with a high-power eyepiece. I use the built-in right angle port for a lower-power eyepiece. That way I’m assured the my highest-power eyepiece has the highest quality diagonal. Another benefit is that I use both eyepieces at the same time and can switch from one to the other with the switch on the back of the ETX. Not only is that convenient, but it helps with the balance problem.

(5) Focusing on the ETX is a bit of a chore because the knob is small and it’s easy to bump your hand into the scope. You can buy a motorized focuser but I found that a flex-focus device is works well. I bought one from CNC Parts Supply and I made one also from a post on Weasner’s site.

(6) My last remedy is for the power situation. It’s nice that Meade has a ‘AA’ battery pack built in to the base of the telescope but it becomes fairly expensive, if you don’t use rechargeable batteries, to replace the ‘AA’ batteries. Plus the fact that if you do a lot of slewing or the Go-To, then that not only eats up the batteries, but the Go-To works slower. I use an AC adapter at home and a Celestron battery tank for on the road. An AC adapter is another thing that Meade should have included in the telescope but didn’t. I found through the Weasner site that you can buy a Radio Shack AC adapter for about half the price of the Meade one. The adapter I bought is #273-1775 and it cost only about $22. If you buy the AC adapter, the interchangeable plug is free. For the ETX you need an ’N’ plug. The Celestron power tank works beautifully on the road and had much more power than the ’AA’ batteries. 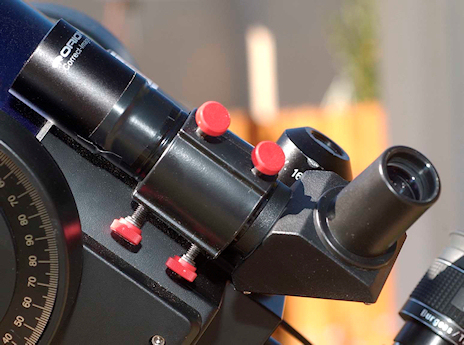 Here' a closeup of the new Orion finder, with socket-head screws and caps. The plastic caps make all the difference in adjusting the finder.

The great thing about this telescope is that with just a little ingenuity, you can modify it with outstanding results
Comments (0)