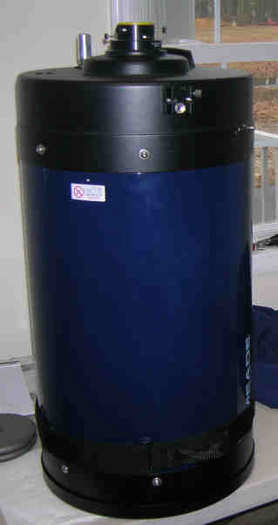 A friend bought a Meade 14” LX200 UHTC Optical Tube Assembly when the original owner removed it from the factory fork arms. When he received it the fork arm bolts had been screwed back into the OTA. Just in case the new owner wanted them. My friend mounted up his new OTA and tried focusing on a star. The focus knob stopped moving and the star still wasn’t in focus. Turning the focus knob just a bit more brought a loud crinkling snap and the focus knob jerked. Looking into the front of the tube he saw pieces of primary mirror lying in the bottom. One of the fork arm bolts had snagged the mirror chipping 5 square inches out.

A short time later I noticed the scope on Astromart. A quick exchange of emails and I had the scope on trade for a small refractor (about a $250.00 trade). Initially I just wanted the OTA to take apart. I first pulled the corrector and, after examining the optics, decided to patch the chipped mirror. A small felt patch was fabricated and cemented over the chipped area. The optics were cleaned and the telescope re-assembled. After mounting and collimating I was surprised to find a very good star test. Collimation was a little dicey with a black spot over a small segment of the diffraction rings but not too difficult to work around. Some test images proved the scope performed well with just a bit less light gathering capacity. See the patches in the following images.

The scope performed so well I began using it to image. It still had one problem. There was a noise when slewing as if something inside the base flopped around and the mirror lock didn’t work. Obviously, these symptoms were related. The mirror also showed considerable flop so something was not right in the base. This article takes you along as I take the scope apart and try to solve the problem. I don’t encourage or recommend anyone doing this. While no better than average mechanical skills are needed this is very sensitive and expensive equipment. A slip can break a very expensive piece of glass. Also, that glass can severely cut if broken. Best to use this article for satisfaction of curiosity instead of a guide to working on a telescope. I remember several years ago looking for an article like this when someone asked how the mirror lock worked so it might be of interest to some.

Originally my thoughts were either pull the base or pull the mirror assembly and see if the problem was field repairable. After looking at how Meade puts the OTA together, pulling the base this was obviously not a good idea. The OTA (Optical Tube Assembly) is pressed into the base and would take special tools to remove. I could find no instructions on pulling the mirror assembly though. Without a mirror lock and reduction of flop this OTA wasn’t going to be a winner. With the money invested vs. the potential benefit I decided to go for it.

The scope was placed on a padded table. Then all external items (finder mounts, mounting plate and piggyback adapter) were removed. Then the OTA was carefully examined. A person posted a link on the Internet saying there was a circular retaining ring under the visual back that should be removed to pull the mirror. On this OTA this ring retains the baffle tube core holding it in the OTA.

Once free lift it out and put it aside in a secure chair as shown. This keeps anything from touching the optics. Note the secondary mirror inside the corrector plate cell.

Next remove the Focus Knob and Mirror Lock Knob Assembly. These are held in by 3 screws in a retaining plate. The knobs are held onto their shafts by setscrews and are removed first.

The Mirror lock knob slips right off once its setscrews are loose. Once the knob is free the retaining plate is taken off by removing the screws and carefully pulling the plate back just a bit. Once this is done the mirror locking gear mechanism can be removed through the base plate hole. Slant it to the outside of the OTA housing and pull it straight back. 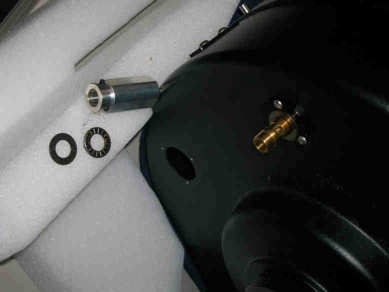 Once the mirror assembly has cleared the baffle tube you are now holding the whole weight and it is one large piece of glass. It weighs 20 pounds so be careful. While holding the baffle tube carrier with one hand reach behind the mirror and grasp the mirror cell assembly with the other hand. Tilt the assembly parallel with the base of the OTA and slide the mirror through the two cutouts in the corrector plate retaining ring. It’s tight but it will work. Also, the focus shaft and alignment assembly may snag on the retaining ring of the corrector plate. Just rotate the mirror assembly a bit and they will clear.

To the left in the above picture is the aligning block for the mirror assembly. It slips over the small white metal track at the base of the OTA tube seen in the picture below.

Here you can clearly see the cutouts used to remove the primary mirror assembly. Take careful notice of the small shiny block bolted to the side of the OTA halfway between the focus knob hole (top) and the mirror lock hole (bottom). The mirror cell assembly has an arm that must be positioned precisely over this block.

With it this far apart though I figured I’d find out where the weight was in a Meade OTA. Why is it so much heavier than a Celestron of similar size? Now was the time to weigh the components.

First the mirror assembly. The mirror is about an inch thick and is pretty heavy. The cell it is mounted on is well made and well designed. Most of the weight has to be in the glass as the cell is aluminum.

Notice the patches I had placed on the mirror. This was done without removing the mirror. Just reaching down inside the OTA….. way down inside. That is one long OTA tube.

The OTA with no glass comes in at 39 pounds. That just 6 pounds under a full up Celestron C-14 OTA with primary mirror and corrector installed. That’s one heavy base plate assembly.

With the weigh in completed the whole process of disassembly was reversed. All went back together very well. The clutch shaft was slipped back on which secured the primary mirror assembly. Then the Mirror Lock knob assembly slipped in. With the mirror lock gear screwed onto the back of the primary mirror cell the locking mechanism works like a champ. With it all buttoned up it was time for the final weigh in. 67 pounds without a dovetail and 74 pounds with a Losmandy Dovetail.

This Meade OTA is one fine piece or work. I've gone round after round with Meade (6 LX200Rs, 1 RCX) on mechanical issues. Also Takahashi and Celestron all in the past year. If everything was like this 14" LX200 nothing would ever break on its own.

I've taken Takahashi refractors, Celestron SCTs and a bunch of other stuff apart and put them back together. Often with only a few parts left over. I just haven't seen many things match the engineering in this older Meade OTA. The mirror cell was just right. Had a solid but light feel to it. The mirror looked like a beautifully shaped creation. Not perfect but just right.

Focus shafts out of well machined brass. Bearings on both sides of the keeper. I've never seen a knob threaded and set screwed to a shaft before. The threading exerts pressure and can actually reduce mirror flop. Another thumbs up for the focus shaft.

Mirror lock out of just enough aluminum to work with strength in reserve. That mirror lock was slick. Just a snug and the shaft was locked with a tapered ring. Anywhere on the shaft. The mirror lock shaft had a drum gear (don't see those everyday) with keepers that had a spring allowing the drum to follow the locking gear up and down the baffle tube. Almost no weight to it but more than up to the job. Man that thing deserves a patent (which I'm sure it has).

The carrier tube for the mirror cell fit the baffle tube perfectly. Gently tapered and solid. A lot of effort went into that machining. Everything with the baffle tube and carrier was amazingly solid.

The corrector assembly was ok. Better than the Celestron C-14 I took apart last year. The Celestron secondary housing had a tendency to rotate. I didn't much like the plastic around the Meade secondary but it does the job well. The primary mirror cell end is where the money is in that scope. And a good job at that. Overall, a well made telescope. 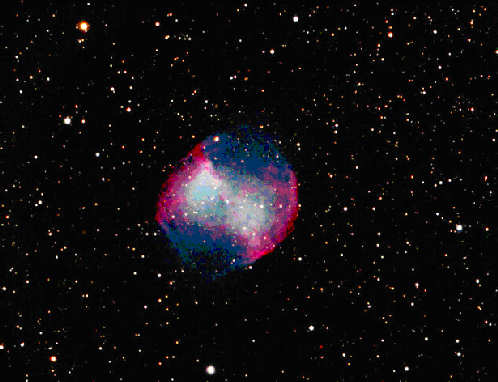