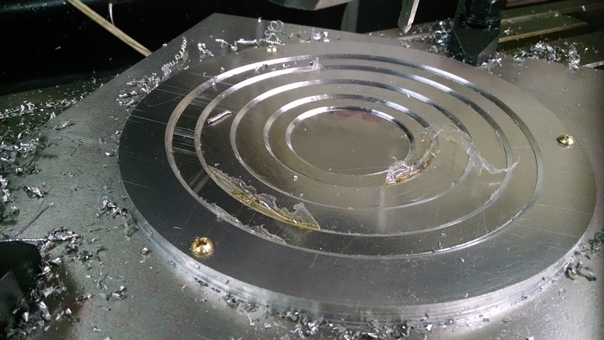 Stacked in the orientation they will be when viewed from the front of the scope.

The knife edges turned out great....they are actually close to razor sharp. Dangerously so. 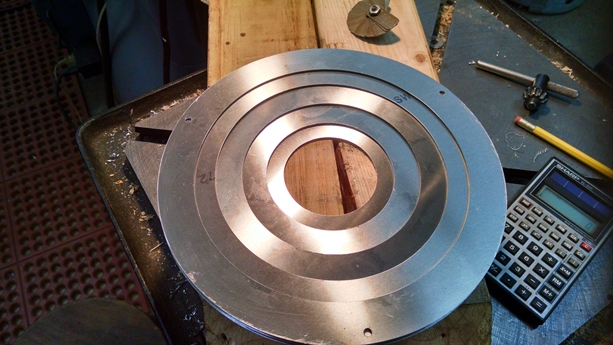 We had it out last night for a final round of star testing etc before disassembling for powder coating and brass plating of the trim parts..... 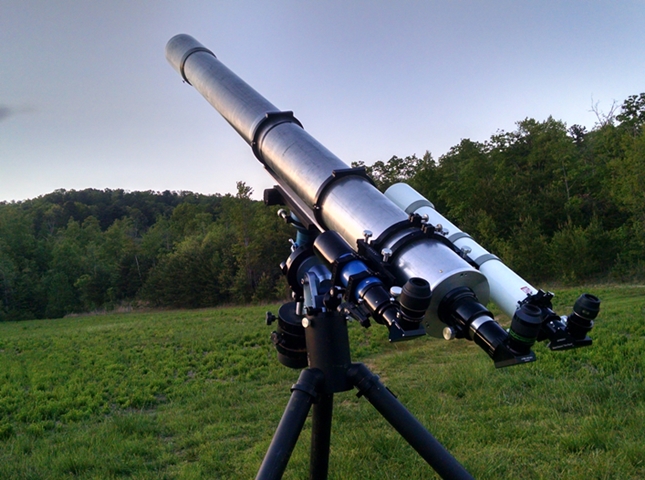 So this scope is all but complete, at the point where it needs to go to the powder coaters and the trim bits to the plater's.

Ever since I 1st started testing the lens I have been somewhat baffled about what I was seeing in the EP. At 90x the moon looks good, but stars had a somewhat bloated appearance. Not being especially experienced in building refractors as in this is the 1st one. I kept thinking, well its not perfectly collimated, its not baffled, its not cooled to equilibrium etc etc.

Well this past weekend we set it up and had fairly decent skies, the baffles were painted and installed, we lined the front of the tube to the 1st baffle and the dew shield with poster paper painted flat black and made sure it had plenty of time to stabilize temp wise. Virtually eliminating all the things that made me unsure what the cause was for what I was seeing and we played with it at 90x 225x and 450x. Moon still looked good at 90x, but horribly soft at anything above that.

We collimated it VERY well.....Star testing revealed really pretty good results inside of focus, outside of focus was another matter. When you could see them it had nice concentric rings also but it was really really nasty, boiling, spiking etc.

Viewing Jupiter at any power it was confusing, at best focus on the moons Jupiter was surrounded by a yellow halo about the width of 1/8 of the planet width. If you went for best focus on Jupiter the moons were out of focus and uniformly spikey looking.

I had been pouring over Harold Suiter's book on star testing for several weeks now trying to find something that would explain what I had been seeing in my testing to no avail.....

Now that I had eliminated all the things I had been excusing the view with I was feeling pretty dejected. Felt as if we had put all this time and effort into what appeared to be a bad lens, we attempted to remove the lens from the cell to check the rotational alignment of the pair, hoping the optician marked them and that they had gotten spun out of alignment when turning the cell down to fit in the tube with collimation clearance. However disassembly was problematic and given my lack of experience I wasn't willing to chance chipping or cracking etc.....

I had seen similar effects on a C11 that a prior owner had taken apart and accidentally reversed the corrector plate. It wasn't a drastic thing and not nearly as pronounced as what we were seeing in this refractor but compared to my other C11 it definitely had an issue. once we discovered the corrector plate was backwards based on the serial # engraved on its edge and corrected it then the two performed pretty much identically. This led us to investigating the lens orientation in the cell......

We shined a laser thru the lens and observed the dots it made on the lens surfaces. Because the lens spacing is only .004 you really only perceive 3 of the 4 surfaces but that is all we needed.

I have to admit my lack of experience in working with lenses left me confused as to how it could possibly work as well as it did with the lens reversed but it was obvious. I have the original ZEMAX design specs by Norman Remer and design data that the lens was figured from and Mike Jones was kind enough to plug the design into the modern ZEMAX and per his comments it was a VERY well done design with very good spot diagrams of the projected performance and he has quite a reputation in optics and designing scopes. Mike was again kind enough to plug the prescription into ZEMAX in reverse and the result matched up with exactly what we were seeing in the EP.....Yellow halo around Jupiter, bloated stars etc.

Problem solved, turn the lens around lol.....However as I mentioned the cell made 35 years ago doesn't appear to follow normal construction and we being inexperienced in such things were hesitant to get too forceful with it.

So it was off to find a professional to deal with it.....Muffoletto Optics went away when Verne died back in 1986 or so but one of the former opticians had given us some info on where those guys ended up in my build thread on Cloudy Nights about 4 years ago. In 1987 9 of the former Muffoletto folks formed Nu-Tek Optics which has grown to a large optics house that does mostly government contracts and professional optics work on large projects. I contacted them via that person who is still there, a Mr Robert Bupp. They were enthusiastic to have a chance to play with this classic lens from back in their early careers at Muffoletto.

I am shipping it off to them today for disassembly, cleaning, optimizing and testing for waveform accuracy etc. I am told one of the guys that will be working on it more than likely had his hands on it 35 years ago......and several of the original 9 from Muffoletto are still there today including Robert Bupp.

I have had this lens about 5 years myself and am the 1st to build a scope with....Having talked with several folks who were familiar with Muffoletto from back in the day they had a world class reputation in the optics world and I now believe once again this lens will prove out to be well worth the time and effort put into building the scope.

Gotta love it when a plan comes together.... 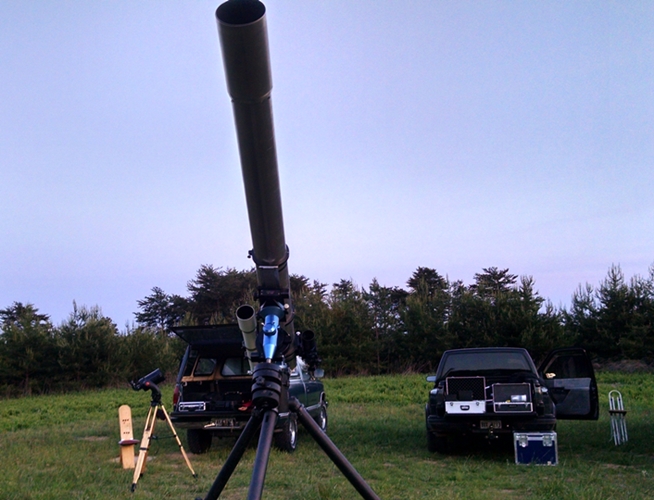 As John pointed out it was high time I updated this thread....

After discovering that the lenses were reversed and sending it off for interferometer testing and discovering it was badly spaced on top of being reversed we made a new spacer for between the lenses out of ABS and finished the physical build of the scope. Have been using it for a few months now and it performs even better than I hoped it would.

After all the measuring for testing and validating the design, two different sources confirmed that spacing the lenses to .664 would cure its issue with excessive blue fringing,it was caused by an issue with R3 not being to design spec on the radius.

We made the spacer out of a block of ABS on the lathe....Once we got it under the stars we knew right away that the issues were over. Both sources (Nu-Tek and Mike Jones a optical engineer with Lockheed-Martin) were in agreement the change should make it perform per Remer's original prescription and they were spot on, I really don't believe it could be any better. Saturn and Jupiter are just flat out amazing in it with no perceptible fringing at all when using binoviewers and just the barest hit of blue fringe with single EP's on Jupiter.

The R3 radius by design was supposed to be 43.0" and it was actually 42.040" for a deviation of 0.960" which is significant as it represents a 2.23% variation from the design spec and was resulting in a lot of visible blue fringing. The new spacing cleared that up nicely.

Pic of ABS spacer....we cut baffling ridges into the ID of 0.035" deep and 0.050" wide given the distance between the lenses is now over 1/2" I was concerned with reflections.....it musta worked

Been gathering up the parts for sometime now and have everything on hand now except for 9" tube itself.

Been thinking on the best way to construct the baffle system and it hit me like a ton of bricks yesterday.....

Use carbon graphite arrow shafts cut to the proper lengths to space out the baffles properly, can cut them to lenght, glue in the inserts, drill holes in the baffels and simply insert them sandwiched between the shafts, three shafts per section, ending up with an all in one assembly that I have just slide into the tube and anchor at each end of the assembly.....super lightweight, strong and already black.....


Based on my calculations I will end up with 5 baffels.....using thin aluminum sheet for the baffels themselves.....I dont see any reason it wouldnt work and work well.....any thoughts? 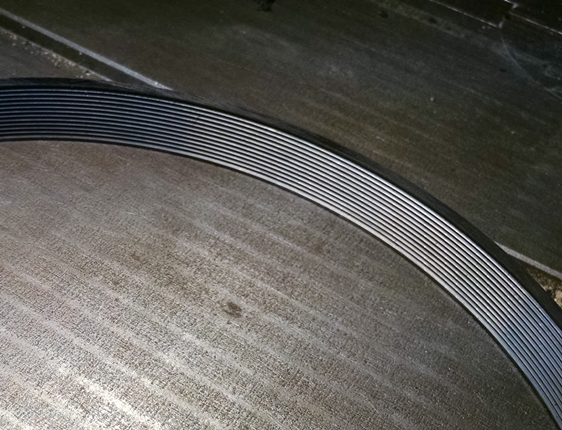