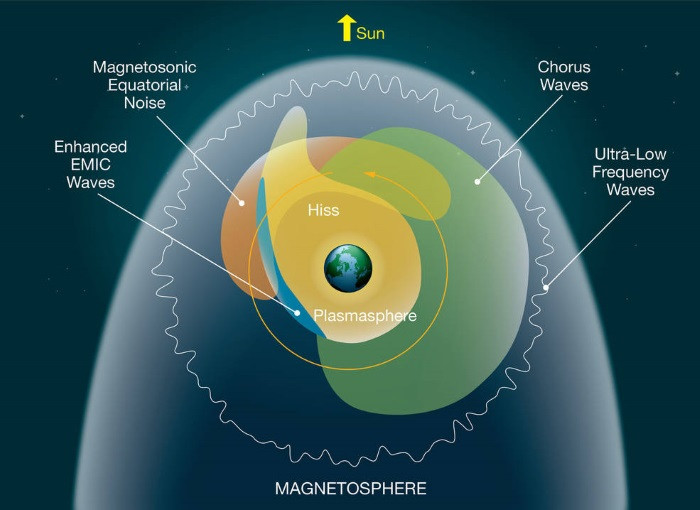 Different types of plasma waves triggered by various mechanisms, occupy different regions of space around Earth. Using data from NASA’s THEMIS mission, scientists have discovered ­that when the magnetopause is struck by a jet of plasma from the Sun, it vibrates like a drum, with waves echoing back and forth along its surface, much like they do on top of a drumhead. The new discovery comes several decades after such behavior was first theorized. (Credit: Mara Johnson-Groh – NASA's Goddard Space Flight Center, E. Masongsong - UCLA, M. Archer - Queen Mary University of London, H. Hietala – University of Turku Finland) (Image Credit: NASA's Goddard Space Flight Center, Mary Pat Hrybyk-Keith)

Space isn’t silent. In fact, an entire orchestra of instruments fills our near-Earth environment with eerie sounds. Scientists have long known about space phenomena involving electromagnetic waves travelling around Earth that resonate like string instruments and whistle like wind instruments. Now, new research published in Nature Communications has added a percussive member to the cosmic ensemble -- a giant drum, triggered by plasma jets striking the boundary of the protective magnetic bubble surrounding our planet.

Using data from NASA’s THEMIS mission (Time History of Events and Macroscale Interactions during Substorms), the scientists discovered ­that when the Earth's magnetopause is struck by a jet of plasma from the Sun, it vibrates like a drum, with waves echoing back and forth along its surface, much like they do on top of a drumhead. The new discovery comes several decades after such behavior was first theorized.

“Given the lack of evidence over the 45 years since they were proposed, there had been speculation that these drum-like vibrations might not occur at all,” said Martin Archer, space physicist at Queen Mary University of London and lead author of the new paper. “Now we see that waves on the magnetopause’s surface reflect between two points near the magnetic poles -- acting very much like a drum."

Inside the magnetosphere, scientists have long been listening in on space sounds created by various electromagnetic waves. This veritable orchestra of waves can be heard as sound when processed correctly, and they even exhibit similar behaviors to certain musical instruments. So-called magneto-sonic waves pulse through plasma in the same way sound bounces through wind instruments. Another type of wave, known as an Alfven wave, resonates along magnetic field lines, just like string instruments’ vibrating strings. While both of these types of waves can travel anywhere in space, the newly discovered waves are a type of surface waves -- waves that require some sort of boundary to travel along.

In this case the magnetopause acted as the boundary. When a plasma jet (the drumstick) strikes the magnetopause, surface waves form a standing wave pattern, where the ends appear to be standing still while other points vibrate back and forth, just like a drumhead. The fixed points in the wave, which are the rim or edge of the drum, are near Earth’s magnetic poles and the waves vibrate the surface of the magnetopause in between. While the wave itself remains on the surface, the vibrations ultimately work their way down into the magnetosphere and trigger other types of waves.

“The waves likely penetrate far into the inner magnetosphere causing ultra-low frequency waves, which affect things like radiation belts, the aurora, and even the ionosphere,” Archer said.

The new study used data from the THEMIS mission, which initially used five identical probes to determine what physical process in near-Earth space initiates the auroras.

"The authors make great use of observations from a time early in the mission when the spacecraft followed each other along their mutual orbit like pearls on a string,” said David Sibeck, THEMIS project scientist at NASA’s Goddard Space Flight Center in Greenbelt, Maryland. “In this fortunate case, the THEMIS spacecraft were in just the right place to see the drumstick and hear the drum."

The scientists plan to look through archival THEMIS data for more of these events around Earth and determine how often the magnetopause may be booming like a drum. This research may also help provide insights into how to look for this phenomenon at other planets with magnetospheres, like Jupiter and Saturn, and what effect they may have in those systems.