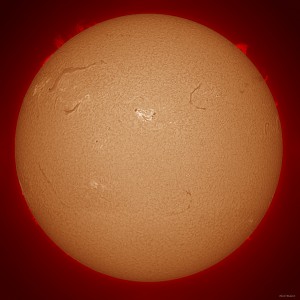 Einstein's Theory of General Relativity Proven to be 99.95% Right 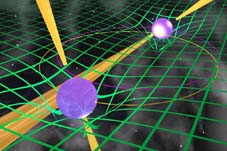 A pulsar is a neutron star, which is the collapsed core of a massive star that has ended its life in a supernova explosion. Weighing more than our Sun, yet only 20 kilometres or so across, these incredibly dense objects produce a beam of radio waves that sweep around the sky like a lighthouse, often hundreds of times a second. Radio telescopes receive a regular series of pulses from Pulsars as the beam repeatedly crosses the Earth so the object is observed as a pulsating radio signal.

An international research team led by Prof. Michael Kramer of the University of Manchester's Jodrell Bank Observatory in the UK has used three years of observations of a "double pulsar", a unique pair of natural stellar clocks that they discovered in 2003, to prove that Einstein's theory of general relativity is correct to within a staggering 0.05%. Their results are based on measurements of an effect called the Shapiro Delay.

The double pulsar system, PSR J0737-3039A and B is 2000 light-years away in the direction of the constellation Puppis. It consists of two massive, highly compact neutron stars, each weighing more than our own Sun but only about 20 km across, orbiting each other every 2.4 hours at speeds of a million kilometres per hour. Separated by a distance of just a million kilometres, both neutron stars emit lighthouse-like beams of radio waves that are seen as radio "pulses" every time the beams sweep past the Earth. It is the only known system of two detectable radio pulsars orbiting each other. Due to the large masses of the system, they provide an ideal opportunity to test aspects of General Relativity including:

1) Gravitational Redshift: the time dilation causes the pulse rate from one pulsar to slow when near to the other, and vice versa.

2) Shapiro Delay: The pulses from one pulsar when passing close to the other are delayed by the curvature of space-time. Observations provide two tests of General Relativity using different parameters.

3) Gravitational radiation and orbital decay: The two co-rotating neutron stars lose energy due to the radiation of gravitational waves. This results in a gradual spiralling in of the two stars towards each other until they will eventually coalesce into one body.

By precisely measuring the variations in pulse arrival times using three of the world's largest radio telescopes, the Lovell Telescope at Jodrell Bank, the Parkes radio-telescope in Australia, and the Robert C. Byrd Green Bank Telescope in West Virginia, USA, the researchers found the movement of the stars to exactly follow Einstein's predictions. "This is the most stringent test ever made of General Relativity in the presence of very strong gravitational fields -- only black holes show stronger gravitational effects, but they are obviously much more difficult to observe", says Kramer.

Since both pulsars are visible as radio emitting clocks of exceptional accuracy, it is possible to measure their distances from their common center of gravity. "As in a balanced see-saw, the heavier pulsar is closer to the centre of mass, or pivot point, than the lighter one and so allows us to calculate the ratio of the two masses", explains Ingrid Stairs of the University of British Columbia in Vancouver, Canada. "What's important is that this mass ratio is independent of the theory of gravity, and so tightens the constraints on General Relativity and any alternative gravitational theories." adds Maura McLaughlin of the University of West Virginia in Morgantown, WV, USA.

Though all the independent tests available in the double pulsar system agree with Einstein's theory, the one that gives the most precise result is the time delay, known as the Shapiro Delay, which the signals suffer as they pass through the curved space-time surrounding the two neutron stars. It is close to 90 millionths of a second and the ratio of the observed and predicted values is 1.0001 +/- 0.0005 (a precision of 0.05%).

A number of other relativistic effects predicted by Einstein can also be observed. "We see that, due to its mass, the fabric of space-time around a pulsar is curved. We also see that the pulsar clock runs slower when it is deeper in the gravitational field of its massive companion, an effect known as "time dilation".

A key result of the observations is that the pulsar's separation is seen to be shrinking by 7mm per day. Einstein's theory predicts that the double pulsar system should be emitting gravitational waves - ripples in space-time that spread out across the Universe at the speed of light. "These waves have yet to be directly detected ", points out Prof. Dick Manchester from the Australia Telescope National Facility, "but, as a result, the double pulsar system should lose energy causing the two neutron stars to spiral in towards each other by precisely the amount that we have observed - thus our observations give an indirect proof of the existence of gravitational waves."

Michael Kramer concludes; "The double pulsar is really quite an amazing system. It not only tells us a lot about general relativity, but it is a superb probe of the extreme physics of super-dense matter and strong magnetic fields but is also helping us to understand the complex mechanisms that generate the pulsar's radio beacons." He concludes; "We have only just begun to exploit its potential!"