Extreme Energy Space Particles May Have a Unified Origin 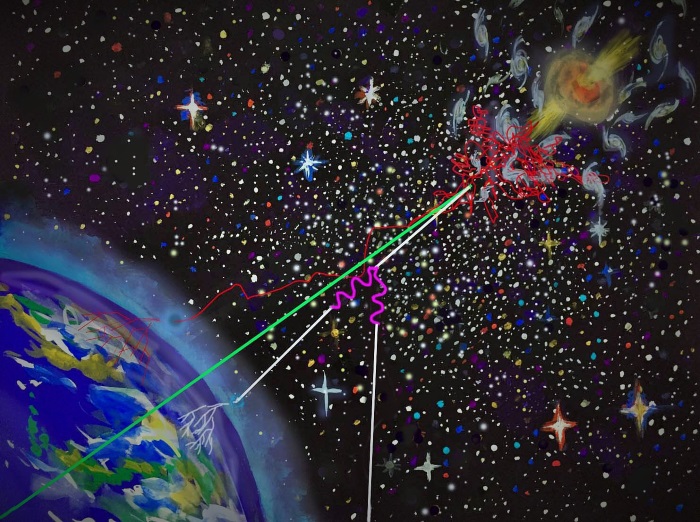 One of the biggest mysteries in astro-particle physics has been the origins of ultrahigh energy cosmic rays, very high energy neutrinos, and high energy gamma rays. Now, a new theoretical model based on work by Penn State and University of Maryland researchers, reveals that these extreme energy space particles may have a unified origin in cosmic rays that are accelerated by powerful jets emanating from supermassive black holes.

The new model explains the natural origins of all three types of "cosmic messenger" particles simultaneously and is the first astrophysical model of its kind based on detailed numerical computations.

"Our model shows a way to understand why these three types of cosmic messenger particles have a surprisingly similar amount of power input into the universe, despite the fact that they are observed by space-based and ground-based detectors over ten orders of magnitude in individual particle energy," said Kohta Murase, Assistant Professor of Astrophysics at Penn State. "The fact that the measured intensities of very high energy neutrinos, ultrahigh energy cosmic rays, and high energy gamma rays are roughly comparable tempted us to wonder if these extremely energetic particles have some physical connections. The new model suggests that very high energy neutrinos and high energy gamma rays are naturally produced via particle collisions as daughter particles of cosmic rays, and thus can inherit the comparable energy budget of their parent particles. It demonstrates that the similar energetics of the three cosmic messengers may not be a mere coincidence."

Ultrahigh energy cosmic rays are the most energetic particles in the universe. Each of them carries an energy that is too high to be produced even by the Large Hadron Collider, the most powerful particle accelerator in the world.

Neutrinos are mysterious and ghostly particles that hardly ever interact with matter. Very high energy neutrinos, with energy more than one million mega-electronvolts, have been detected in the IceCube neutrino observatory in Antarctica.

Gamma rays have the highest known electromagnetic energy. Those with energies more than a billion times higher than a photon of visible light have been observed by the Fermi Gamma Ray Space Telescope and other ground-based observatories.

"Combining all information on these three types of cosmic messengers is complementary and relevant, and such a multi-messenger approach has become extremely powerful in the recent years," Murase said.

Murase and co-researcher Ke Fang, a postdoctoral associate at the University of Maryland, attempt to explain the latest multi-messenger data from very high energy neutrinos, ultrahigh energy cosmic rays, and high energy gamma rays, based on a single but realistic astrophysical setup. They found that the multi-messenger data can be explained well by using numerical simulations to analyze the fate of these charged particles.

"In our model, cosmic rays accelerated by powerful jets of active galactic nuclei escape through the radio lobes that are often found at the end of the jets," Fang said. "Then we compute the cosmic ray propagation and interaction inside galaxy clusters and groups in the presence of their environmental magnetic field. We further simulate the cosmic ray propagation and interaction in the intergalactic magnetic fields between the source and the Earth. Finally we integrate the contributions from all sources in the universe."

The leading suspects in the half-century old mystery of the origin of the highest energy cosmic particles in the universe were in galaxies called "Active Galactic Nuclei," which have a super-radiating core region around the central supermassive black hole. Some active galactic nuclei are accompanied by powerful relativistic jets. High energy cosmic particles that are generated by the jets or their environments are shot out into space almost as fast as the speed of light.

"Simultaneously, the very high energy neutrino spectrum above one hundred million mega-electronvolts can be explained by particle collisions between cosmic rays and the gas in galaxy clusters and groups. Also, the associated gamma ray emission coming from the galaxy clusters and intergalactic space matches the unexplained part of the diffuse high energy gamma ray background that is not associated with one particular type of Active Galactic Nucleus."

"This model paves a way to further attempts to establish a grand unified model of how all three of these cosmic messengers are physically connected to each other by the same class of astrophysical sources and the common mechanisms of high energy neutrino and gamma ray production," Murase said. "However, there also are other possibilities, and several new mysteries need to be explained, including the neutrino data in the ten million mega-electronvolt range recorded by the IceCube neutrino observatory in Antarctica. Therefore, further investigations based on multi-messenger approaches -- combining theory with all three messenger data -- are crucial to test our model."

The new model is expected to motivate studies of galaxy clusters and groups, as well as the development of other unified models of high energy cosmic particles. It is expected to be tested rigorously when observations begin to be made with next generation neutrino detectors such as IceCube Gen2 and KM3Net, and the next generation gamma ray telescope -- the Cherenkov Telescope Array.

The Cherenkov Telescope Array (CTA) is the next generation ground-based observatory for gamma ray astronomy at very high energies. With more than 100 telescopes located in the northern and southern hemispheres, CTA will be the world's largest and most sensitive high energy gamma ray observatory.

"The golden era of multi-messenger particle astrophysics started very recently," Murase said. "Now, all information we can learn from all different types of cosmic messengers is important for revealing new knowledge about the physics of extreme energy cosmic particles and a deeper understanding about our universe."