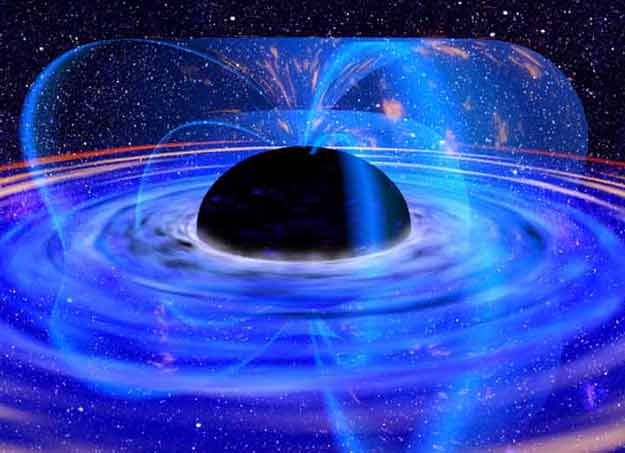 Researchers have shown how a bizarrely shaped black hole could cause Einstein's general theory of relativity, a foundation of modern physics, to break down. However, such an object could only exist in a universe with five or more dimensions.

The researchers, from the University of Cambridge and Queen Mary University of London, have successfully simulated a black hole shaped like a very thin ring, which gives rise to a series of "bulges" connected by strings that become thinner over time. These strings eventually become so thin that they pinch off into a series of miniature black holes, similar to how a thin stream of water from a tap breaks up into droplets.

Ring shaped black holes were discovered by theoretical physicists in 2002, but this is the first time that their dynamics have been successfully simulated using supercomputers. Should this type of black hole form, it would lead to the appearance of a "naked singularity," which would cause the equations behind general relativity to break down.

General relativity underpins our current understanding of gravity. Everything from the estimation of the age of the stars in the universe, to the GPS signals we rely on to help us navigate, is based on Einstein's equations. In part, the theory tells us that matter warps its surrounding spacetime, and what we call gravity is the effect of that warp. In the 100 years since it was published, general relativity has passed every test that has been thrown at it, but one of its limitations is the existence of singularities.

A singularity is a point where gravity is so intense that space, time, and the laws of physics, break down. General relativity predicts that singularities exist at the center of black holes, and that they are surrounded by an event horizon -- the point of no return, where the gravitational pull becomes so strong that escape is impossible, meaning that they cannot be observed from the outside.

According to Markus Kunesch, one of the reasearchers and a PhD student at the University of Cambridge, as long as singularities stay hidden behind an event horizon, they do not cause trouble and general relativity holds. This is known as the "cosmic censorship conjecture. "As long as the cosmic censorship conjecture is valid, we can safely predict the future outside of black holes. Because ultimately, what we're trying to do in physics is to predict the future given knowledge about the state of the universe now."

But what if a singularity existed outside of an event horizon? If it did, not only would it be visible from the outside, but it would represent an object that has collapsed to an infinite density, a state which causes the laws of physics to break down. Theoretical physicists have hypothesized that such a thing, called a naked singularity, might exist in higher dimensions.

"If naked singularities exist, general relativity breaks down," said co-researcher Saran Tunyasuvunakool, also a PhD student at Cambridge. "And if general relativity breaks down, it would throw everything upside down, because it would no longer have any predictive power. It could no longer be considered as a standalone theory to explain the universe."

We think of the universe as existing in three dimensions, plus the fourth dimension of time, which together are referred to as spacetime. But, in branches of theoretical physics such as string theory, the universe could be made up of as many as eleven dimensions. Additional dimensions could be large and expansive, or they could be curled up, tiny, and hard to detect. Since humans can only directly perceive three dimensions, the existence of extra dimensions can only be inferred through very high energy experiments, such as those conducted at the Large Hadron Collider.

Einstein's theory itself does not state how many dimensions there are in the universe, so theoretical physicists have been studying general relativity in higher dimensions to see if cosmic censorship still holds. The discovery of ring-shaped black holes in five dimensions led researchers to hypothesize that they could break up and give rise to naked singularities.

What the Cambridge researchers, along with their co-researcher Pau Figueras from Queen Mary University in London, have found is that if the ring is thin enough, it can lead to the formation of naked singularities.

Using the COSMOS supercomputer, the researchers were able to perform a full simulation of Einstein's complete theory in higher dimensions, allowing them to not only confirm that these black rings are unstable, but to also identify their eventual fate. Most of the time, a black ring collapses back into a sphere, so that the singularity would stay contained within the event horizon. Only a very thin black ring becomes sufficiently unstable as to form bulges connected by thinner and thinner strings, eventually breaking off and forming a naked singularity. New simulation techniques and computer code were required to handle these extreme shapes.

"The better we get at simulating Einstein's theory of gravity in higher dimensions, the easier it will be for us to help with advancing new computational techniques. We're pushing the limits of what you can do on a computer when it comes to Einstein's theory" said Tunyasuvunakool. "But if cosmic censorship doesn't hold in higher dimensions, then maybe we need to look at what's so special about a four dimensional universe that means it does hold."

A video of a very thin black ring starting to break up into droplets. In this process a naked singularity is created and weak cosmic censorship is violated. (Video Credit: Pau Figueras, Markus Kunesch, Saran Tunyasuvunakool, University of Cambridge, Queen Mary University)

The cosmic censorship conjecture is widely expected to be true in our four dimensional universe, but should it be disproved, an alternative way of explaining the universe would then need to be identified. One possibility is quantum gravity, which approximates Einstein's equations far away from a singularity, but also provides a description of new physics close to the singularity.