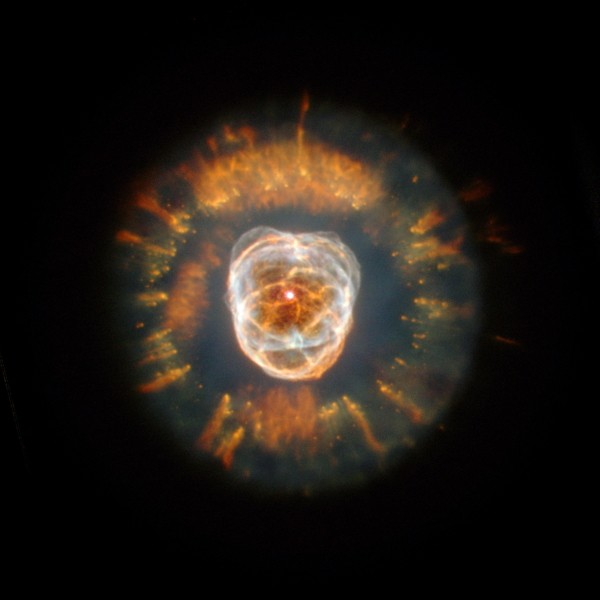 This stellar relic, first spied by William Herschel in 1787, is nicknamed the Eskimo Nebula (NGC 2392, C39) because, when viewed through ground-based telescopes, it resembles a face surrounded by a fur parka. In this Hubble telescope image, the parka is really a disk of material embellished with a ring of comet-shaped objects, with their tails streaming away from the central, dying star. Although the Eskimo's “face” resembles a ball of twine, it is, in reality, a bubble of material being blown into space by the central star's intense explosive wind of high-speed material. This object is an example of a planetary nebula, so named because many of them have a round appearance resembling that of a planet when viewed through a small telescope. A planetary nebula forms when dying Sun-like stars eject their outer gaseous layers, which then become bright nebulae with amazing and confounding shapes. The Eskimo Nebula is about 5000 light-years from Earth in the constellation Gemini and began forming about 10,000 years ago. [Credits: NASA, JPL – Caltech, and the Office of Public Outreach – STScI] [Image Credit: NASA, ESA, Andrew Fruchter (STScI), and the ERO team (STScI and ST-ECF)]

Happy New Year and welcome to the night sky report for January 2020 -- Your guide to the constellations, deep sky objects, planets, and celestial events that are observable during the month. The winter sky is filled with brilliant stars. In January, the northern hemisphere features beautiful views of Capella - a pair of giant yellow stars, Aldebaran - a red giant star, two star clusters - the Hyades (Caldwell 41) and the Pleiades (M45), and the Crab Nebula (M1).

Orion the hunter is the centerpiece, striding into the night sky with a belt of three stars. Above Orion lies a five-sided figure that forms Auriga, the charioteer, who was associated with goats. Its brightest star is Capella, which is actually a pair of giant yellow stars.

At the tip of Taurus’s horn lies the Crab Nebula. The Crab is the remains of a star that exploded as a supernova, observed by Chinese, Japanese, and Arab astronomers in 1054. Telescopes on the ground and in space have observed different forms of light given off by the Crab Nebula. Different wavelengths of visible and invisible light reveal details of the supernova remnant. Combining information from different wavelengths helps us better understand the expanding cloud of glowing gas and the spinning neutron star that remains at its core.

Antares is a red giant star located in the constellation Scorpius which has a distinctly reddish color. Since it's the brightest star in Scorpius, it's also known as Alpha Scorpii. Located about 500 light years away, Antares is enormous. It's much bigger than the orbit of Mars and it's about 10,000 times brighter than our Sun.

Antares is also a well-studied star, and thus its well-known brightness is sometimes used by researchers in studying other phenomena in space, such as the rings of Saturn. NASA's Cassini spacecraft watched Antares flicker behind Saturn's rings on on multiple occasions, which helped researchers understand the structure of the icy rings.

The name Antares translates as "rival to Mars" in ancient Greek, as the star rivals the Red Planet's appearance to the unaided eye, both in color and brightness. Mars rises before dawn during January along with Antares, its "rival."

You can view the pair low in the southeast, about an hour before sunrise each morning. Near the beginning of January, Mars appears above Antares. As the days progress, the planet moves lower and to the east of Antares. They're joined by a slim lunar crescent on January 20th for what should be a very pretty grouping.

The early morning of Jan. 4th brings the peak of the Quadrantid meteor shower. This annual shower can be one of the better ones of the year, although it has a much shorter peak than most other meteor showers - just a few hours versus a day or two.

The visibility of meteor showers from year to year has a lot to do with whether there's a bright Moon in the sky at the time or not. This year, the Moon will set soon after midnight local time, meaning viewing conditions should be good, provided your local skies are not obscured by winter weather.

Face toward the northeast between midnight and dawn to see as many as two dozen meteors per hour under dark skies. (And the farther away you get from city lights, the darker it'll be). So bundle up, and be sure to give your eyes a little time to adapt to the dark, including a break from your mobile device, in order to see the maximum number of meteors.

Unlike most meteor showers which originate from comets, the Quadrantids originate from an asteroid. Their parent body, asteroid 2003 EH1, orbits the Sun every five and a half years. Astronomers think it's possible that 2003 EH might be a "dead comet" or a new kind of object being discussed by scientists called a "rock comet."

In the early morning of January 5th, the Earth will be at perihelion, the closest we get to the Sun in our orbit. Between perihelion and 6 months later at aphelion there is about a 6.7 percent difference in the intensity of the sunlight reaching the Earth, one of the reasons the seasons in the Southern hemisphere are more extreme than in the Northern Hemisphere. Perihelion is also when the Earth is moving the fastest in its orbit around the Sun, so if you run east at local midnight, you will be moving about as fast as you can (in Sun-centered coordinates) for your location.

On January 10th, the planet Mercury will be passing on the far side of the Sun as seen from the Earth, called superior conjunction. Because Mercury orbits inside of the orbit of Earth, it will be shifting from the morning sky to the evening sky and will begin emerging from the glow of dusk on the western horizon in late January.

Closing out the month, the crescent Moon and Venus once again make for a gorgeous sight at the end of January, on the same day of the month as they did back in December. On January 28th, you'll find the pair hovering in the southwest in the hour or so after sunset that evening, so be sure to go out and take a look.