NASA Contemplates a Super-Charged Successor to the Saturn V Rocket 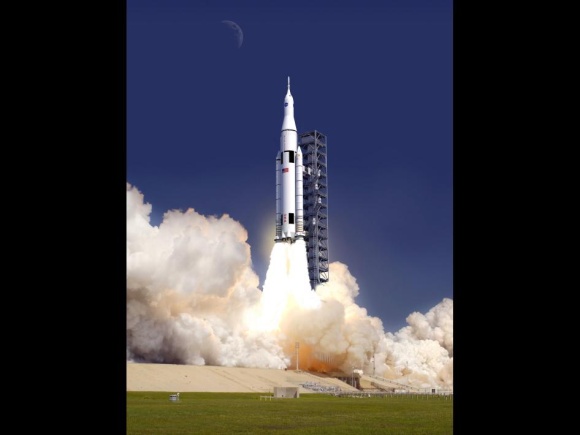 NASA is ready to move forward with the development of the Space Launch System -- an advanced heavy-lift launch vehicle that will provide an entirely new national capability for human exploration beyond Earth's orbit. The Space Launch System will give the nation a safe, affordable and sustainable means of reaching beyond our current limits and opening up new discoveries from the unique vantage point of space.

The Space Launch System, or SLS, will be designed to carry the Orion Multi-Purpose Crew Vehicle, as well as important cargo, equipment and science experiments to Earth's orbit and destinations beyond. Additionally, the SLS will serve as a back up for commercial and international partner transportation services to the International Space Station.

"This launch system will create good-paying American jobs, ensure continued U.S. leadership in space, and inspire millions around the world," NASA Administrator Charles Bolden said. "President Obama challenged us to be bold and dream big, and that's exactly what we are doing at NASA. While I was proud to fly on the space shuttle, tomorrow's explorers will now dream of one day walking on Mars."

The SLS rocket will incorporate technological investments from the Space Shuttle Program and the Constellation Program in order to take advantage of proven hardware and cutting-edge tooling and manufacturing technology that will significantly reduce development and operations costs. It will use a liquid hydrogen and liquid oxygen propulsion system, which will include the RS-25D/E from the Space Shuttle Program for the core stage and the J-2X engine for the upper stage. SLS will also use solid rocket boosters for the initial development flights, while follow-on boosters will be competed based on performance requirements and affordability considerations. The SLS will have an initial lift capacity of 70 metric tons. That's more than 154,000 pounds, or 77 tons, roughly the weight of 40 sport utility vehicles. The lift capacity will be evolvable to 130 metric tons -- more than 286,000 pounds, or 143 tons -- enough to lift 75 SUVs. The first developmental flight, or mission, is targeted for the end of 2017.

This specific architecture was selected, largely because it utilizes an evolvable development approach, which allows NASA to address high-cost development activities early on in the program and take advantage of higher buying power before inflation erodes the available funding of a fixed budget. This architecture also enables NASA to leverage existing capabilities and lower development costs by using liquid hydrogen and liquid oxygen for both the core and upper stages. Additionally, this architecture provides a modular launch vehicle that can be configured for specific mission needs using a variation of common elements. NASA may not need to lift 130 metric tons for each mission and the flexibility of this modular architecture allows the agency to use different core stage, upper stage, and first-stage booster combinations to achieve the most efficient launch vehicle for the desired mission.

"NASA has been making steady progress toward realizing the president's goal of deep space exploration, while doing so in a more affordable way," NASA Deputy Administrator Lori Garver said. "We have been driving down the costs on the Space Launch System and Orion contracts by adopting new ways of doing business and project hundreds of millions of dollars of savings each year."

The Space Launch System will be NASA's first exploration-class vehicle since the Saturn V took American astronauts to the moon over 40 years ago. With its superior lift capability, the SLS will expand our reach in the solar system and allow us to explore cis-lunar space, near-Earth asteroids, Mars and its moons and beyond. We will learn more about how the solar system formed, where Earth's water and organics originated and how life might be sustained in places far from our Earth's atmosphere and expand the boundaries of human exploration. These discoveries will change the way we understand ourselves, our planet, and its place in the universe.