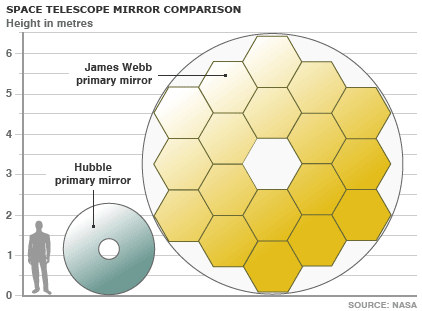 It will be larger than its predecessor, sit farther from Earth and have a giant mirror to enable it to see more.

Officials said the JWST - named after a former Nasa administrator - was on course for launch in June 2013.

The full-scale model is being displayed outside the Smithsonian National Air and Space Museum in the US capital, Washington DC.

It was recently shown off in Seattle at the American Astronomical Society meeting.

Hubble, launched in 1990, has sent back pictures of our solar system, distant stars, and remote fledgling galaxies formed not long after the Big Bang.

But scientists say the JWST will enable them to look deeper into space and even further back at the origins of the Universe.

"Clearly we need a much bigger telescope to go back much further in time to see the very birth of the Universe," said Edward Weiler, director of Nasa's Goddard Space Flight Centre.

Martin Mohan of Northrop Grumman, the contractor building the telescope, said that the team was making excellent progress.

"There's engineering to do, but invention is done, more than six years ahead of launch," he said.

When ready, the JWST will be launched by a European Ariane 5 rocket. It is expected to have a 10-year lifespan.

Until then, the 17-year-old Hubble telescope will continue to do its work. Nasa plans to send astronauts on the space shuttle to service it in 2008.