New Light Shed on an Old Dispute Between Einstein and Bohr 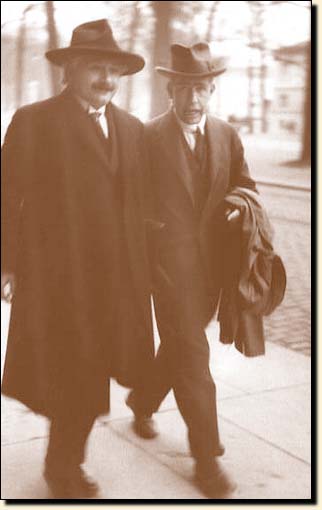 By the mid 1930s, Einstein had accepted quantum mechanics as a consistent theory for the statistics of the behavior of atoms. He recognized that it was "the most successful physical theory of our time." This theory, which he had helped to create, could explain nearly all the physical phenomena of the everyday world. Eventually the applications would include transistors, lasers, a new chemistry, and more. Yet Einstein could not accept quantum mechanics as a completed theory, for its mathematics did not describe individual events. Einstein felt that a more basic theory, one that could completely describe how each individual atom behaved, might yet be found. By following the approach of his own general theory of relativity, he hoped to dig deeper than quantum mechanics. The search for a deeper theory was to occupy much of the rest of his life.

In classical physics there are no uncertainties – the properties of matter on an atomic level are deterministic, that is to say predetermined. The theories of quantum mechanics, however, only say something about how likely the properties are and the two interpretations of the laws of physics were a source of great controversy between Einstein and Niels Bohr. Now, new research strengthens Bohr's quantum theories.

The new research, conducted in collaboration between the Department of Mathematical Analysis at the Complutense University of Madrid and Michael M. Wolf, professor of theoretical quantum physics at the Niels Bohr Institute at the University of Copenhagen, offers a reassessment of the historic dispute over Einstein's claim of the incompleteness of quantum mechanics.

The results strengthen Bohr's position by showing that any hypothetical theory that would be "more complete" than quantum mechanics, is necessarily in opposition to Einstein's principle that things can only function locally. So, for example, an event on Earth could not instantly affect what happens on the Moon. Ironically enough, Einstein's wish for a more complete description of the physical reality fail because of his own principle.

The beginning of history

From the early days of quantum mechanics, Albert Einstein did not hide his dissatisfaction with the statistical nature of quantum mechanics and the fact that certain observations such as location and time cannot be simultaneously measured with any accuracy.

Einstein especially challenged the newly developed "Copenhagen Interpretation" of quantum mechanics at the fifth Solvay Conference in Brussels in 1927 by creating a series of hypothetical experiments. They were all concerned with a common measurement of observations that are irreconcilable (i.e. not measurable jointly) according to the new theory of quantum mechanics.

However, during the conference Niels Bohr was able to refute all of Einstein's proposed examples by revealing gaps and inconsistencies in Einstein's reasoning. The dispute between Einstein and Bohr continued and culminated in 1935 when Einstein, together with B. Podolsky and N. Rosen, used a characteristic – now called entanglement – to argue that it makes sense to ascribe values to irreconcilable observations. Moreover, since quantum mechanics does not predict these values, Einstein thought that it should be considered incomplete.

This time Einstein's argument could not be refuted so easily. Even though Bohr answered quickly, it took several decades before J.S. Bell showed how the matter could be settled by an experiment. Later people like A. Aspect actually performed the experiment and disproved Einstein's claims.

Today Bohr's theories are generally accepted and we know that a complete theory in the sense that Einstein, Podolsky, and Rosen argued for is in opposition with experiments or with Einstein's principles.

However, one question remained, whether there could be a theory, which is more complete than quantum mechanics, but still incomplete enough to be in agreement with Einstein's principle. The new results, which consist of a series of theoretical mathematical calculations all answer no to this question.

"Our findings not only close the past discussion. They also tell us something about theories of the future – how theories that go beyond quantum mechanics should be. It makes no sense to look for theories that are more deterministic, that is to say more certain than quantum mechanics. If we stick to Einstein's principles, we have to accept a lot of fuzziness," explains Michael M. Wolf, professor at the Niels Bohr Institute.