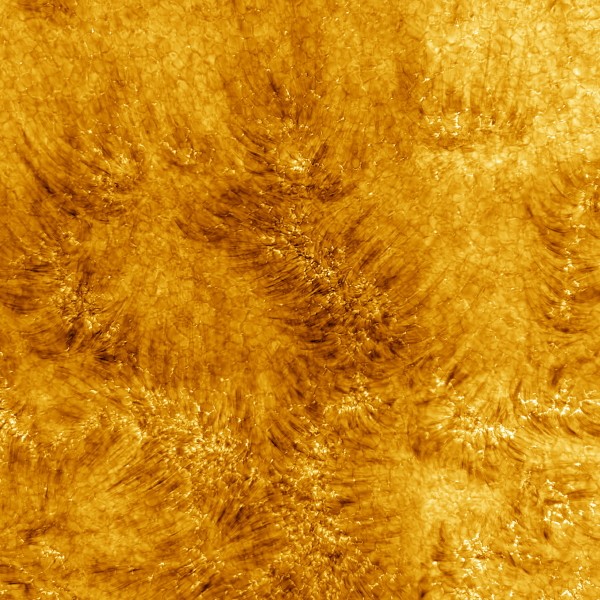 New image released in honor of the Inouye Solar Telescope Inauguration Ceremony: The first images of the chromosphere – the area of the Sun’s atmosphere above the surface – taken with the Daniel K. Inouye Solar Telescope on June 3rd, 2022. The image shows a region 82,500 kilometers across at a resolution of 18 km. This image is taken at 486.13 nanometers using the H-beta line from the Balmer series. (Image Credit: NSO, AURA, NSF)

On August 31, 2022, a delegation of National Science Foundation (NSF) leaders, congressional dignitaries, and members of both the scientific and Native Hawaiian communities gathered near the summit of Haleakalā, Maui, Hawaii, to commemorate the inauguration of the world’s most powerful solar telescope. The NSF’s Daniel K. Inouye Solar Telescope is nearing the completion of the first year of its Operations Commissioning Phase (OCP), delivering on its promise to reveal the Sun in ways never seen before.

If a picture is worth a thousand words, the images and data produced by Inouye Solar Telescope will write the next chapters of solar physics research, including two new images released in celebration of this week’s events. Over 25 years ago, the NSF invested in creating a world-leading, ground-based solar observatory to confront the most pressing questions in solar physics and space weather events that impact Earth. This vision, executed by the Association of Universities for Research in Astronomy (AURA) through the NSF’s National Solar Observatory (NSO), was realized during the formal inauguration of the Inouye Solar Telescope.

“NSF’s Inouye Solar Telescope is the world’s most powerful solar telescope that will forever change the way we explore and understand our sun,” said NSF Director, Sethuraman Panchanathan. “Its insights will transform how our nation, and the planet, predict and prepare for events like solar storms.”

The inauguration brought NSF leadership, telescope staff, and members of the scientific community together to acknowledge this historical milestone of bringing the telescope online. Representatives from the NSF, AURA, and the NSO were joined by key House and Senate staffers from the Commerce, Justice, Science, and Related Agencies Appropriations Subcommittee, as well as key staff from the House Science, Space, and Technology Committee responsible for authorizing and funding the Inouye Solar Telescope.

The Inouye Solar Telescope is located on land of spiritual and cultural significance to the Native Hawaiian people. The use of this important site to further scientific knowledge is done so with appreciation and respect. Members of the Inouye Solar Telescope Native Hawaiian Working Group were recognized for their invaluable role in educating NSF and NSO staff about cultural issues of importance to them and in providing cultural input throughout the telescope’s construction. Hōkūlani Holt, Director of the Ka Hikina O Ka Lā program at the University of Hawaii Maui College, led an opening pule (prayer) in accordance with Hawaiian cultural protocol.

The Inouye Solar Telescope has embarked on a mission to progress solar science, research, education, and foster relationships with local communities throughout Hawaii. Since OCP began in February 2022, the Inouye Solar Telescope has gathered data for more than 20 of the accepted scientific proposals and has conducted initial coordinated solar observations with NASA’s Parker Solar Probe and ESA/NASA’s Solar Orbiter.

“With the world’s largest solar telescope now in science operations, we are grateful for all who make this remarkable facility possible,” said Matt Mountain, AURA President. “In particular we thank the people of Hawaii for the privilege of operating from this remarkable site, to the National Science Foundation and the US Congress for their consistent support, and to our Inouye Solar Telescope Team, many of whom have tirelessly devoted over a decade to this transformational project. A new era of Solar Physics is beginning!”

The NSF and NSO support the development of Hawaii’s scientific & technical workforce through educational and workforce development programs. School and community outreach events, participation in the Akamai Workforce Initiative, and the NSF-funded Ka Hikina O Ka Lā program supports Hawaii and Native Hawaiian students on their journey to obtaining careers in STEM. The partnership with the National Park Service (Haleakalā National Park) to host Solar Week in 2022 exemplifies the efforts to bring solar science to the general public. Employment opportunities at the Inouye Solar Telescope aim to diversify Hawaii’s job industry and provide STEM-based career opportunities for Hawaiiʻs workforce.

The inauguration puts a stamp on an ambitious, multi-decade project to provide the world with its greatest solar observatory. The celebration honored the collaborative effort between the many entities and individuals needed to bring the telescope to operations. The inauguration marked the beginning of the Inouye Solar Telescope’s 50-year journey to revolutionize our understanding of the Sun, its magnetic behavior, and its influence on Earth.