Physicists At CERN Observe Clear Signs of the Higgs Boson 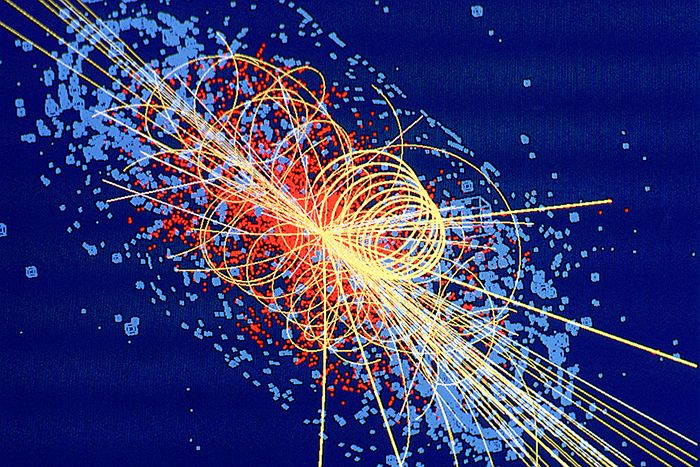 Scientists at CERN made an announcement about the Higgs Boson (aka the "God Particle") this morning. The Higgs Boson is a subatomic particle that has been predicted to exist, but has never actually been observed... Until now. Finding the Higgs Boson ties up a loose end of the Standard Model of physics, which requires a Higgs-like particle to exist.

"We have reached a milestone in our understanding of nature," said CERN Director General Rolf Heuer. "The discovery of a particle consistent with the Higgs boson opens the way to more detailed studies, requiring larger statistics, which will pin down the new particle's properties, and is likely to shed light on other mysteries of our universe."

Preliminary results were presented by the ATLAS and CMS experiment teams to scientists on site at the International Conference for High Energy Physics in Melbourne, Australia, and via webcast to their colleagues located in hundreds of institutions around the world.

"The search is more advanced today than we imagined possible," said ATLAS spokesperson Fabiola Gianotti. "We observe in our data clear signs of a new particle, at the level of 5 sigma, in the mass region around 126 GeV. The outstanding performance of the LHC and ATLAS and the huge efforts of many people have brought us to this exciting stage. A little more time is needed to finalize these results, and more data and more study will be needed to determine the new particle’s properties."

"The results are preliminary but the 5 sigma signal at around 125 GeV we’re seeing is dramatic. This is indeed a new particle. We know it must be a boson and it's the heaviest boson ever found," said CMS experiment spokesperson Joe Incandela. "The implications are very significant and it is precisely for this reason that we must be extremely diligent in all of our studies and cross-checks."

"It's hard not to get excited by these results," said CERN Research Director Sergio Bertolucci. "We stated last year that in 2012 we would either find a new Higgs-like particle or exclude the existence of the Standard Model. With all the necessary caution, it looks to me that we are at a branching point: the observation of this new particle indicates the path for the future towards a more detailed understanding of what we're seeing in the data."

The Higgs Boson is an unstable particle, living for only the tiniest fraction of a second before decaying into other particles, so experiments can observe it only by measuring the products of its decay. In the Standard Model, a highly successful physics theory that provides a very accurate description of matter, the Higgs Boson is expected to decay to several distinct combinations of particles, or channels, with the distribution among the channels depending on its mass.

ATLAS concentrated its efforts on two complementary channels: Higgs decays to either two photons or to four leptons. Both of these channels have excellent mass resolution; however, the two-photon channel has a modest signal over a large but measured background, and the four-lepton channel has a smaller signal but a very low background. Both channels show a statistically significant excess at about the same place: a mass of around 126 GeV. A statistical combination of these channels and others puts the significance of the signal at 5 sigma, meaning that only one experiment in three million would see an apparent signal this strong in a universe without a Higgs.

The current results are an update on previous analyses shown at a CERN seminar last December and published at the beginning of this year. The December results, based on 7 TeV proton collision data collected in 2011, limited the mass of the Higgs Boson to two narrow windows in the range between about 117 GeV and 129 GeV. A small excess of events above the expected background was seen by both ATLAS and CMS at around 126 GeV, about the mass of an iodine atom.

The next steps for ATLAS, the LHC and the high-energy physics community are to measure the properties of this particle and compare these measurements with the predicted properties of the Higgs Boson. Already some of these properties match the predictions: the fact that it is seen in the predicted channels and at a mass favoured by other, indirect measurements. In the weeks and months ahead, ATLAS will better measure these properties, enabling a clearer picture to emerge about whether this particle is the Higgs Boson, or the first of a larger family of such particles, or something else entirely.

The 2012 data set comes from proton collisions with an increased centre of mass energy of 8 TeV and includes more data (collected in only three months) than was collected in all of 2011. This rapid accumulation of data was possible thanks to the outstanding efforts of the LHC accelerator group. The data set presented at the seminar comes from approximately one quadrillion (million billion) proton collisions.

The ATLAS detector has performed remarkably well, even under the more difficult beam conditions of 2012, and has, with nearly full efficiency, collected high quality data for this search. Powerful computing provided by the worldwide LHC Computing Grid was essential for the reconstruction and analysis of the data.

The LHC is expected to provide ATLAS with double the data again by the end of the 2012, before the beginning of a long shutdown to upgrade the accelerator. When the machine starts up again toward the end of 2014, it will operate at nearly twice its current energy. The new 2012 data and the data generated by the improved accelerator will allow scientists to address the questions about the Higgs prompted by today’s announcement as well as other questions fundamental to our knowledge of nature.