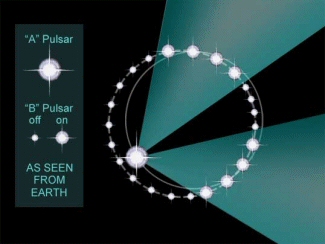 The only known gravitationally bound pair of pulsars - extremely dense, spinning stars that beam radio waves - may be pirouetting around each other in an intricate dance.

"Pulsars are intriguing and puzzling objects. They pack as much mass as the Sun crammed into an object with a cross-sectional area about as large as Boston," said Fredrick Jenet of NASA's Jet Propulsion Laboratory, Pasadena, Calif. Jenet and Scott Ransom of McGill University, Montreal, Quebec, Canada, have developed a theoretical model to explain the behavior of this one-of-a-kind set of pulsars.

"The physics of radio pulsar emission has eluded researchers for more than three decades," Jenet said. "This system may be the 'Rosetta stone' of radio pulsars, and this model is one step toward its translation."

The research appears in the April 29 issue of the journal Nature. Jenet and Ransom studied the recently-discovered double pulsar system, in which two spinning pulsars orbit each other.

The discovery of the two-star system, officially named PSR J0737- 3039B, was announced in 2003 by a multinational team of researchers from Italy, Australia, the United Kingdom and the United States. Those researchers proposed that the duo contained one spinning pulsar and a neutron star. Later in 2003, scientists working at the Parkes Observatory in New South Wales, Australia, determined that both stars are actually pulsars. This discovery marked the first known example of a "binary," or double, pulsar system. The stars are referred to as A and B.

Pulsars emit high-intensity radio radiation into a narrow beam. As the pulsar rotates, this beam moves in and out of our line of sight. Hence, we see periodic bursts of radio radiation. In this sense, a pulsar works like a lighthouse, in which the light may be on all the time, but it appears to blink on and off. Scientists were surprised to find that the B pulsar is on only at certain locations in its orbit. "It's as though something is turning B on and off," Jenet said.

According to Jenet and Ransom, this "something" is closely related to the radio emission beam emanating from the A pulsar. They believe that B becomes bright when it is illuminated by emission from A. Jenet and Ransom used Einstein's Theory of General Relativity to predict the future evolution of this pulsar system. The theory implies that gravitational effects will change the emission pattern of A, which will then alter the exact orbital locations where B becomes bright.

The double pulsar system is located about 2,000 light years, or 10 million billion miles, from Earth. Jenet and Ransom based their research on observations made at the Green Bank Telescope in West Virginia.