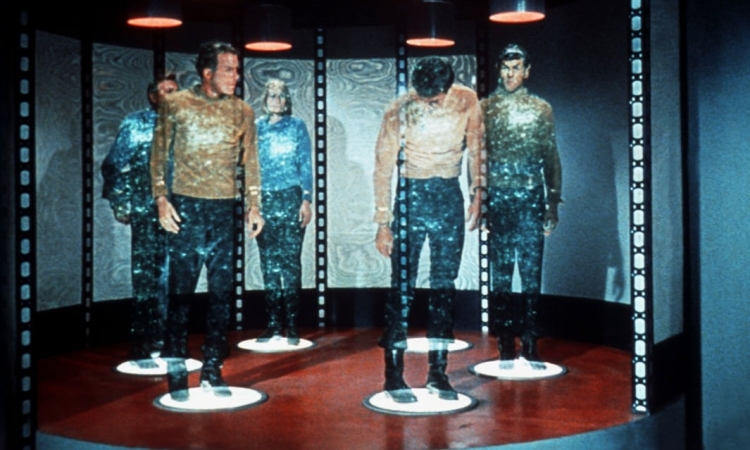 Quantum teleportation has become a standard operation in quantum optics labs around the world. The technique relies on the strange phenomenon of quantum entanglement. This occurs when two quantum objects, such as photons, form at the same instant in time and the in same location in space, and so share the same existence. In technical terms, they are described by the same wave function. According to a report in MIT Technology Review, researchers in China have teleported a photon from the ground to a satellite orbiting more than 500 kilometers above. It may not yet be the same as Star Trek, but it is a start.

Quantum entanglement is a condition where the quantum states of two particles are "entangled" by their close proximity. When the state of one particle changes the other does too, instantaneously and regardless of distance. If you want to be technically accurate, in Star Trek the matter was "teleported" in a "matter stream" meaning the matter was actually moved to a new location. There was no matter "streamed" in this test, in fact, nothing moved to a new location, just the properties of the second photon was altered. Also, a photon was used for a particle. Photons have mass equivalence but are not mass per se. I think the headline is misleading. It should have said quantum entanglement has been proven over a greater distance than before (I think the prior record was some 20 km). This is at least overenthusiastic journalism and at worst fake news.

More Voo-Doo science. Must be some big grant money hanging around out there someplace.<br><br>Which part of the photon did they "teleport" . . . the particle or the wave?<br><br>If you teleport something with no mass, did you really teleport anything at all?<br><br>How is 911 "successes" out of over a billion attempts any more than a random outcome? Don't go spreading my atoms across the universe just yet, Scottie.