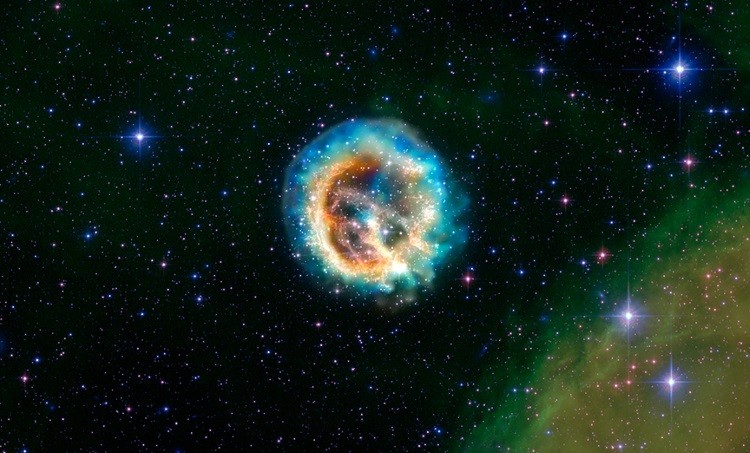 This image of the debris of an exploded star, known as supernova remnant 1E 0102.2-7219, or "E0102" for short, features data from NASA's Chandra X-ray Observatory. E0102 is located about 190,000 light years away in the Small Magellanic Cloud. It was created when a star that was much more massive than the Sun exploded -- an event that would have been visible from the Southern Hemisphere of the Earth over 1000 years ago. The image shows the outer blast wave produced by the supernova (blue) and an inner ring of cooler (red-orange) material. This inner ring is probably expanding ejecta from the explosion that is being heated by a shock wave traveling backwards into the ejecta. Analysis of the spectrum gives astronomers new information about the geometry of the remnant, with implications for the nature of the explosion. The spectrum shows some material moving away from Earth and some moving toward us. When the material is moving away, its light is shifted toward the red end of the spectrum due to the so-called Doppler effect. Alternatively, when material is moving toward us, the light is bluer because of the same effect. (Image Credit: X-ray - NASA/CXC/MIT/D.Dewey et al. and NASA/CXC/SAO/J.DePasquale; Optical - NASA/STScI)

Detection of a supernova with an unusual chemical signature by a team of astronomers led by Juna Kollmeier of the Carnegie Institution for Science, and including Carnegie’s Nidia Morrell, Anthony Piro, Mark Phillips, and Josh Simon, may hold the key to solving the longstanding mystery that is the source of these violent explosions. Observations taken by the Magellan telescopes at Carnegie’s Las Campanas Observatory in Chile were crucial to detecting the emission of hydrogen that makes this supernova, called ASASSN-18tb, so distinctive.

Type Ia supernovae play a crucial role in helping astronomers understand the universe. Their brilliance allows them to be seen across great distances and to be used as cosmic mile-markers, which garnered the 2011 Nobel Prize in Physics. Furthermore, their violent explosions synthesize many of the elements that make up the world around us, which are ejected into the galaxy to generate future stars and stellar systems.

Although hydrogen is the most-abundant element in the Universe, it is almost never seen in Type Ia supernova explosions. In fact, the lack of hydrogen is one of the defining features of this category of supernovae and is thought to be a key clue to understanding what came before their explosions. This is why seeing hydrogen emissions coming from this supernova was so surprising.

Type Ia supernovae originate from the thermonuclear explosion of a white dwarf that is part of a binary system.  But what exactly triggers the explosion of the white dwarf -- the dead core left after a Sun-like star exhausts its nuclear fuel -- is a great puzzle. A prevailing idea is that, the white dwarf gains matter from its companion star, a process that may eventually trigger the explosion. But whether this is the correct theory has been hotly debated for decades.

This led the research team behind to begin a major survey of Type Ia supernovae (called 100IAS) that was launched when Kollmeier was discussing the origin of these supernovae with study co-authors Subo Dong of Peking University and Doron Kushnir of the Weizmann Institute of Science who, along with Weizmann colleague Boaz Katz, put forward an new theory for Type Ia explosions that involves the violent collision of two white dwarfs.

Astronomers eagerly study the chemical signatures of the material ejected during these explosions in order to understand the mechanism and players involved in creating Type Ia supernovae.

In recent years, astronomers have discovered a small number of rare Type Ia supernovae that are cloaked in large amount of hydrogen, maybe as much as the mass of our Sun. But in several respects, ASASSN-18tb is different from these previous events.

“It’s possible that the hydrogen we see when studying ASASSN-18tb is like these previous supernovae, but there are some striking differences that aren’t so easy to explain,” said Kollmeier.

First, in all previous cases these hydrogen-cloaked Type Ia supernovae were found in young, star-forming galaxies where plenty of hydrogen-rich gas may be present. But ASASSN-18tb occurred in a galaxy consisting of old stars. Second, the amount of hydrogen ejected by ASASSN-18tb is significantly less than that seen surrounding those other Type Ia supernovae. It probably amounts to about one-hundredth the mass of our Sun.

“One exciting possibility is that we are seeing material being stripped from the exploding white dwarf’s companion star as the supernova collides with it,” said Anthony Piro. “If this is the case, it would be the first-ever observation of such an occurrence.”

“I have been looking for this signature for a decade” said co-author Josh Simon. “We finally found it, but it’s so rare, which is an important piece of the puzzle for solving the mystery of how Type Ia supernovae originate.”

Nidia Morrell was observing that night, and she immediately reduced the data coming off the telescope and circulated them to the team including Ph.D. student Ping Chen, who works on 100IAS for his thesis and Jose Luis Prieto of Universidad Diego Portales, a veteran supernova observer. Chen was the first to notice that this was not a typical spectrum. All were completely surprised by what they saw in ASASSN-18tb’s spectrum.

“I was shocked, and I thought to myself ‘could this really be hydrogen?’” recalled Morrell.

To discuss the observation, Morrell met with team member Mark Phillips, a pioneer in establishing the relationship (informally named after him) that allows Type Ia supernovae to be used as standard rulers.  Phillips was convinced: “It is hydrogen you’ve found -- No other possible explanation.”

“This is an unconventional supernova program, but I am an unconventional observer -- a theorist, in fact” said Kollmeier. “It’s an extremely painful project for our team to carry out. Observing these things is like catching a knife, because by definition they get fainter and fainter with time. It’s only possible at a place like Carnegie where access to the Magellan telescopes allow us to do time-intensive and sometimes arduous, but extremely important cosmic experiments. No pain, no gain.”