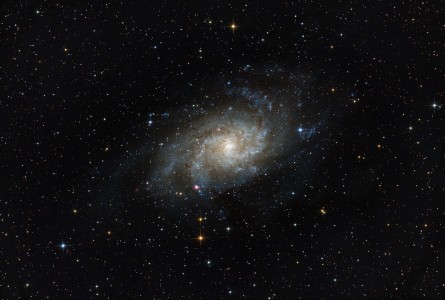 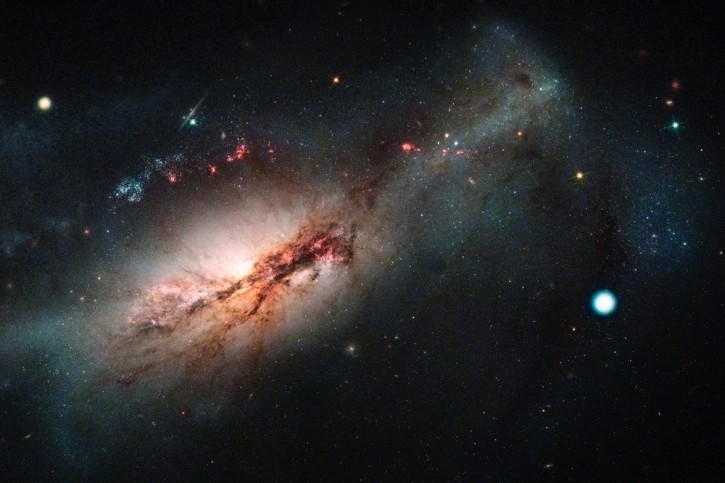 Las Cumbres Observatory and Hubble Space Telescope color composite of the electron-capture supernova 2018zd (the large white dot on the right) and the host starburst galaxy NGC 2146 (toward the left). Historically, supernovae have fallen into two main types: thermonuclear and iron-core collapse. Between these two main types of supernovae are a new third type – the electron-capture supernovae. These stars are on the path to becoming iron-core supernovae, but stop fusion and collapse at a point when their cores are composed of only oxygen, neon, and magnesium, because they aren’t massive enough to create iron. (Content Credit: University of California – Santa Barbara, Harrison Tasoff)  (Image Credit: NASA, STScI, J. DePasquale, Las Cumbres Observatory)

A worldwide team led by UC Santa Barbara (UCSB) scientists at Las Cumbres Observatory has discovered the first convincing evidence for a new type of stellar explosion — an Electron-Capture Supernova. While this new type of supernova has been theorized for 40 years, real-world examples have been elusive. These are thought to arise from the explosions of massive Super-Asymptotic Giant Branch (SAGB) stars, for which there has also been scant evidence. The discovery also sheds new light on the thousand-year mystery of the supernova from A.D. 1054 that was visible all over the world in the daytime, before eventually becoming the Crab Nebula.

Historically, supernovae have fallen into two main types: thermonuclear and iron-core collapse. A thermonuclear supernova is the explosion of a white dwarf star after it gains matter in a binary star system. These white dwarfs are the dense cores of ash that remain after a low-mass star (one up to about 8 times the mass of the sun) reaches the end of its life. An iron core-collapse supernova occurs when a massive star — one more than about 10 times the mass of the sun — runs out of nuclear fuel and its iron core collapses, creating a black hole or neutron star. Between these two main types of supernovae are electron-capture supernovae. These stars stop fusion when their cores are made of oxygen, neon, and magnesium because they aren’t massive enough to create iron.

While gravity is always trying to crush a star, what keeps most stars from collapsing is either ongoing fusion or, in cores where fusion has stopped, the fact that you can’t pack the atoms any tighter. In an electron capture supernova, some of the electrons in the oxygen-neon-magnesium core get smashed into their atomic nuclei in a process called electron capture. This removal of electrons causes the core of the star to buckle under its own weight and collapse, resulting in an electron-capture supernova.

If the star had been slightly heavier, the core elements could have fused to create heavier elements, prolonging its life. So it is a kind of reverse Goldilocks situation: The star isn’t light enough to escape its core collapsing, nor is it heavy enough to prolong its life and die later via different means.

That’s the theory that was formulated beginning in 1980 by Ken’ichi Nomoto of the University of Tokyo and others. Over the decades, theorists have formulated predictions of what to look for in an electron-capture supernova and their SAGB star progenitors. The stars should have a lot of mass, lose much of it before exploding, and this mass near the dying star should be of an unusual chemical composition. Then the electron-capture supernova should be weak, have little radioactive fallout, and have neutron-rich elements in the core.

The new study was led by Daichi Hiramatsu, a graduate student at UC Santa Barbara and Las Cumbres Observatory (LCO). Hiramatsu is a core member of the Global Supernova Project, a worldwide team of scientists using dozens of telescopes around and above the globe. The team found that the supernova SN 2018zd had many unusual characteristics, some of which were seen for the first time in a supernova.

It helped that the supernova was relatively nearby — only 31 million light-years away — in the galaxy NGC 2146. This allowed the team to examine archival images taken by the Hubble Space Telescope prior to the explosion and to detect the likely progenitor star before it exploded. The observations were consistent with another recently identified SAGB star in the Milky Way, but inconsistent with models of red supergiants, the progenitors of normal iron core-collapse supernovae.

The researchers looked through all published data on supernovae, and found that while some had a few of the indicators predicted for electron-capture supernovae, only SN 2018zd had all six: an apparent SAGB progenitor, strong pre-supernova mass loss, an unusual stellar chemical composition, a weak explosion, little radioactivity and a neutron-rich core.

“We started by asking: What’s this weirdo?” Hiramatsu said. “Then we examined every aspect of SN 2018zd and realized that all of them can be explained in the electron-capture scenario.”

The new discoveries also illuminate some mysteries of the most famous supernova of the past. In A.D. 1054 a supernova exploded in the Milky Way Galaxy that, according to Chinese and Japanese records, was so bright that it could be seen in the daytime for 23 days and at night for nearly two years. The resulting remnant, the Crab Nebula, has been studied in great detail.

The Crab Nebula was previously the best candidate for an electron-capture supernova, but its status was uncertain partly because the explosion happened nearly a thousand years ago. The new result increases the confidence that the historic SN 1054 was an electron-capture supernova. It also explains why that supernova was relatively bright compared to the models: Its luminosity was probably artificially enhanced by the supernova ejecta colliding with material cast off by the progenitor star as was seen in SN 2018zd.

Ken Nomoto at the Kavli IPMU of the University of Tokyo expressed excitement that his theory had been confirmed. “I am very pleased that the electron-capture supernova was finally discovered, which my colleagues and I predicted to exist and have a connection to the Crab Nebula 40 years ago,” he said. “I very much appreciate the great efforts involved in obtaining these observations. This is a wonderful case of the combination of observations and theory.”

Hiramatsu added, “It was such a ‘Eureka moment’ for all of us that we can contribute to closing the 40-year-old theoretical loop, and for me personally because my career in astronomy started when I looked at the stunning pictures of the Universe in the high school library, one of which was the iconic Crab Nebula taken by the Hubble Space Telescope.”

“The term Rosetta Stone is used too often as an analogy when we find a new astrophysical object,” said Andrew Howell, the leader of the Global Supernova Project. Howell is also a staff scientist at Las Cumbres Observatory and a member of the adjunct faculty at UCSB. “But in this case I think it is fitting. This supernova is literally helping us decode thousand-year-old records from cultures all over the world. And it is helping us associate one thing we don’t fully understand (the Crab Nebula) with another thing we have incredible modern records of, this supernova. In the process it is teaching us about fundamental physics: how some neutron stars get made, how extreme stars live and die, and about how the elements we’re made of get created and scattered around the universe.”

Las Cumbres Observatory (LCO) is a network of astronomical observatories run by a non-profit private operating foundation directed by the technologist Wayne Rosing. Its offices are in Goleta, California. The telescopes are located at both northern and southern hemisphere sites distributed in longitude around the Earth. For some astronomical objects, the longitudinal spacing of telescopes allows continuous observations over 24 hours or longer. The operating network currently consists of two 2 meter telescopes, nine 1 meter telescopes, and seven 40 cm telescopes, placed at six astronomical observatories. The network operates as a single, integrated, observing facility, using a software scheduler that continuously optimizes the planned observing schedule of each individual telescope.