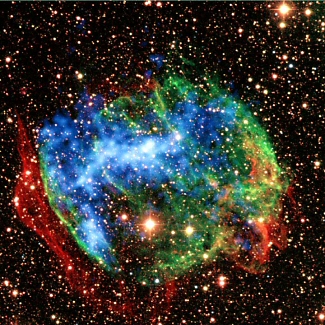 Combined data from NASA's Chandra X-ray Observatory and infrared observations with the Palomar 200-inch telescope have uncovered evidence that a gamma-ray burst, one of nature's most catastrophic explosions, occurred in our Galaxy a few thousand years ago. The supernova remnant, W49B, may also be the first remnant of a gamma-ray burst discovered in the Milky Way.

W49B is a barrel-shaped nebula located about 35,000 light years from Earth. The new data reveal bright infrared rings, like hoops around a barrel, and intense X-radiation from iron and nickel along the axis of the barrel.

"These results provide intriguing evidence that an extremely massive star exploded in two powerful, oppositely directed jets that were rich in iron," said Jonathan Keohane of NASA's Jet Propulsion Laboratory at a press conference at the American Astronomical Society meeting in Denver. "This makes W49B a prime candidate for being the remnant of a gamma ray burst involving a black hole collapsar."

"The nearest known gamma-ray burst to Earth is several million light years away — most are billions of light years distant — so the detection of the remnant of one in our galaxy would be a major breakthrough," said William Reach, one of Keohane's collaborators from the California Institute of Technology.

According to the collapsar theory, gamma-ray bursts are produced when a massive star runs out of nuclear fuel and the star's core collapses to form a black hole surrounded by a disk of extremely hot, rapidly rotating, magnetized gas. Much of this gas is pulled into the black hole, but some is flung away in oppositely directed jets of gas traveling at near the speed of light.

An observer aligned with one these jets would see a gamma-ray burst, a blinding flash in which the concentrated power equals that of ten quadrillion Suns for a minute or so. The view perpendicular to the jets is a less astonishing, although nonetheless spectacular supernova explosion. For W49B, the jet is tilted out of the plane of the sky by about 20 degrees.

Chandra's image and spectral data show that the jets of multimillion-degree-Celsius gas extending along the axis of the barrel are rich in iron and nickel ions, consistent with their being ejected from the center of the star. This distinguishes the explosion from a conventional type II supernova in which most of the Fe and Ni goes into making the neutron star, and the outer part of the star is what is flung out. In contrast, in the collapsar model of gamma ray bursts iron and nickel from the center is ejected along the jet.

At the ends of the barrel, the X-ray emission flares out to make a hot cap. The X-ray cap is surrounded by a flattened cloud of hydrogen molecules detected in the infrared. These features indicate that the shock wave produced by the explosion has encountered a large, dense cloud of gas and dust.

The scenario that emerges is one in which a massive star formed from a dense cloud of dust, shone brightly for a few million years while spinning off rings of gas and pushing them away, forming a nearly empty cavity around the star. The star then underwent a collapsar-type supernova explosion that resulted in a gamma-ray burst.

The observations of W49B may help to resolve a problem that has bedeviled the collapsar model for gamma-ray bursts. On the one hand, the model is based on the collapse of a massive star, which is normally formed from a dense cloud. On the other hand, observations of the afterglow of many gamma-ray bursts indicate that the explosion occurred in a low-density gas. Based on the W49B data, the resolution proposed by Keohane and colleagues is that the star had carved out an extensive low-density cavity in which the explosion subsequently occurred.

"This star appears to have exploded inside a bubble it had created," said Keohane. "In a sense, it dug its own grave."