There is a Reason Why We are Warped 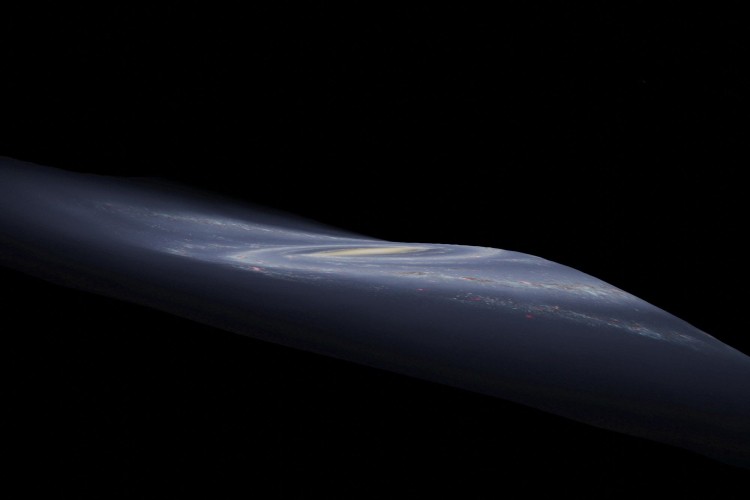 A representation of the Milky Way Galaxy showing its warped outer edges. Astronomers have known since 1957 that the Milky Way’s disc – where most of its hundreds of billions of stars reside – is not flat but somewhat curved upwards on one side and downwards on the other. For years, they debated what is causing this warp. They have proposed various theories including the influence of nearby galaxies, earlier galaxy collisions, or even the effects of an imaginary dark matter halo. (Image Credit: University of Virginia, Xinlun Cheng)

There is a Reason Why We are Warped

When most of us picture the shape of the Milky Way, the galaxy that contains our own sun and hundreds of billions of other stars, we think of a central mass surrounded by a flat disc of stars that spiral around it. However, astronomers know that rather than being symmetrical, the disc structure is warped, more like the brim of a fedora, and that the warped edges are constantly moving around the outer rim of the galaxy.

“If you have ever seen the audience making a wave in a stadium, it’s very similar to that concept,” said Xinlun Cheng, an astronomy graduate student in the University of Virginia (UVA) School of Arts & Sciences. “Each member of the audience stands up and then sits down at the correct time and in the correct order to create the wave as it goes around the stadium. That’s exactly what stars in our galaxy are doing. Only in this case, as the wave is going around the galaxy’s disk, the galaxy disk is also rotating around the center of the galaxy. In terms of the sports-fan analogy, it’s as if the stadium itself is also rotating.”

What caused that warp to occur has been the subject of debate. Some researchers suggest that the phenomenon is a result of the instability of the galaxy itself, while others assert that it is the remnant of a collision with another galaxy in the distant past.

A recent article published in The Astrophysical Journal by Cheng, who studies the movements of the stars, and his colleagues, Borja Anguiano, a post-doctoral research associate at UVA, and Steven Majewski, a professor in the College’s Department of Astronomy, may finally put that debate to rest.

Using data from the Gaia space observatory, a satellite launched in 2013 by the European Space Agency to measure the positions, distances and motions of billions of stars and information from APOGEE, an infrared spectrograph developed by UVA to examine the chemical composition and motions of stars, astronomers now have the tools to observe the movements of the stars in the Milky Way with an unprecedented degree of accuracy.

“It is now possible to characterize those movements with unprecedented accuracy because of the precision and statistical robustness of the huge catalogue of stars that has been probed by the Gaia satellite,” Majewski explained. “Meanwhile, our own large database of stellar chemistries generated by APOGEE gives us the unique ability to infer stellar ages. This allows us to explore how stars of different age participate in the warp and lets us zero in on when it was created. Knowing this, then, gives us an idea of why it was created.”

Using those data, Cheng and his colleagues have developed a model that characterizes the parameters of the galactic warp, where it begins in the outer disk, how fast the warp is moving and the shape of the warp. The model has helped them determine that the warp, which doesn’t affect our own sun, but is passing our solar system now at speeds that allow it to make a full rotation around the galaxy every 450 million years, is not a result of the Milky Way’s own internal mass. Instead, it is the relic of gravitational tugging on the Milky Way’s disk by the nearby passage of a satellite galaxy, possibly the Sagittarius Dwarf Spheroidal Galaxy, about 3 billion years ago.

“We can still see the disk of our galaxy shaking as a result,” Anguiano said.

The data the team collected from the new tools available to astronomers may be just the beginning of a new wave of discoveries about our universe and how it came to be.

“We’re entering an age in astronomy, especially in galactic astronomy, in which we are measuring the movement of the stars at such a level of precision that we can map their past orbital paths and start to understand how they may have been affected at earlier times and how other galaxies approaching our own interacted with stars as they were being born,” Anguiano said. “This level of precision has opened a new door to understanding our galaxy’s past and how it was assembled.”