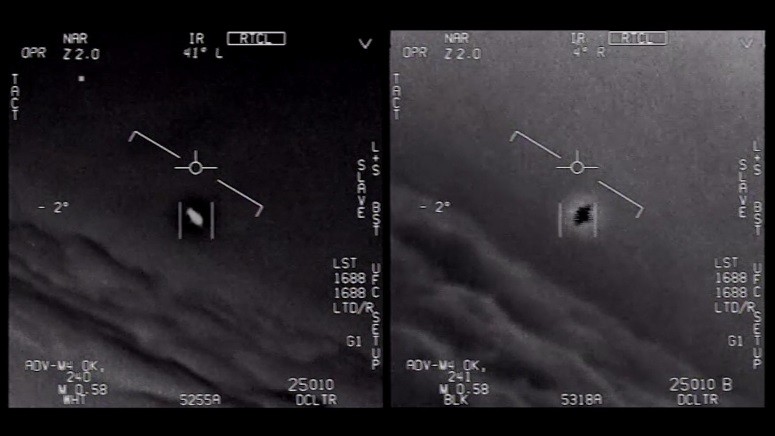 US Navy pilot: "Wow – What is that? Look at it fly." UFOs don’t exist, so I guess it must be an Unexplained Aerial Phenomena. Yea… Let’s go with that. (Image Credit: US Department of Defense)

An extraordinary 57 percent of all Americans believe Unidentified Flying Objects (UFOs) are real. UFOlogists and private UFO organizations are found throughout the United States. Many of these people are convinced that the US Government (and particularly the CIA) is engaged in a massive conspiracy and cover-up of the issue. The idea that CIA has secretly concealed its research into UFOs has been a major theme of these groups since the modern UFO phenomena started in the late 1940s.

According to the CIA, the UFO issue probably will not go away any time soon, no matter what the US Government does or says. The belief that we are not alone in the universe is too emotionally appealing and the distrust of governments around the world is too pervasive to make the issue amenable to traditional scientific studies of rational explanation and evidence.

But now, in an ironic twist of fate, UFO sightings have become so commonplace by Navy pilots patrolling coastal waters, that the US Navy has updated its guidelines for reporting these newly dubbed Unexplained Aerial Phenomena (UAPs). By formalizing the process, the US Navy has reduced the stigma for pilots who witness this unusual activity.

Sightings of unknown craft by military personnel don’t necessarily imply that the Navy believes Extra-Terrestrials are to blame, according to SETI Institute senior astronomer Seth Shostak. The Navy's changing rules are by no means an acknowledgement that alien spacecraft might be among the unidentified aircraft that have been reported, according to Shostak. “There’s always going to be a group of people that leaps to the more interesting conclusion,” he said. “But 90 percent of these sightings turn out to be a laundry list of things like birds, balloons, or other aircraft.”

But Shostak praised the US Navy for taking steps to ensure that military pilots who report these Unexplained Aerial Phenomena don’t "get laughed at."

Shostak reiterated his skepticism that these sightings indicate the presence of extraterrestrials on Earth. "If they are here, if they are sailing the skies, you have got to say -- They are really great house guests," Shostak said. "They never kill anybody . . . They don't even delay the flights out of Reagan."